At his recent Navy retirement ceremony, Capt. Ross Leuning received the Legion of Merit, a high-ranking award given for exceptionally meritorious conduct in the performance of outstanding achievements in the military service consisting of actions having a quality of an unusual requirement or remarkable complexity carried out in an unexpected and obviously extraordinary way. 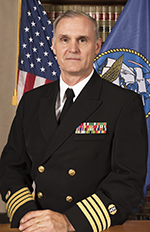 According to a press release, Leuning served 38 years in the military, starting as a private in the Army National Guard while still a senior in high school. He served as a combat engineer and later as a combat medic while putting himself through the University of South Dakota and then the University of Oregon School of Law. He finished his National Guard career as a specialist 5. After getting his Juris Doctorate, Leuning chose a career in the Navy’s Judge Advocate General Corps. During his Navy career, he rose from ensign, to lieutenant junior grade, lieutenant, lieutenant commander, commander and finally to captain.

Leuning had many assignments during his long Navy JAG career, including criminal defense counsel, senior prosecutor, assistant professor at the U.S. Naval Academy, appellate counsel, force judge advocate for the naval base at Yokosuka, Japan, and served worldwide as a general courts-martial military judge for four years.

In 2010, after 30 years of combined military service, Leuning was set to retire. He had served six years in the Army National Guard, five years active duty Navy and 19 years in the Navy Reserves — during which time he also maintained a civilian legal career. At what he thought was his last military judges conference, Leuning heard about another JAG who had been involuntarily recalled to active duty for assignment in Iraq, a great hardship to that officer and his family. Instead of retiring, Leuning volunteered to take the other officer’s place and a month later was deployed for a year in Iraq as command judge advocate for base command group, Al Asad. While deployed, Leuning interviewed with Gov. Mark Dayton via Skype and was appointed a Judge in Minnesota’s Third Judicial District upon his return from Iraq in August 2011.

It is for Leuning’s final assignment that he was awarded the Legion of Merit. In 2016, he reached 30 years of Naval service and statutory retirement. At the request of the Navy, he served an additional 14 months beyond statutory retirement to help create the Navy’s Preliminary Hearing Officer Unit, a command created in April 2016 dedicated to performing preliminary hearings for active duty Navy in sexual assault cases and other high visibility cases.

The formation of the command was aimed at ensuring that independent, experienced, high-ranking JAG officers performed preliminary hearings in all Navy sexual assault cases.

Leuning developed new hearing procedures, preliminary hearing officer training materials and a new reporting format and procedure. Leuning presided over the first serious sexual assault preliminary hearings performed by this new command and over many high visibility cases, including some of the first cases looking into the Fat Leonard bribery scandal in Singapore.