An Albert Lea man who allegedly possessed nearly 50 grams of methamphetamine Monday was charged with a felony the following day in Freeborn County District Court. 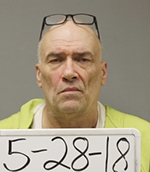 Court documents state Iverson was charged after an Albert Lea officer responded to a report of an attempted break-in early Monday at an Albert Lea restaurant.

When the officer arrived, he reportedly saw Iverson standing near a vending machine near the entrance of the restaurant with a black knife in his hand, and he allegedly appeared to pry at the coin slot of the machine.

Court documents state Iverson dropped his knife and said he was trying to get a soda can from the machine.

The officer reportedly saw a tool bag within a canvas bag and items he recognized as tools to measure and distribute illegal drugs.

Judge Steven Schwab set conditional bail for Iverson at $5,000, contingent on him submitting to random testing, not entering bars or liquor stores and following other court requirements.

Iverson’s next court appearance is scheduled for Thursday.

Meth possession carries a maximum sentence of 25 years in prison and a $500,000 fine.