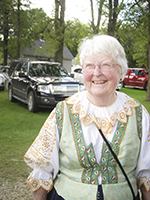 Marie Krikava, widely known in southern Minnesota as the “kolache lady,” died Thursday, May 10, 2018, after a long battle with cancer. She was 87.

For decades, Marie (with assistance of her husband, Alton) baked thousands of the Czech pastries to support community celebrations around Glenville. Though she was not of Czech descent, throughout her married life she became immersed in Czech culinary and cultural matters.

Marie was born April 22, 1931, in La Crosse, Wisconsin, to Alfred and Margaret Pieper. In 1941 the family moved to Albert Lea, where her father owned and operated Al’s Shoe Repair.

In 1950 she married Alton Krikava, and the town girl became a farm wife. They lived for a short time in a small house at the edge of Myrtle before moving to the Krikava farm in Hayward Township, where she lived for the remainder of her life.

As a young bride, she was taught the art of baking kolaches by a neighbor who believed “to be a good Czech wife, I had to know how to make kolaches” Marie told a reporter in a 2011 interview. It was a lesson she learned well, and her reputation as the kolache lady was born. Ann Burckhardt, the former food editor for the Minneapolis Star Tribune, ran a feature article on Marie’s kolache baking in 1997 and included Marie’s recipe in her book “A Cook’s Tour of Minnesota,” published in 2003 by the Minnesota Historical Society Press.

Of course, being a good Czech farm wife involved much more than just baking kolaches. For many years, the family tended thousands of layer hens and Marie was in charge of the egg production operation. Marie kept the books for the farm and was a true partner in its operation and success. She also planted a large garden every spring, growing much of the family’s vegetables and canning and freezing the harvest for family meals during the winter months. She kept gardening into her 80s, until she no longer had the stamina to do the work.

The hall was built in 1909 as a place for meetings, weddings and community events. The facility continues to be operated by Zare Zapudu Lodge No. 44, affiliated with Western Fraternal Life (WFLA). Marie’s involvement with the hall began by baking kolaches to support events held there. Eventually, she was recruited to serve as the lodge treasurer. In 2013, the WFLA honored her with its national Fraternalist of the Year award.

Marie was of German extraction but always referred to herself as American. Nevertheless, she loved Czech culture. She demonstrated her assimilation into that culture in many ways. Over the course of 40 years, Marie and Alton traveled frequently to the Czech Republic. After Alton retired from farming, they went twice a year, usually staying for four to six weeks at a time. There they reconnected with relatives, made many new friends and did genealogical research. Finally, the rigors of international travel became too strenuous, and they quit traveling. But in 2016, their children planned a two-week trip which was a highlight for both of them.

Marie was a devout member of the Lutheran church, where she was active in the women’s circle and attended Bible studies.

She is preceded in death by her parents and by a grandchild, William Francis Bodine.

She is survived by Alton, her husband of 67 years; by her brother, Alfred Pieper (Virginia), of Mendota Heights; and by children Steven Krikava (Linda Singer) of Edina, Dr. Joan Krikava (James Bodine) of New Ulm, the Rev. James Krikava (Peggy) of Prague, Czech Republic, Michael Krikava (Martha) of Stillwater and Richard Krikava (Shannon) of Cloquet. She also is survived by 13 grandchildren and 15 great-grandchildren, and many nieces and nephews.

In lieu of flowers, the family prefers memorial donations to the Bohemian Brick Hall Association (c/o Dan Belshan, 85486 157th St., Glenville, MN 56036); or a charity of the donor’s choice. Plans for a memorial service at Brick Hall are pending.