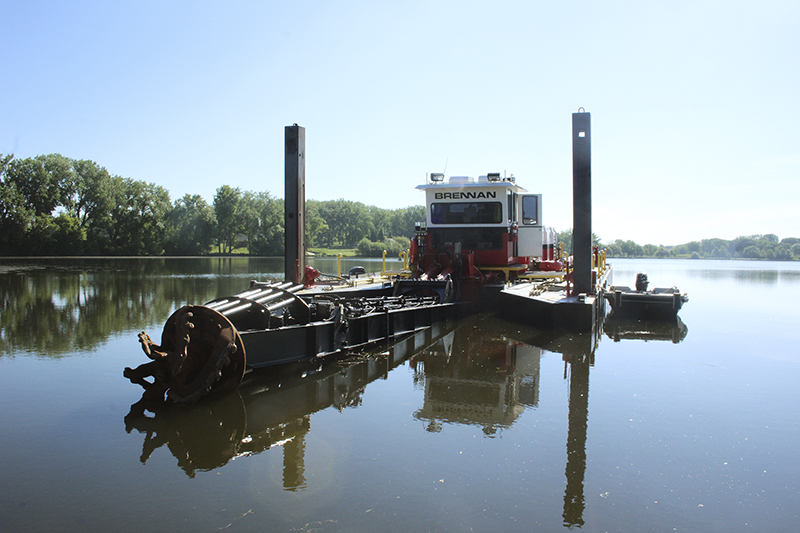 The dredge, equipped with cutterhead, sits in Edgewater Bay on Thursday at the boat landing as it continues to be prepared for its launch. - Sarah Kocher/Albert Lea Tribune

Dredge components to work together to relocate sediment

There’s a reason another term used for the dredge cutterhead is a “fish mouth.” The auger’s teeth cut through sediment on the bottom of the lake, and it then sucks that sediment through the esophagus of the dredge, traveling the length of the pipeline until it is finally deposited into the stomach that is the confined disposal facility.

“The cutterhead is the driving factor,” J.F. Brennan site manager Ryan Sands said of the dredge’s operation. Brennan, a dredging and marine construction company, is responsible for dredging Edgewater Bay, chosen for the project by the Shell Rock River Watershed District board.

The dredge arrived at the Edgewater Bay boat ramp Wednesday, and the center hull, which Sands said weighs 101,000 pounds, touched the water close to 11:30 a.m.

“It’s about a week’s-worth of time to assemble (everything),” Sands said.

Dredging is slated to begin June 15.

Hydraulic dredge operator Wesley Groth, who works for Brennan, said the dredge’s cutterhead can go through a bit of rock, but he would have to shut it down if he encountered cable, rope or large debris until it is cleared up.

The cutterhead can remove between 5 to 7 feet of sediment at a time, Groth said, and does so by being swept side to side in an arc with an approximately 150-foot reach. 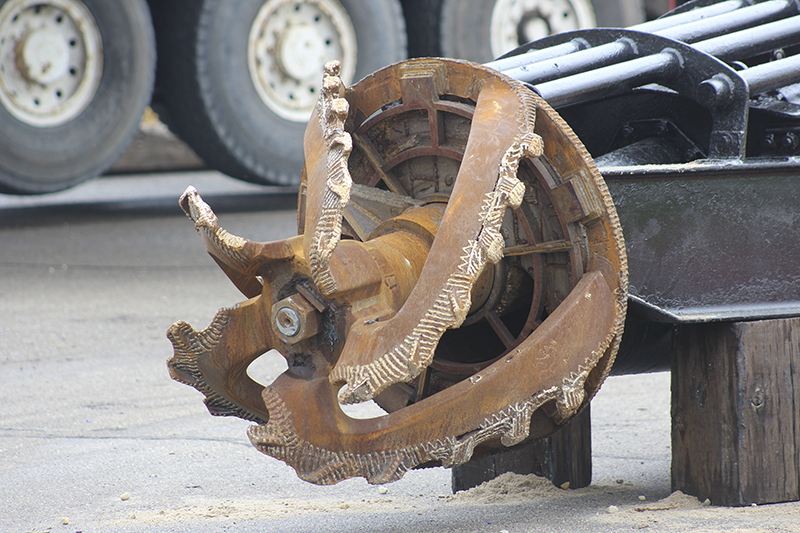 The auger disturbs the lake bottom and then uses suction to remove the sediment, which it transfers through the pipeline to the confined disposal facility. – Sarah Kocher/Albert Lea Tribune

While the dredge is working, Groth will receive information from calibrated sensors that help him get a visual depiction of the dredge relative to a design simulation of the lake bottom provided by the DNR and Watershed District, Sands said. When the dredge hits the bottom, he will be able to see it.

He will also be able to feel it.

Sands said the rate of sediment removal depends on the type of sediment, but the team is hoping to average between 225 and 250 cubic yards of material per hour in Edgewater Bay. He said this is the company’s standard sediment removal target for a scenario like this one.

After the sediment has been disturbed and sucked up, it’s time for it to travel. Suction power is generated by the engines within the center hull, but sediment relocation to the CDF is powered by booster pumps. One will be a floating booster behind the dredge, Sands said, and there are also boosters in the landfill area that help move the sediment on down the line.

Upon arrival at the CDF, the sediment and accompanying water settle, Watershed District Administrator Andy Henschel said. The sediment drops to the bottom. Water is then skimmed off the top through the CDF’s weir system, which funnels that water back into an unnamed creek and, eventually, finds its way back into Fountain Lake and Edgewater Bay, leaving the sediment behind to gradually fill the CDF.

Sands said the dredge and accompanying equipment are closely monitored and maintained during the process.

Groth said Brennan isn’t the only one who should have an eye on the dredge. Both Groth and Sands encourage boaters to maintain an awareness of the dredge and the approximately 1,000 feet of floating pipe behind it.

“I’m trying to do them a favor by coming down and cleaning up,” Groth said.

Henschel said there will be buoys and signs reminding boaters there is a dredge at work, as well as visible and submerged pipeline in Edgewater Bay. The pipeline will be marked. Boaters are asked to keep a respectful distance from the dredge. 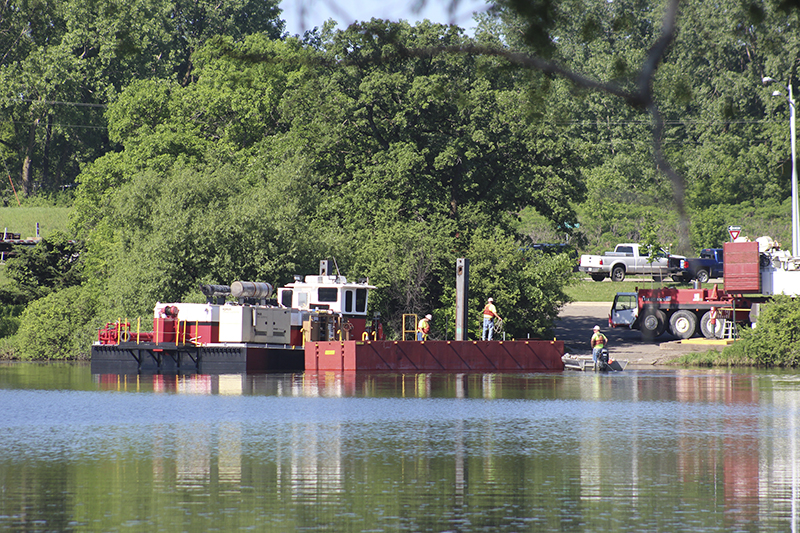 Brennan workers, standing on a Flexifloat which will later be used to hold the booster pump, continue to prepare the dredge and necessary equipment for the dredging. – Sarah Kocher/Albert Lea Tribune