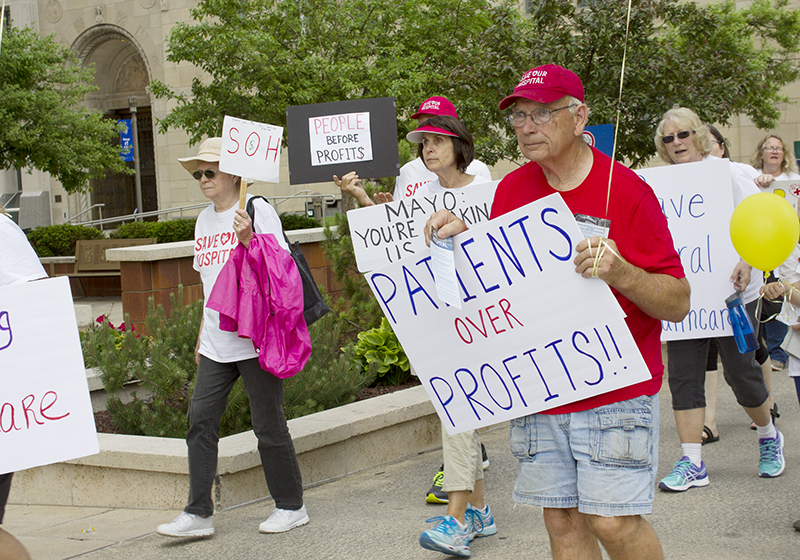 Marchers claimed Mayo Clinic is prioritizing profits over patients by enacting the transition of most inpatient services from Albert Lea to Austin. - Sam Wilmes/Albert Lea Tribune

Save Our Hospital rallies around announcement anniversary

ROCHESTER — Approximately 50 Save Our Hospital members marched in Rochester on Wednesday, deriding Mayo Clinic Health System for its decision to transfer most inpatient services from Albert Lea to Austin.

The march came about one year after the hospital system announced the transition, a move that sparked the creation of the group. 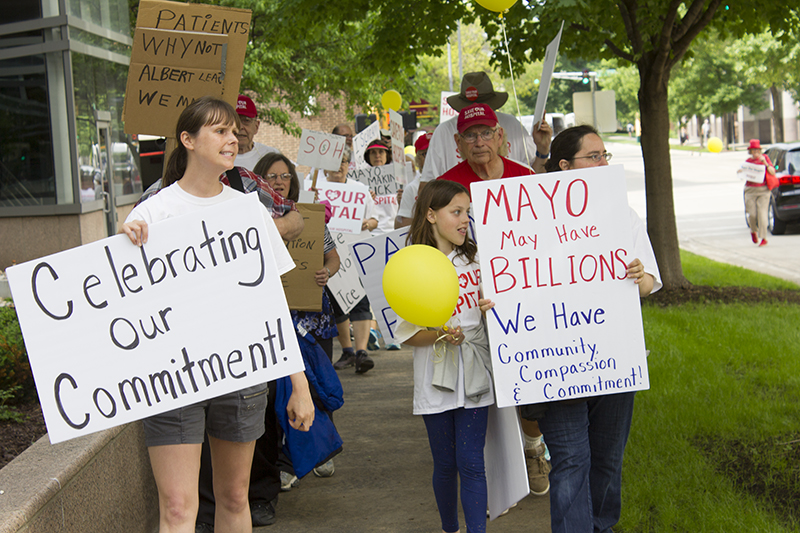 Marchers also distributed lemonade to people who walked by, a symbol of what the organization said has been the community’s ability to make lemonade out of lemons caused by the decision to transfer most inpatient services.

The march is the second the organization has had in Rochester. Approximately 150 Save Our Hospital members marched in Rochester last August and chanted similar sayings.

Jennifer Vogt-Erickson said the hospital system should use some of the proceeds from a recent $3.7 billion fundraising campaign to keep all inpatient services in Albert lea.

“They could find some crumbs to keep our hospital open, because they are responsible for our health care, too,” she said. 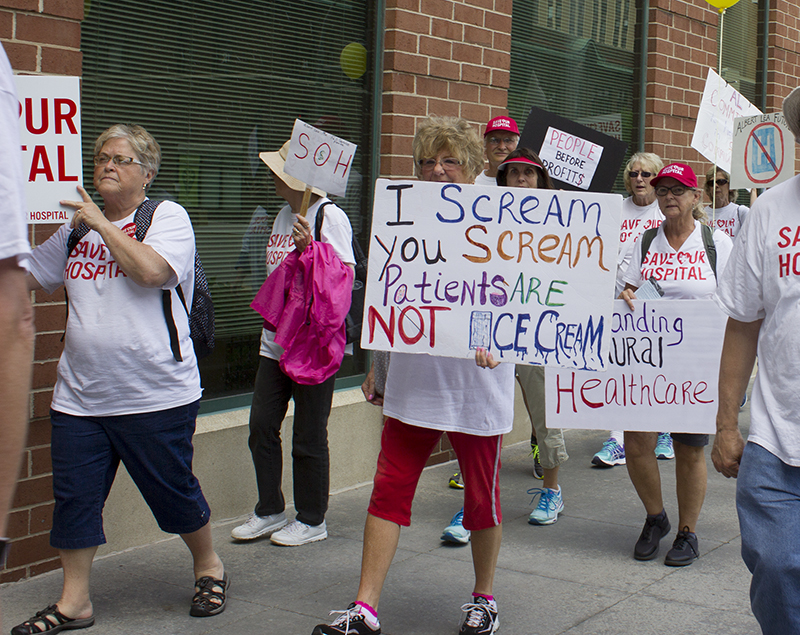 Vogt-Erickson has not ruled out the possibility Mayo Clinic Health System will decide to end the transition.

“I always hold out hope that they might change their position, but at the same time, their track record is, ‘No, no, no, no,’ so, not depending on that at all, that that is going to change.”

In a written statement Wednesday, Mayo Clinic spokesman Ricky Thiesse said the hospital “understands the emotions associated with our decision to make difficult decisions to ensure the long-term sustainability of our community practice in Albert Lea.”

“Mayo Clinic is deeply committed to the communities we serve, including Albert Lea, and will continue to provide high-quality care close to home for generations to come,” he said.

“That’s why we’ve committed more than $5 million in additional investment into the Albert Lea campus, to include upgrades and additions to the cancer center, behavioral health and radiology departments, along with paving the way for future renovations.” 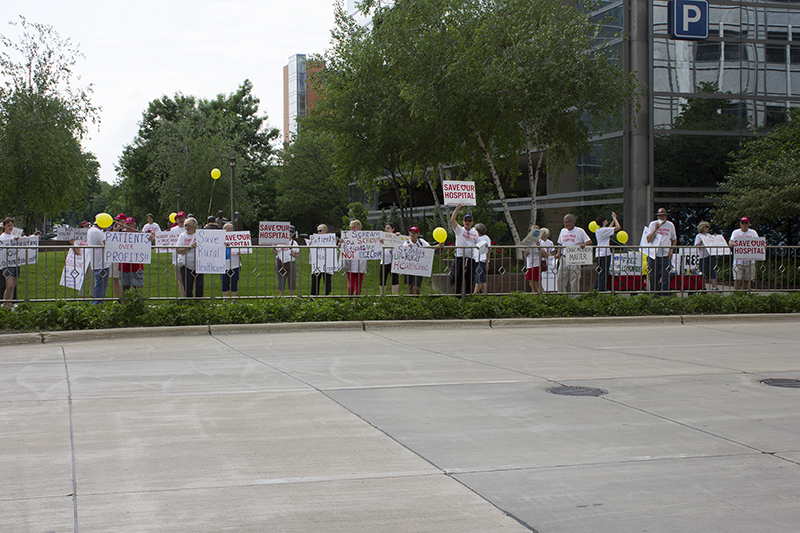 Approximately 50 Save Our Hospital members chant messages of support for bringing back a full-service, acute-care hospital to Albert Lea and derision of Mayo Clinic Health System’s transition of most inpatient services to Austin. – Sam Wilmes/Albert Lea Tribune

Vogt-Erickson said Save Our Hospital is working with city and county officials to secure an alternative provider, adding they are attempting to hire a health care consultant to handle their next steps.

She predicted there will be benefits to having an alternative provider in Albert Lea.

“The competition will help bring down prices, which will be beneficial to consumers and to businesses,” she said.

“It will end up being better in the long run. I am starting to feel a lot more positive about it. I know we have a long road ahead of us still.”

She said moving inpatient services has caused hardships for residents, noting the area has a significant population of senior citizens who need services close to where they live.

Albert Lea resident Jody Kirchner said she attended the march to show her commitment to the organization. 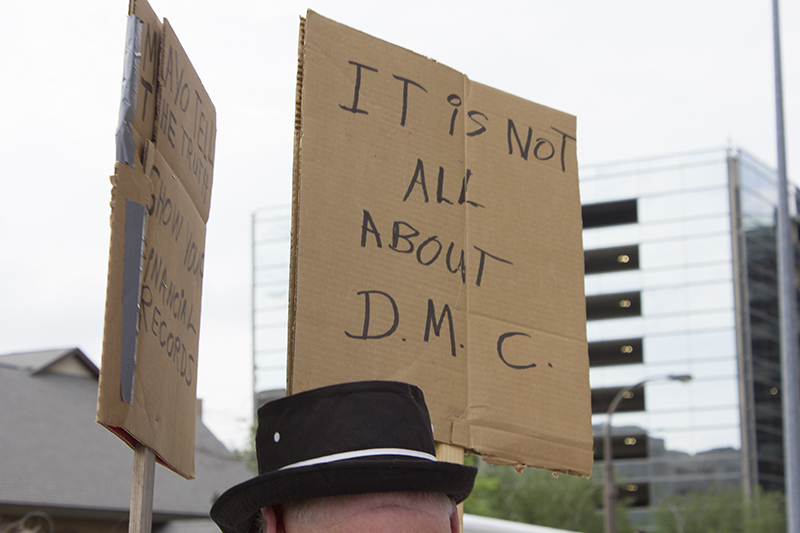 “I had a 11-week premature baby 19 years ago, and if I had him now without a hospital and had to go to Austin, I wouldn’t have made it,” she said.

“We’re committed. We appreciate the doctors with Mayo, the nurses with Mayo. We wish they would look at rural health care as a whole.”

As part of the transition, the ICU moved last October. Inpatient surgeries are expected to move to Austin next month, and the inpatient behavioral health unit will move to Albert Lea this fall. Medical and surgical hospitalizations will move to Austin early next year, with childbirth services shifting to Austin in 2020. 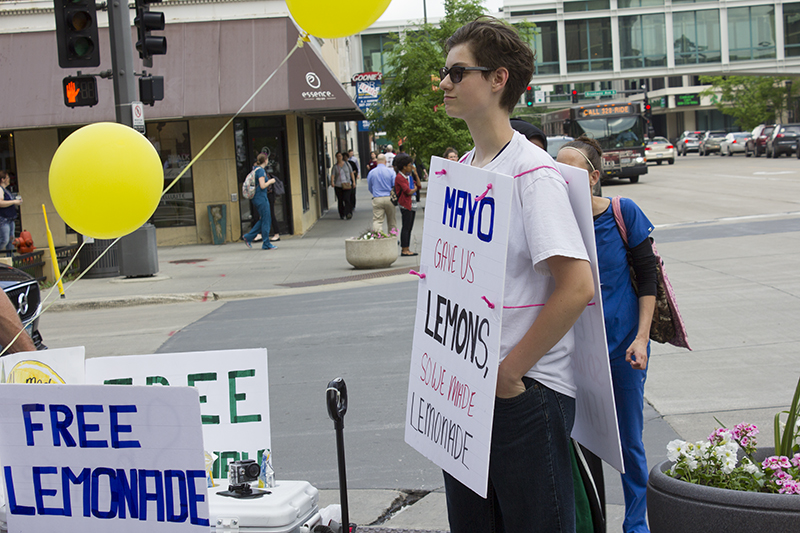 Marchers offered free lemonade to people walking by to symbolize what they said was the strength of the Albert Lea community after Mayo Clinic Health System announced last June that it would transition most inpatient services from Albert Lea to Austin. – Sam Wilmes/Albert Lea Tribune

Albert Lea resident Taryn Israel Nechanicky attended the event holding a sign, “This is what a patient revolution looks like.” Her daughter, Anais Israel Nechanicky, held another sign, “Mayo may have billions. We have community, compassion and commitment.”

Taryn Nechanicky, who has Type 1 diabetes, said being taken to Austin could make a serious health situation worse by prolonging the time before she arrives at the hospital.

“It’s dangerous, the further you have to go,” she said.

“The proximity to treatment is very important.”

Taryn Nechanicky said she was concerned for her retirement-aged parents and people who live west of Albert Lea.

“We want the same full-service hospital they have always had,” she said. 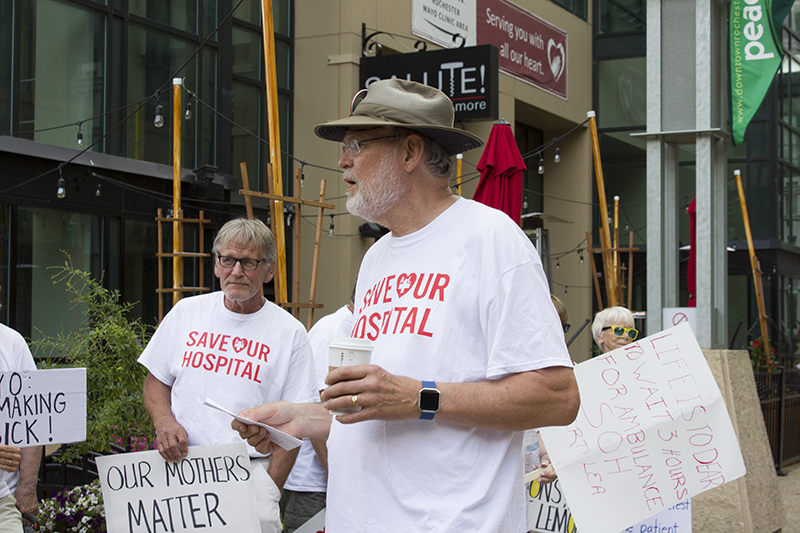