Session failures will have consequences for many Minnesotans 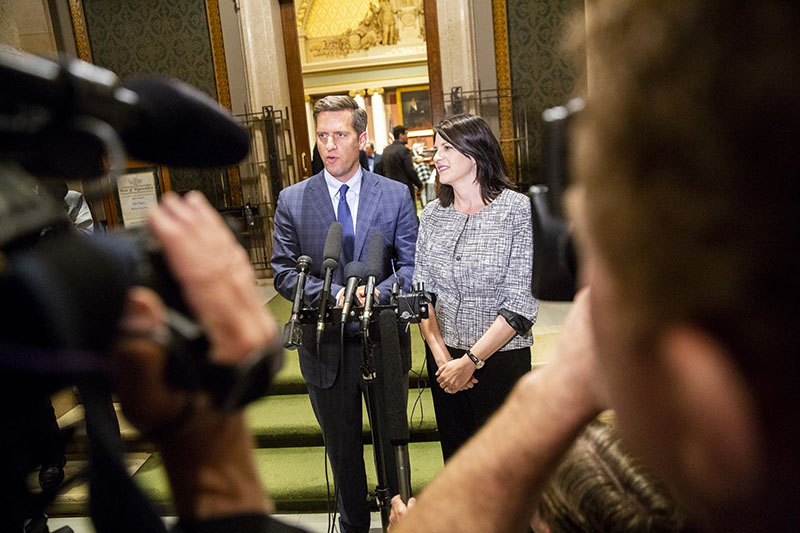 Speaker of the House Kurt Daudt and House Majority Leader Joyce Peppin speak to the media after adjourning the legislative session inside the Minnesota State Capitol on Sunday. - Evan Frost/MPR News

As the 2018 session of the Minnesota Legislature ended Sunday night with DFL Gov. Mark Dayton promising to veto the major tax and spending bills passed by majority Republicans, people outside the Capitol were trying to process what exactly the messy finish means for them.

“I’m still stunned,” said Elizabeth Bystrom, a CPA who owns her own firm in White Bear Lake. She was counting on Republicans and Democrats to agree on a plan to conform the state tax code with the massive federal overhaul passed in December.

Republicans in the Legislature sent Dayton a tax conformity bill Sunday that would cut income tax rates and de-link Minnesota’s tax code from the federal system to allow the state to set its own deductions and exemptions. But Dayton said he would veto it, in part because he said it skews tax breaks toward the wealthy and corporations.

Bystrom works with small businesses to file their taxes, and the potential for no tax conformity bill this year has her already planning for a stressful tax season. Without conformity, tax forms will be more complicated to fill out, and some Minnesotans could be facing a tax increase. A new governor and Legislature could come back in January and try to pass a deal, but Bystrom said she starts her work for the tax season long before then.

“The degree of complexity is astounding,” she said. “It’s going to be very complicated, and it’s going to take a lot of explaining to my clients why the numbers are what they are.”

Dayton had vetoed an earlier tax bill because lawmakers did not give him $138 million in aid for schools, which the governor said are facing a fiscal emergency that will lead to teacher and staff cuts in many school districts.

The uncertainty is unsettling for Joe Gothard, the superintendent of the St. Paul Public School District, which is setting its next budget. The district is facing a $17.2 million shortfall, which could mean layoffs or not hiring up to 50 teachers and 35 support staffers.

“There’s no way to make that kind of reduction without it being people in the organization,” Gothard said.

The school shooting in Santa Fe, Texas, this week also brought the issue of improving security at schools back to the forefront in the final days of session. Both parties said they wanted to pass something this year, but $20 million in school safety funding is also wrapped into the controversial tax bill.

“People are scratching their heads at the thought of school safety being discussed for the last three months and for nothing to happen,” Gothard said. “It’s really disappointing.”

It’s not a budget year, so technically lawmakers don’t have to pass anything. But an unusual number of high-profile issues cropped up since last year, including the major federal tax changes, the shortfalls in school budgets and the botched summer rollout of a state licensing and registration renewal system, known as MNLARS, that is still plagued with technical glitches.

The people charged with helping frustrated Minnesotans renew their car tabs and license plates, known as deputy registrars, were also caught up in the uncertainty and end-of-session gridlock. Dayton vetoed a $9 million funding bill for the state’s more than 170 deputy registrar offices, some public and some private, who were hit especially hard by overtime and other costs related to the glitches with MNLARS.

“Offices have taken out their retirement money and put that into their businesses to keep the doors open because of the poor functioning of MNLARS,” said Kelly Davison, who owns a license center in Prior Lake. “Other offices are maxing out personal credit cards to try and keep their doors open. Some of us have second mortgages and have houses up for sale.”

Without the funding, some offices will have to close their doors, Davison said. A number of Democrats supported the proposal, but Dayton vetoed the bill because it didn’t also include money to make more improvements to the MNLARS computer system. That would give all Minnesotans “the efficient, defect-free system they deserve,” Dayton wrote in a letter to legislators.

The House tried to override Dayton’s veto Sunday night, but the effort fell short of the necessary 90 votes to pass.