The Panthers get back to their winning ways 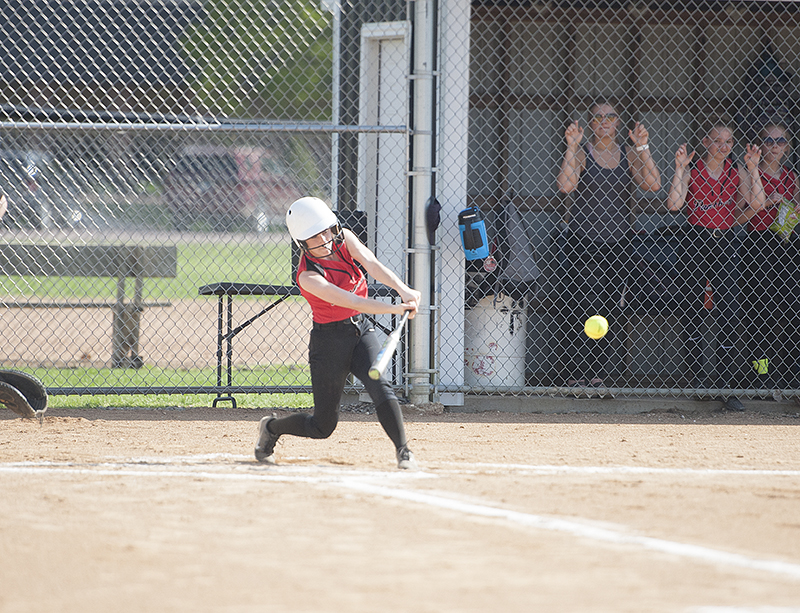 NRHEG sophomore Paige Knudson gets the first hit of the game for the Panthers. Knudson would go 2-3, with an RBI double and a walk in the 7-3 win over Maple River. - Tyler Julson/Albert Lea Tribune

NEW RICHLAND — The NRHEG softball team hosted Maple River on Friday night, hoping to bounce back from a tough one-run loss the night before.

Despite falling into an early 3-0 hole, the Panthers battled back with a big second inning to beat the Eagles, 7-3.

The Eagles got the scoring started right away in the matchup, scoring two runs in the top of the first inning. The first came after an error allowed the baserunner to get all the way to third base, followed by a passed ball to bring her in. The second came on an RBI single. They would add another run to their total in the second to go ahead 3-0 early.

Just when it looked like the game might sneak away from the Panthers, they stormed back with a massive second inning at the plate. 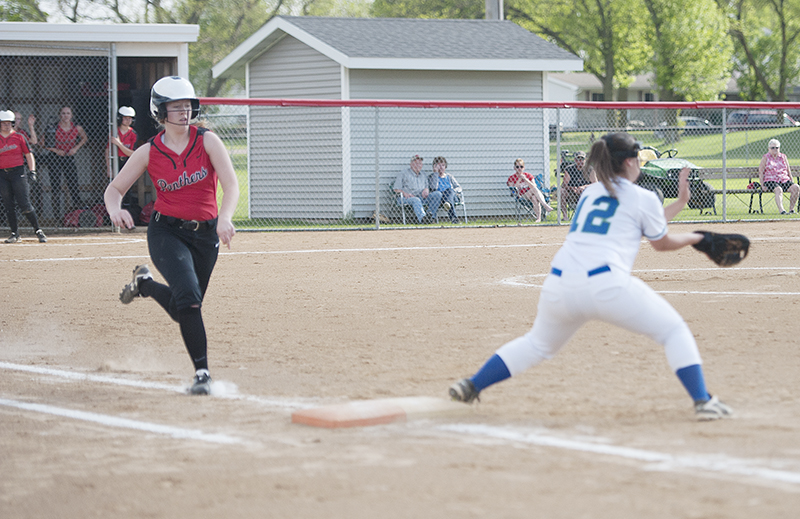 NRHEG junior Alexis Anderson attempts to beat out the throw Friday afternoon against Maple River. The Panthers came back from a 3-0 deficit to beat the Eagles, 7-3. – Tyler Julson/Albert Lea Tribune

Eighth-grader Sophie Stork started the rally with a deep double, which was followed by an RBI single from freshman Cloie Arndt. Freshman Sarah Johns would reach on a single and freshman Grace Tufte would bat both Arndt and Johns in on a two-RBI triple. With the score tied at three, a passed ball by the Eagles would push Tufte across, taking a one-run lead for the Panthers.

However, they weren’t done just yet. Seventh-grader Sidney Schultz would be walked and batted in by Paige Knudson on an RBI double.

NRHEG would go on to shut Maple River down defensively through the next five innings, allowing just two hits throughout the rest of the game.

In the fourth inning, Johns led off by crushing a monstrous home run to add another run to the Panthers total. Schultz would reach on a fielder’s choice, but was brought in on an RBI single from eighth-grader Ava Kyllo to notch another insurance run.

NRHEG would continue its domination through the end of the game, as it got back on the winning track.

Stork started on the mound for the Panthers. She would pitch all seven innings, allowing three runs, only one of which was earned. She allowed just five hits and one walk, while striking out an impressive 10 batters.

The Panthers climb to 9-7 on the season and wait to learn their draw in the Section 2AA tournament, which will be released Saturday.