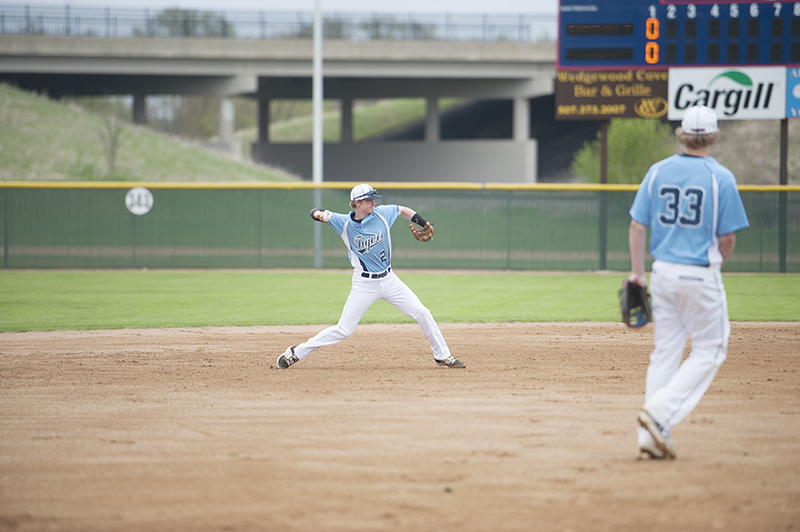 Albert Lea senior Ty Harms gathers the ground ball and makes the throw from shortstop recording the out. Albert Lea would go on to win both games against Faribault in Saturday’s doubleheader. - Tyler Julson/Albert Lea Tribune

The Albert Lea baseball team hosted Faribault Saturday in a doubleheader as it hoped to keep its momentum rolling after a one-run win against Northfield Thursday.

Two sophomore pitchers took to the mound starting both games and dominated in nearly every facet of the game, earning two wins for the Tigers, 2-0 in game one and 9-1 in game two.

The first contest was a low-scoring, defensive outing, with only  two runs being scored between the two teams.

Sophomore Koby Hendrickson started on the mound and pitched a complete game for the Tigers. He would strike out five batters and allow just four hits and four walks in seven innings pitched.

“Koby was fantastic,” said head coach Sean Gaston. “I am really proud of his ability to make adjustments and, most importantly, compete. I feel like he willed himself to winning that game and picked up our team in the process.”

The only runs scored in the game came in the fourth inning when seniors Logan Stadheim and Garret Piechowski got on base with singles and juniors Dalton Larson and Brock Hammer hit back-to-back RBI singles to give the Tigers a two run advantage. 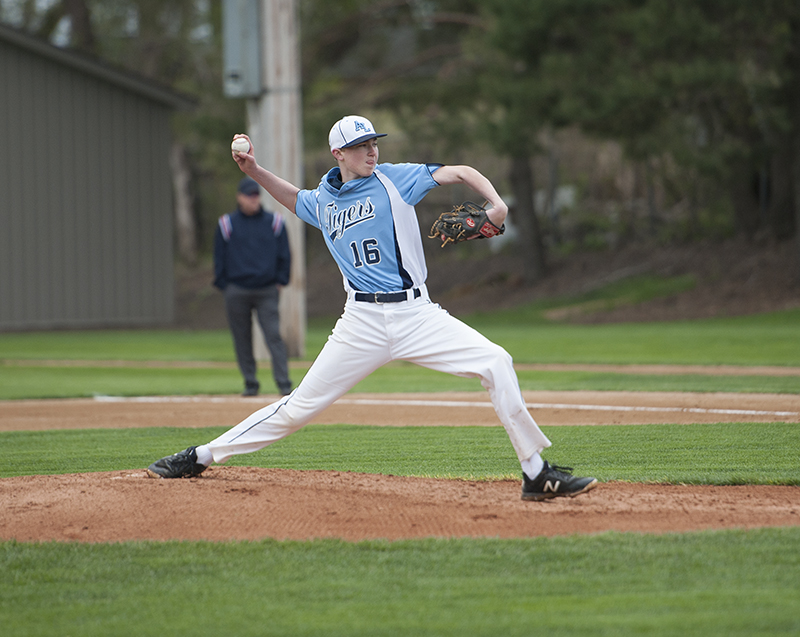 Stadheim was the top performer at the plate for Albert Lea in game one. He went 2-3, scoring one run, while also making an incredible catch that saved the team some runs.

“We played a very solid game,” Gaston said. “Logan (Stadheim) was fantastic with a great play in right and an awesome day at the plate. He has really stepped up his game and his leadership.”

In the second game, the Tigers made it clear who was in control from the very beginning. Sophomore Gavyn Tlamka was the starting pitcher for the Tigers and also had a fantastic outing. Tlamka also pitched a full game, allowing just one unearned run on four hits and no walks, while striking out four batters.

“A great win to end the week,” Gaston said. “The boys came out fired up. Gavyn (Tlamka) did a great job attacking hitters. If he can keep that attitude and focus with everything he does, he will be very successful.”

Albert Lea scored two runs on six hits and made one error. Faribault scored zero runs on four hits and recorded one error.

The Tigers opened up a five-run lead in the first inning by batting around the lineup. Junior Carson Goodell and Stadheim started the game off with back-to-back singles, followed by senior Alex Goodmanson reaching on a perfectly laid down bunt.

With the bases loaded, senior Zach Edwards hit a sacrifice fly to deep center field to score one run. Junior Carter Simon would load the bases back up after a walk, allowing Piechowski to record an RBI sacrifice hit. Junior Parker Anderson brought in two runs with a single, leading to two errors by the Falcons and another run crossing the plate.

The Tigers would add another run in the third inning after an RBI single from Hammer. The Falcons would get their one and only run of the day in the next half inning after an error put two runners into scoring position and one was batted in.

However, Albert Lea would add three more insurance runs in the sixth inning when three walks and an error pushed one run across, followed by an RBI single from junior Jake Ball and a shallow sacrifice-fly from Piechowski.

Hammer was a perfect 3-3 from the plate in game two, bringing his daily total to 5-6 with three RBIs.

“Our goal every week is to win the week and we did that,” Gaston said. “I am excited for our guys to put together a string of good games. It was also great to get contributions from so many guys. Brock Hammer and Parker Andersen had big games. Brock played a solid day, both games and on both sides of the ball.”

The Tigers extend their winning streak to three and climb to 5-7 overall. They will be back in action Tuesday, when they travel to Mankato West for another doubleheader.