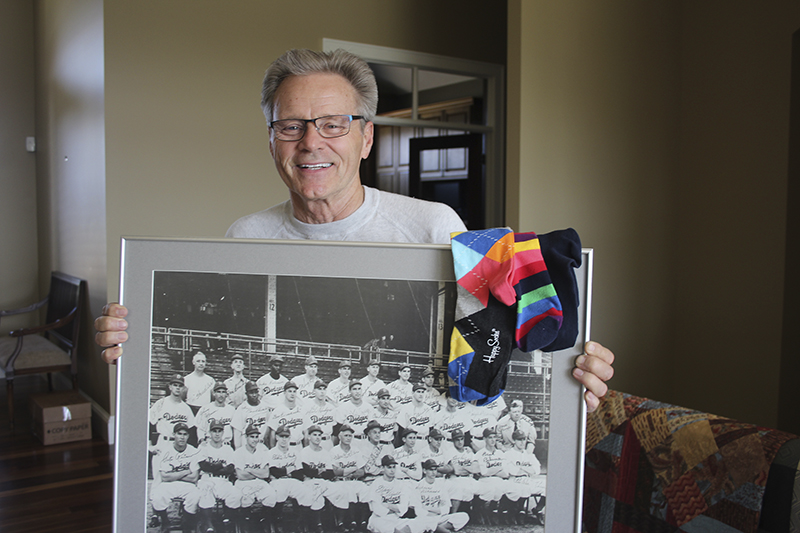 Dr. Stephen Thorn previously practiced in California for several years and grew up in the heart of Hollywood. He’s a big baseball fan, and one of his patients gave him this photo, autographed by each of the pictured members of the Los Angeles Dodgers. - Sarah Kocher/Albert Lea Tribune

There are two standard expectations for a visit to this particular OB-GYN office. The first: peeking out of the gap between the doctor’s shoes and trousers will be more than a hint of color. It might be argyle today, or rainbow stripes in a mixed-up order, or (likely) a pair the patient hasn’t seen before; after all, he estimates he has close to 200 pairs of socks, several of which were gifts from his patients.

Be prepared to spend more than a little time in the waiting room. Dr. Stephen Thorn is a busy man.

But as of May 18, things are changing. May 18 is Thorn’s last day at Mercy Medical Center North Iowa in Mason City. Over 7,000 baby deliveries later, the OB-GYN is headed not to the office, but for Arizona, where he will begin his retirement after almost 40 years in obstetrics and gynecology.

He’s making the move to be closer to his grandchildren — he has 10 and one on the way, and several of them are in Arizona, with a handful more in neighboring states. It’s also time to spend some more time with his wife. They’re both healthy, and Thorn said retiring now means the two are still able to enjoy that health in retirement.

“I think I’m ready, because I lived by a schedule my whole life,” Thorn said.

Thorn, 69, and his wife, Margie, have lived in Albert Lea since 1987. Thorn worked at the Baby Place at Mayo Clinic Health System in Albert Lea until 2011, when he began at Mercy.

It’s there that, until May 18, patients wait in turn to see the doctor. They wait because he is taking his time with the person ahead of them.

“I will never rush,” Thorn said. “I have never rushed a patient.”

He said it drives his nurses crazy. But he’s been using that time to make a connection; he’s finding out about his patients and their families.

“What happens is that, for example, when you do an obstetrics care or you do a GYN care for a while or you do fertility, they’re not patients anymore,” Thorn said. “They’re kind of friends.”

His policy is to treat them the same way he would treat his own family.

“Patients don’t always care what you know,” Thorn said. “They care that you care.”

According to Amy Sauke, who has worked as a nurse for Thorn the whole time he has been at Mercy North Iowa, he does.

“He just truly cares about the whole individual, not just the reason for their, the appointment,” she said. “… I mean, just the physical, the mental, the emotional, the spiritual, all of it combined. He treats them with dignity. He really listens.”

At St. Mary’s College in San Francisco in 1971, Thorn graduated pre-dentistry. He had been raised in the middle of Hollywood. His dad was in trucking; his mom, accounting.

“To be very, very honest, I wasn’t a stellar student because I liked the beach too much,” Thorn said.

After graduating, he worked for a pharmaceutical company for a year and a half before following a friend down to medical school in Guadalajara, Mexico. Before he could study there, he had to pass a proficiency test in Spanish. He estimates his Spanish knowledge prior to that test encompassed all of three words.

He studied some. He passed. After a medical aptitude test, he was accepted and studied there until 1976. He turned around to come back and practice in the U.S.

“You had to pass all these tests even to get back in the United States,” Thorn said.

When he came back, he completed his Fifth Pathway, an American Medical Association program that allows students who attend an international medical school — like, for instance, one in Guadalajara — to do their supervised clinical work at a medical school in the U.S. For Thorn, that school was University of California-Irvine. After his residency at University of California-Davis, he did six years of private practice in California.

Through his supervised clinical work at University of California-Irvine, he had the opportunity to rotate through some different medical fields at Long Beach Memorial Medical Center.

He liked cardiac work, but it required a 10-year residency.

General surgery was too much of the same thing every day.

Not so as an OB-GYN, Thorn said.

“There’s no boredom there,” he said. “There’s always something happening.”

At times in his career when he had opportunities to move somewhere bigger, he refused. He didn’t want to have his career parcelled out and split up, giving up fertility or only doing fertility.

“You can’t be the everything,” he said. Thorn liked to do it all.

The “all” may include exams, fertility, delivery and surgery, but it also includes one to two general physicals a day, Thorn said. In a day, there are also spots for his OB patients, spots for patients who come in with specific problems and spots for infertility patients.

Growing up, Thorn said he spent a lot of time with his aunt at the dance studio. She was a professional dancer. He grew up around women.

Thorn and his wife came to Albert Lea as a second thought. Their move was supposed to be to Eau Claire, Wisconsin — they were set to go there, Thorn said, when they were preparing to move from California. But Margie Thorn grew up and has family in the area, and before the move, one of those family members asked if they had thought about moving to Albert Lea, Stephen Thorn said. He was asked to help design the Baby Place. They changed their plans. 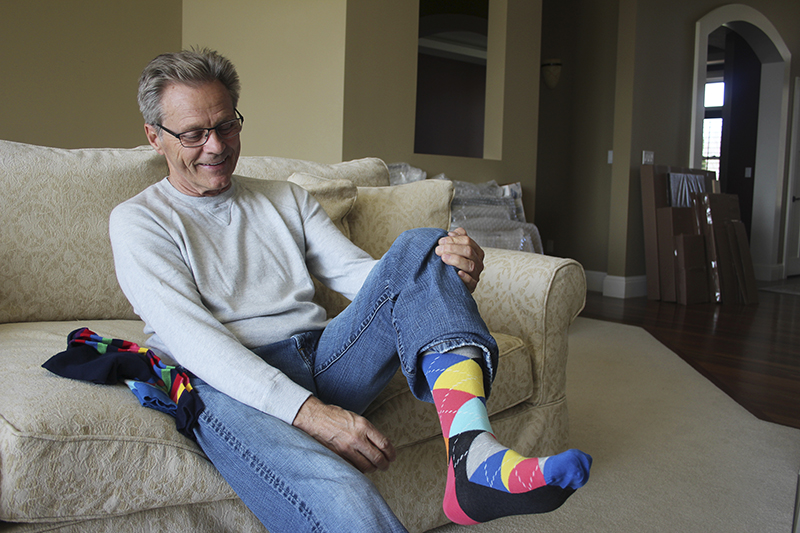 Dr. Stephen Thorn estimated he has 200 pairs of funky socks, which he has a reputation for wearing to work. – Sarah Kocher/Albert Lea Tribune

Twenty-two years later, Thorn has now delivered the babies of babies he has delivered, in the last five years more than ever, he said. He said it’s one way he knows he has been around for a little while.

“I’ll never forget those words,’” he said of a patient who sprung this information on him. “‘Oh, by the way, Dr. Thorn, you delivered me.’”

In Albert Lea, he also did his fair share of twins and a number of triplets. He remembers delivering between three and five sets of twins in one day. Every year he went to the Freeborn County Fair, he ran into a set of quadruplets for which he performed infertility treatments.

Several of these duplicates are the product of Thorn’s fertility work. It’s a process he describes using the alphabet: “You have to go A, B, C, D,” he said. There’s an order.

He starts with the basics: lab tests. If the tests don’t come back normal, one step may be a hormone, like Progesterone, which prompts the uterus to prepare for pregnancy. If those are normal, the male partner undergoes a semen analysis. Next, he’ll check the Fallopian tubes or for other anatomical complications.

He said his step-by-step approach has paid off. But it’s not a perfect science. He doesn’t always know why.

Often, there is a baby. Thorn said he and his teams have been lucky to have a lot of success. But sometimes, there is not.

“You have these people, nothing’s wrong,” he said. “What is the deal?”

But several times, Thorn said, a couple has taken a breather from infertility treatments and become pregnant on their own.

Michele and Mike Beyer fit somewhere into this fertility timeline. Michele Beyer went to see Thorn after moving back to Albert Lea to get married. She started to see him as her regular physician until the couple wanted to start their family.

“It just was not going how it was supposed to be going,” Beyer said.

In 1997, she started her infertility treatments. She was an endometriosis patient, she said.

“A lot of people who have that don’t end up with babies,” she said.

“You just kept moving forward because he truly instilled in you that there was a very, very good chance that someday, it would be you,” she said.

Meanwhile, she was watching her siblings and friends and clients have babies. Fellow patients were having babies.

“The rest of the world keeps having babies while you’re sitting up on the third floor wondering, ‘why am I not having a baby?’” she said.

Beyer said her infertility treatments ran “the whole gamut” and ended with two unsuccessful in vitro tries.Through the process, Thorn brought a peace of mind into the room with him, she said.

“It’s a journey that you can take that can put strain on everything, and it’s a journey where you have absolutely no control,” Beyer said.

After IVF, she had to sit back to let her system recover. And, somehow, in the waiting, came Emma Beyer in 2002. Her son, Matthew Beyer, was a bonus, she said. He was born in 2004.

She called Thorn a “Godsend.”

“I think to sum him up is that glass-half-full philosophy,” Michele Beyer said.

Her last appointment with Thorn was on Monday. It has been 21 years.

“You don’t spend that many years with somebody and they don’t end up to be a pretty, you know, (big) part of your journey,” she said.

‘No one more deserving’

Thorn said he has enjoyed the infertility treatment piece of his job.

And although he has had decades in the field, he is still being surprised by his job.

“If only I could say I’ve seen everything, but every once in a while, something comes along,” he said.

But after 40 years, he has seen a lot. He has a lot of experience to share, so he wants to stay in it — through teaching, maybe. But first, he said, he’s taking a breather.

And he’s cutting down on his sock collection, too; the drawer is tough to close sometimes, he said.

It’s not the only thing he has pared down before the move. He divvied out and passed along his collection of over 45,000 baseball cards (he’s a little embarrassed about it). His coin collection from a while back is also gone.

“I get these crazy, transient things,” he said.

He has held onto a few things. The basketball Larry Bird gave him has stayed, as has his framed and signed photograph of the Los Angeles Dodgers given to him by a patient who knew his interest in the team. Thorn almost played professional baseball himself.

Now, he plays golf. He hikes. He has quite a few marathons (13, to be exact) under his belt, but not in his future.

In his future is a move to central Phoenix.

“We’ve just loved the people here, but it’s time to go the next step,” he said. The friends he and his wife have made will be the hardest thing to leave behind.

But there’s one thing Thorn is hoping stays here.

“I just hope that what I’ve done for people has assisted them for their life,” he said. He has enjoyed having his own health, and the health of his children. He wants that for his patients.

They want the same for him.

“I hope his family helps him have just the best retirement ever because there’s no one more deserving,” Beyer said. “We all get to take care of our gifts.”

It’s time for Thorn, she said, to have some more time with his.