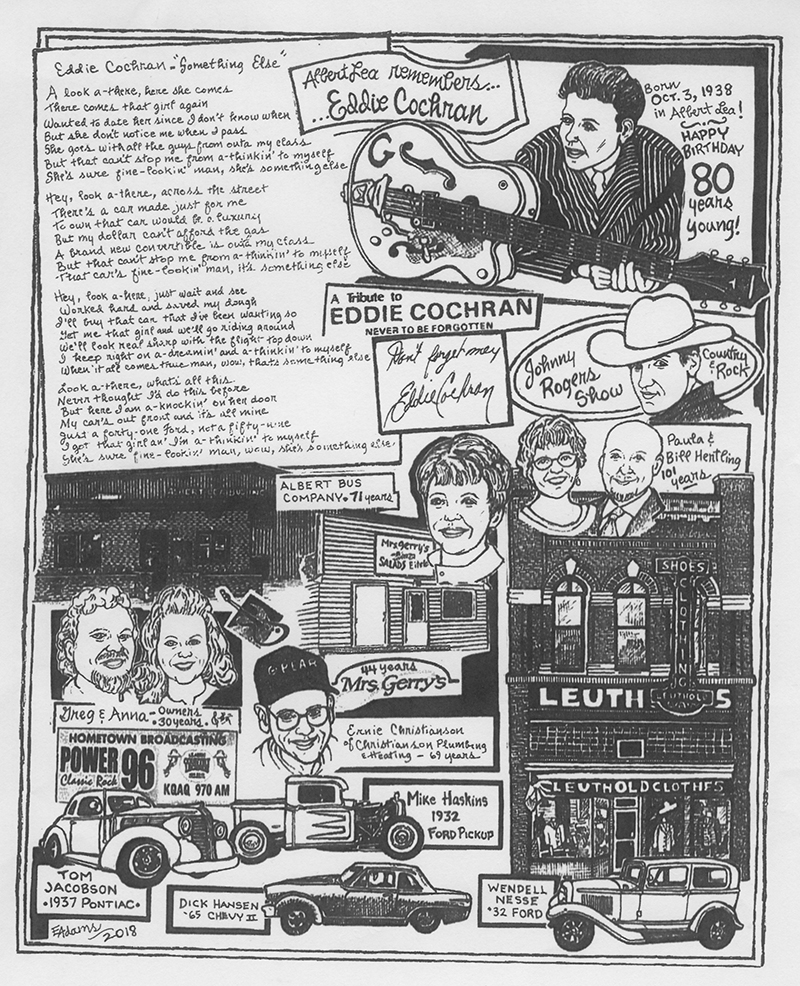 The print shows Eddie Cochran with his Gretsch guitar. He was born Oct. 3, 1938, at Naeve Hospital. If he were still alive, he would be celebrating his 80th birthday. Cochran started playing the guitar at 12 years old. In 1955, Cochran’s family moved to Bell Gardens, California.

Shown also this year are the lyrics to one of his songs, “Something Else.”

Johnny Rogers is seen to the right. He is the third cousin of Elvis Presley. He performed Friday in downtown Albert Lea.

Below Rogers is Paula and Bill Hentling of Leutholds Clothing Store, which was originally at 112 Broadway. Their business has been part of Albert Lea for 101 years.

Left is Albert Lea Bus Co., a part of the community for 71 years.

Center is Mrs. Gerry’s beside her first location. Her company is celebrating 44 years in business.

The classic car show is a valued part of Eddie Cochran Weekend. There are four cars depicted on the print that will be at the show: Tom Jacobson with his 1937 Pontiac, Dick Hansen with his 1965 Chevy II, Mike Haskins with his 1932 Ford pickup and Wende Nesse and his 1932 Ford.

The prints can be seen at Adam’s Originals on Broadway. The prints are numbered and signed by the artist. A limited number are also hand-painted. The original drawing has been donated to the Freeborn County Museum and can viewed there.

Cochran was a part of the era that moved and shaped rock ’n’ roll. He started a tour of England with Gene Vincent in January 1960. After three months of touring, he was ready to head home to celebrate Easter with his family. That Easter Sunday, he died after his taxi cab crashed on the way to Heathrow Airport.