50 years as a barber with no plans to stop 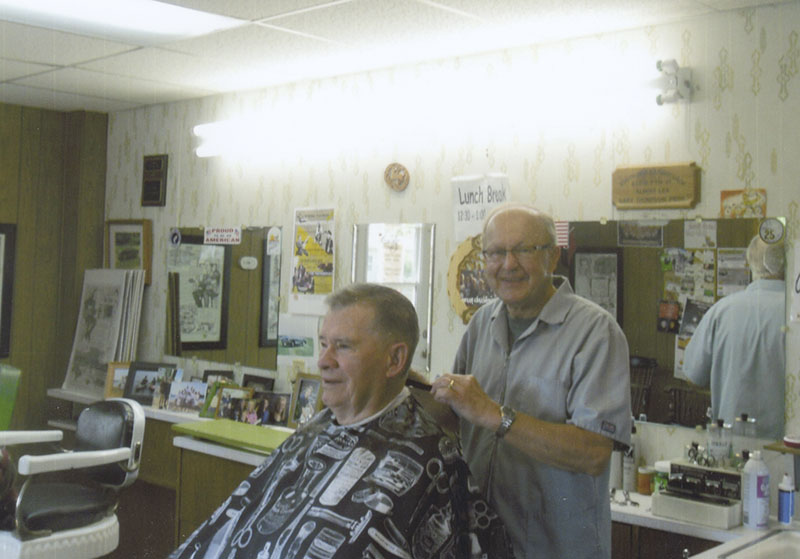 Gary Thompson is celebrating his 50th year in business as South Side Barber Shop. Jerome Meyer/For the Tribune

The profession of barbering is one of the oldest in the world. Historical studies indicate some crude forms of facial and hair adornment were practiced for thousand of years. There are in existence relics of combs, cosmetics and razors made from copper and bronze, plus written records dating back 6,000 years ago.

History also records that centuries ago, barbers performed blood-letting, pulled teeth, administered herbs and other forms of medication. Thus, they were also known as barber-surgeons. However, as time went on and modernization evolved, the barber-surgeons separated into their own individual professions as new laws were passed to protect the customer —  a change for which we can all be grateful.

The modern red and white barber post in front of most barber shops evolved its look centuries ago when the barber-surgeons hung their blood-stained bandages up to dry outside their shops.  As time went on, the stained bandages became recognized as an emblem of the barber-surgeon’s profession. Later the emblem was replaced with a wooden post with red and white stripes — which now is the universal symbol of a barber shop.

One of the three modern barber shops in Albert Lea is the South Side Barber Shop owned by Gary Thompson.  What makes this year special is that Thompson is celebrating his 50th year in business and uniquely has been at the same location since he started barbering.

“I was influenced by my uncle, who was a barber, to take up that profession,” Thompson said.

Though he grew up on a local area farm, he wasn’t interested in pursuing the vocation of farming. Thus, he then attended the Brooks Barber School in St. Paul and obtained his barber license in 1968.

As far as changes over the last 50 years, Thompson’s barber shop has had some upgrades on his barber chairs and cabinets. Otherwise, it hasn’t had much change, according to Thompson.

When asked about changes in hair styles over the years, he said, “The men’s hair styles have changed very little — maybe from short hair to long hair and back to short hair.” A customer can also get a beard trimming and a shampoo at the shop.

Per Thompson, the “traditional barber shop talk” really hasn’t changed much over the past years, which has ranged from family stories, the weather, community items, city issues and local sports.

“However, we try to stay away from politics,” he said.

“Probably one of the best enjoyments over the past (50) years of being in business is the many friendships that have been established with his customers,” he said.

When asked about retirement, Thompson indicated he has no retirement plans and he still enjoys coming to work and meeting his customers.

The summer barber shop hours are 8 a.m. to 4 p.m. on Tuesday and Thursday and 8 a.m. to noon on Wednesday and Friday.