An Albert Lea man who allegedly robbed someone last October made his first appearance on the charge Friday in Freeborn County District Court. 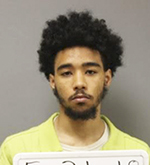 Quindell Lashawn Jefferson, 19, is charged with first-degree aggravated robbery and third-degree assault. He was arrested on a warrant pertaining to the charge Friday.

Court documents state Jefferson was charged after an Albert Lea police officer was dispatched to an Albert Lea gas station the night of Oct. 23 regarding an assault. Upon arriving, the officer reportedly noticed the alleged victim was bleeding from his mouth and holding ice to the left side of his face. His teeth and jaw were broken, and he had difficulty breathing.

The alleged victim reported he was at a nearby house when the suspects did not allow him to leave and Jefferson punched him in the side of the face. Court documents state he attempted to leave the house and the three suspects continued beating him before he escaped.

The alleged victim was taken to the hospital.

Another suspect reportedly denied knowing about the assault but was arrested on an Olmsted County warrant.

Anderson allegedly strangled him during the incident.

The suspects allegedly took $50 from the alleged victim.

Judge Steven Schwab set conditional bail for Jefferson at $20,000, contingent on him submitting to random testing, not using or possessing firearms or dangerous weapons and following other requirements.

Jefferson’s next appearance is scheduled for June 14.

A juvenile pleaded guilty to aggravated robbery in January in connection with the case and was placed on probation. If he violates probation, he would be eligible to be sentenced as an adult.