An Albert Lea man who allegedly threatened another person at gunpoint Saturday was charged with three felonies Monday in Freeborn County District Court. 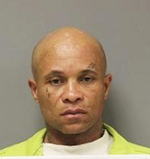 Court documents state Sanders was charged after officers spoke with the alleged victim, who said Sanders assaulted him. Sanders allegedly became angry after the person told him he could not use his phone, swore at him when he asked what Sanders was going to do with the hammer in his back pocket, and pulled out a gun, putting it in the alleged victim’s mouth, which knocked a tooth out.

Sanders allegedly threatened to shoot the victim multiple times and took a necklace and $150 from him.

Officers reportedly noticed the alleged victim had a broken tooth.

When Sanders was arrested and taken to Freeborn County jail, he allegedly had $193 in cash in his pocket.