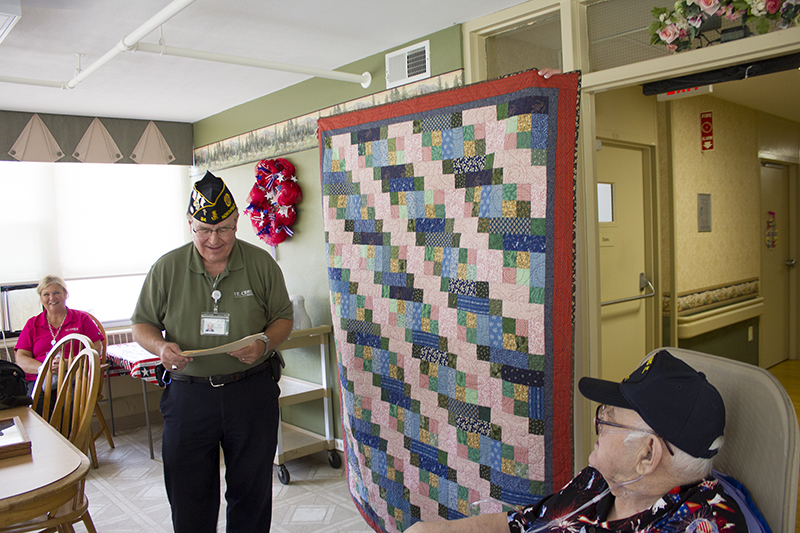 A Quilt of Valor is presented to Arthur Christiansen on Thursday. - Sam Wilmes/Albert Lea Tribune

A local World War II veteran was honored Thursday for his service.

Arthur Christiansen was given a Quilt of Honor at St. John’s Lutheran Community.

Christiansen, 97, an Army veteran, participated in the Battle of the Bulge, the last major German offensive during the war. He also helped liberate three concentration camps.

He was awarded sharpshooter and marksmanship awards and the Good Conduct Medal in 1943.

A member of the 11th Armor Division, Christiansen served under Gen. George Patton. He has been a member of Freeborn American Legion for more than 70 years.

The presentation of the quilt included a performance of “America the Beautiful” and “God Bless America.”

A Freeborn native, Christiansen graduated from Freeborn High School and attended Milwaukee School of Engineering before he enlisted. He was sent to Fort Snelling and places in the United States before he was sent to Europe, eventually winding up in Germany.

“His crack was, ‘The natives weren’t friendly,’” said his daughter, Betty Sime. 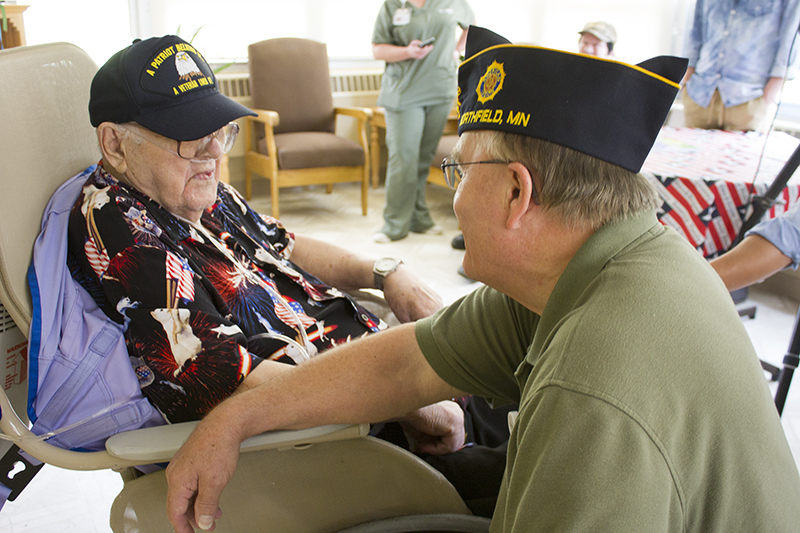 She remembered her father telling her he could smell the carnage at the concentration camps before arriving. Christiansen told his daughters of the dead bodies he found stacked on top of each other.

“He wouldn’t speak at all for over 50 years,” said his daughter, Lynda Crofton, of her father’s ordeal in helping liberate the concentration camps.

The victims of the concentration camps were only able to eat broths and juices immediately after they were liberated due to the starvation they had faced.

A picture of Christiansen is at the U.S. Holocaust Memorial in Washington, D.C.

“If you’d say hell, it would probably be the closest to it that you would want to get,” he said.

After returning to the United States, Christiansen farmed and worked for the Freeborn County Highway Department until he retired in 1984. He was Freeborn assistant fire chief for more than 25 years.

Christiansen’s daughters were pleased he was given the Blanket of Honor.

“I’m thrilled out of my socks,” Crofton said. She was informed of the honor by a friend whose 94-year-old father also received the Quilt of Valor.

The mission of Quilts of Honor is reportedly to show thanks, solace and remembrance to veterans.