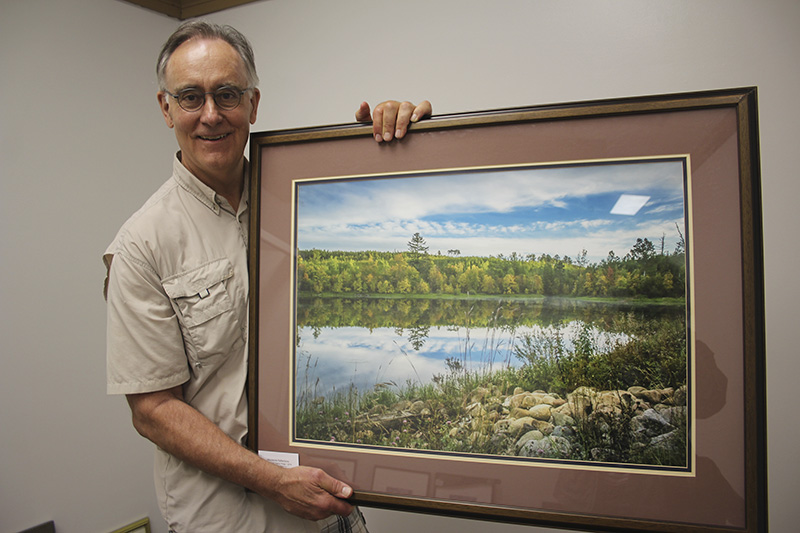 Tim Rietz of Austin will be displaying 57 photos, including this one of a bike path further north, at the Albert Lea Art Center starting July 11. - Sarah Kocher/Albert Lea Tribune

Although the photos on display at the Albert Lea Art Center next weekend come from a creator who lives just down the road, many have been taken anywhere but here.

Tim Rietz, a retired physician who lives in Austin, will display 57 photos as part of his “Share the Light” photo exhibition at Albert Lea Art Center, which runs from July 1 to August 11.

Many of them hang in the smaller forward gallery in the Art Center, in a space, due to the location of a large portion of the photos, has been dubbed “the Africa room.”

Some of Rietz’s photos are a little closer to home, though; in the back gallery, there is also a Minnesota room. One features the U.S. Bank stadium on a sunny day with the cityscape superimposed on the towering glass panes via reflection.

“‘Let’s stop the car,’” Rietz remembered telling his wife before he took it. “‘I have a feeling I’m going to see a great reflection here.’”

Rietz said he has been taking photos from a young age, growing up using the family Kodak movie camera and a Brownie box camera — but only for special occasions. He bought his first SLR camera in medical school from his roommate — a Miranda Sensorex — in 1971.

“I couldn’t afford much film, but remember how much clearer and more fascinating the world appeared through the lens,” Rietz wrote in his artist’s statement.

This is Rietz’s second show, coming right after from his first in Austin. In the show, he said he hopes to capture the power of story.

“My many years of caring for the health of others impressed upon me the importance of stories to teach, inspire and learn,” Rietz said. It also expresses an appreciation for the arts and creativity in general; Rietz is a cellist with the Austin Symphony Orchestra. Art, he said, helps us share.

Albert Lea Art Center gallery manager Tom Mullen said he brought Rietz’s show in after seeing it in Austin and being impressed with the photographer’s eye and the variety within the show.

“He can find an image that just brings it back to life,” Mullen said.

For the show and in his current shooting, Rietz said a decent amount of his focus is on travel and nature. When he is out jogging, biking or skiing, he has a camera with him, even if it is just his phone.

“When you see the whole thing he has, it’s almost like looking at a National Geographic,” Mullen said: the color is good, and the shots are sharp.

Rietz said he is inspired to capture a moment when he is impressed with what he sees — “‘Hey, this would be beautiful in a frame,’” he said.

Through the show, Rietz said he is hoping to stimulate conversation, encourage a sense of community and create awareness.

“It’s a beautiful world if you can give it a chance,” Rietz said.