Funeral services for Bonita M. Kral will be at 10:30 a.m. Thursday at St. Theodore Catholic Church in Albert Lea. The Rev. Kurt Farrell will officiate. Visitation will be from 6 to 8 p.m. Wednesday at the Bonnerup Funeral chapel in Albert Lea. Interment will take place at Bohemian National Cemetery in rural Myrtle. 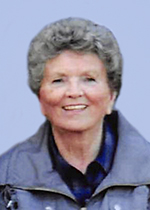 Bonita passed away peacefully Thursday, June 21, 2018, at Muse Norris Hospice House of Mason City. She was 78.

Bonita Mary (Gill) was born Sept. 27, 1939, in Mason City to Steven and Vera (Fent) Gill. She grew up in Kensett, where she was active in many sports and activities. She graduated from Kensett High School as salutatorian. Bonita continued her education at Naeve Hospital in Albert Lea where she obtained her radiology technician certificate. She eventually became chief X-ray technician and head of the hospital’s school, where she taught many students.

On Dec. 29, 1962, Bonita was united in marriage to Roger Kral in Albert Lea. The couple was blessed with two children, Tim and Colleen. Together they would raise their family on a farm near Myrtle.

Bonita enjoyed many things. She enjoyed watching sports, and always had beautiful flowers and decorations around the family farm. She can be described as somebody who made you better just by being around her. Above anything else, she enjoyed spending time with her immediate and extended family. Bonita was most happy at her children’s and grandchildren’s events. Even though her family lived far away, she always seemed to be there for them. She rarely ever missed any event, and was certain to send a card to all of her grandchildren on any special occasions. Family meant the world to Bonita.

She was preceded in death by both parents, Steven and Vera Gill; mother and father in-law Joseph (Mollie) Kral; her siblings Gary (Arlene) Gill, Patricia Fandel and Rosalie Olson; and a brother-in-law, Donald Kral.