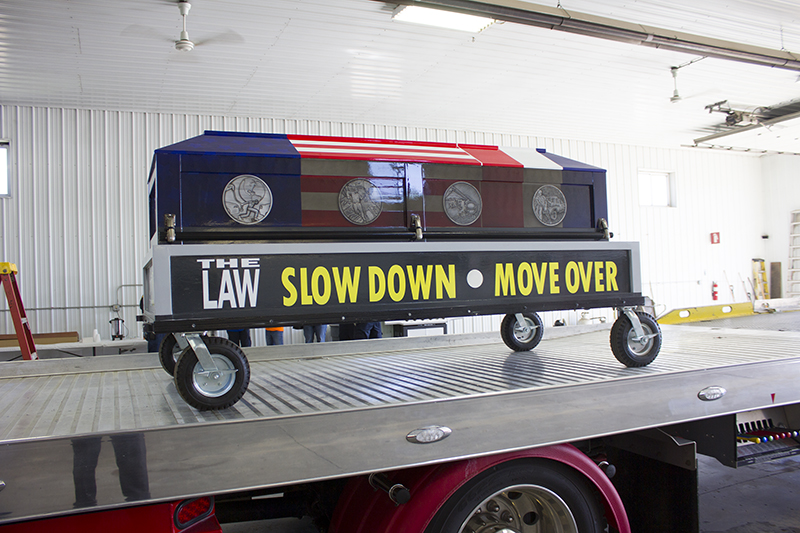 A casket signifies the casualties first responders and tow truck drivers face on a daily basis due to motorists not moving over on roads across the United States. - Sam Wilmes/Albert Lea Tribune

A national campaign looking to eliminate first responder and towing professionals from being struck by motorists stopped in Albert Lea Wednesday.

The Spirit Ride campaign is led by Mike and Ilce Corbin. Mike Corbin, a singer/songwriter who has written songs about the towing industry and has sung at towing shows, said the campaign is expected to stop in all continental 48 states by November.

Corbin built a coffin for the exhibit to show the possibly fatal mistake motorists make when they do not move over for first responders and towers.

He suffered extensive injuries after he was struck by a vehicle while helping a motorist on the side of a road, including a shattered hip, knee, back, tibia and fibula.

Corbin said the event is important because it honors “first responders who have fallen,” adding it is also meant to make motorists aware that they have to move over when first responders and towers are working on the side of the road.

“It’s a shame that not many people do that,” he said.

Based in New York, the pair visited 120 cities in more than 25 states in 2017, the first year of the campaign.

Tow truck driver and Schmit Towing General Manager Joe Buck said he feels afraid when he works on the side of interstate roads.

“People don’t move over,” he said.

Buck was struck by a vehicle while he was working on the side of the road in Colorado. He has since had seven knee surgeries and three knee replacement operations.

“You’ve seen the TV show ‘Deadliest Catch,’” he said. “No. Tow trucking is the deadliest job in the world, because people don’t move over. They are too busy preoccupied with their day-to-day routine.”

Buck said motorists do not realize first responders and towers are helping the public. He advocated for stricter enforcement of a law passed in honor of Minnesota State Patrol trooper Ted Foss, who was struck and killed on the side of Interstate 90.

The law requires drivers to keep over one full lane away from stopped emergency vehicles with flashing lights activated.

Failing to abide by the law can result in fines exceeding $100.

“Judges need to know what’s going on so that they can stiffen the penalty or give them a penalty,” Buck said.

He recalled the death of the manager of a Wisconsin-based towing company after being struck by a vehicle, noting his belief in the selfless nature of tow truckers and the industry’s status as professional.

“We want to be able to go home to our families at night and not have to wonder if the guy coming down the (street) drunk and is going to steer into us,” Buck said.

“Most people do not know that there were more tow truck drivers killed on American roadways in the U.S. annual than there are any other police officers, fire or any other incidents out there.”

Klatt said he empathizes with tow truck drivers because of the dangers they face on a daily basis.

Albert Lea Police Department Sgt. Tim Harves said there is a lack of awareness of the move-over law because it is newer, noting he sees motorists drive by while eating, putting makeup on, reading newspapers and participating in other activities.

Mike Corbin said the chances of the tour taking place next year are based on finances.