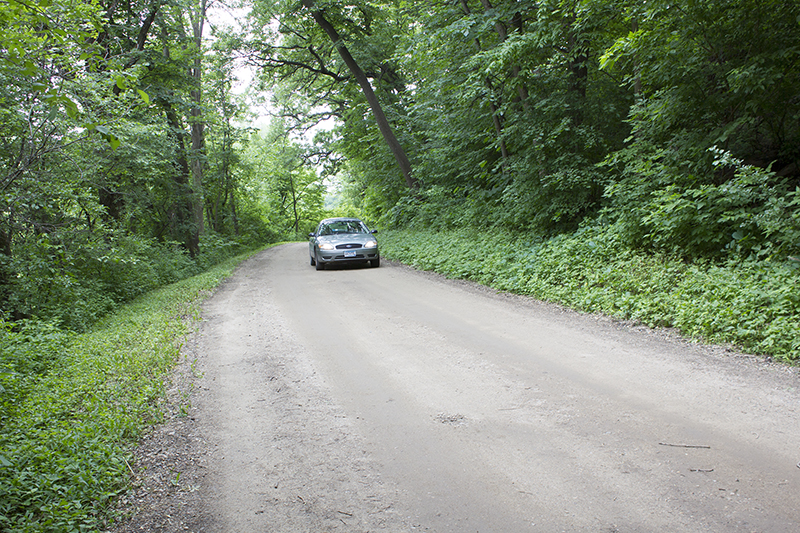 A few residents of the neighborhood near Lakeshore Drive expressed concern about the safety of the road for pedestrians on Monday during an Albert Lea City Council meeting.

The residents described a portion of Lakeshore Drive as a dirt alley with sharp turns, making it difficult for motorists to see pedestrians.

“Every single one of them are at the mercy of motor vehicles, most often exceeding cautious speed,” said local resident Lee Wiese during a public forum.

She said along with the introduction of the Blue Zones project in 2010 came an increase in the amount of pedestrians walking in the area.

“It’s all good,” Wiese said. “It really is, except for one thing: The increased recreational pedestrian traffic on that piece of dirt pathway that cars also use means an increased risk of yet another tragedy, a very preventable tragedy.”

Wiese proposed the city put up barriers to protect pedestrians from speeding motorists on the road. She said recreational pedestrians would be able to go around the barriers, and it would alert motorists that the road is not available for through traffic.

“We have to change with the times,” she said. “We have to be proactive in providing safety for all. We can no longer afford to be reactionary and only act after a tragedy has occurred.”

“Please do something to ensure the safety of those who are out and about and actively embracing the very lifestyle we are promoting as uniquely ours.”

Rollie Keyeski, who spoke on behalf of his family, said they have used the walking path for about 25 years, and though he appreciates the improvements the city has made, he noted he has nearly gotten hit by a vehicle near the lake and is leery about the traffic, which he said “goes very fast” around Lakeshore Drive.

“Most of us are there for pleasure and the aesthetics, but for some, the pleasure is speeding around the lake,” he said.

Keyeski noted he is not sure if speed bumps would successfully address the issue.

“Hopefully we can address that issue,” he said.

Local resident Dirk Seeger recalled when a car traveled down Lakeshore Drive too quickly while the driver was using his cellphone one day when Seeger was walking down his steps toward the lake with his two children.

Terri Stadheim said she has discussed the issue with city officials for nearly 20 years and has received positive responses. She said people who originally opposed placing walking paths near Lakeview Cemetery now use the path.

“I understand that people don’t like change, but this will really be for the betterment of Albert Lea,” she said.

Stadheim suggested the city implement a non-locking gate and a small sign telling motorists the road is not a thoroughfare.

Council action was not taken on the request.

Albert Lea Mayor Vern Rasmussen Jr. said the issue has been looked at before.

“There (has) been action,” he said. “It just wasn’t the action that you necessarily might have thought would have been good.”

Rasmussen said the council might need to look at taking additional action on the issue and allow comments from people with different opinions.

Mark Stadheim suggested the council send police to the Lakeshore Drive neighborhood so they can see how quickly cars move through the area.