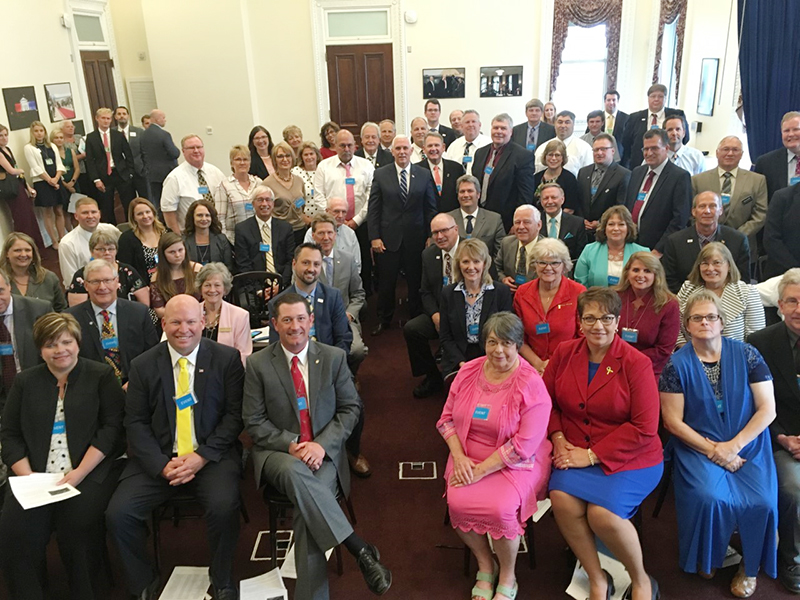 Freeborn County District 4 Commissioner Chris Shoff traveled to Washington, D.C., to attend a private briefing and tour at the White House on May 31, according to a press release. - Provided

Nearly 70 county commissioners, officials, staff and guests traveled to Washington, D.C., to attend a private briefing and tour at the White House on May 31, according to a press release. Among them was Freeborn County District 4 Commissioner Chris Shoff.

The White House Office of Intergovernmental Affairs has organized similar events for county officials in each state to visit the White House and attend a personalized briefing from federal officials, including Vice President Mike Pence, who spoke to the Minnesota group about the importance of the partnership between local and federal government officials, as well as how local elected officials are always on call when he stopped into the meeting.

Before the picture, Pence slapped Shoff on the shoulder and told him to continue to sit down as he was too tall while sitting down already, according to the release.

“This was a wonderful opportunity to establish relationships with various members of the administration as we navigate the federal programs that are vital to Freeborn County and to hear about new programs that can help our area,” Shoff said in the release.

Other speakers at the White House briefing included:

The group also attended a briefing at the National Association of Counties headquarters while in Washington, D.C., where they heard updates on important issues facing counties, including mental health resources for county jails and pending legislation to address the opioid epidemic.

“As one of three Minnesota commissioners elected to serve on the NACo Board of Directors, this was a unique opportunity for us to connect with our federal association, hear about our federal priorities and a time where we were able to ask questions about issues that are specific to Minnesota and our county,” Shoff said.

Shoff served as AMC president in 2015, the only Freeborn County commissioner ever to serve in that capacity, according to the release. AMC has been serving Minnesota’s 87 counties since 1909. AMC is a voluntary statewide organization that assists the state’s 87 counties in providing effective county governance to the people of Minnesota. The association works closely with the legislative and administrative branches of government in seeing that legislation and policies favorable to counties are enacted. In addition, the association provides educational programs, training, research and communications for county officials.