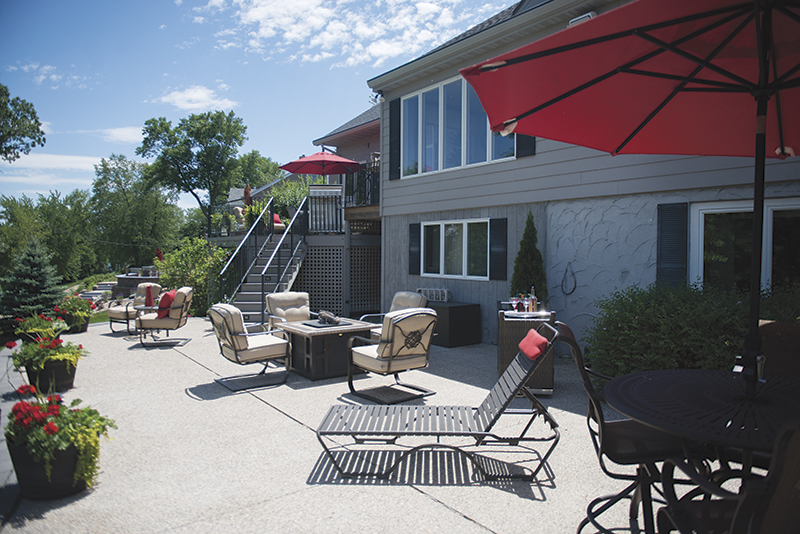 The Rasmussons have an expansive backyard with multiple tiers and seating options. - Colleen Harrison/Albert Lea Tribune

House offers everything you’d need for a perfect get-together

Whether indoors or outdoors, Dean and Jessie Rasmusson’s home on North Lane was updated with entertaining in mind. 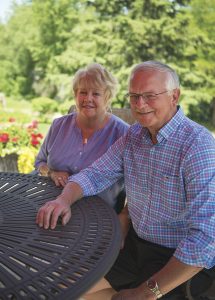 With features such as a spacious kitchen with island seating and the million-dollar view from their back deck and patio, the home has an inviting feel from the minute you step through the front door.

The Rasmussons, who have been married for 49 years, have owned their home on North Lane for 19 years, after living on Oakwood Drive for 17 years.

Dean Rasmusson started and owned Dras Cases in Lake Mills for 23 years, and Jessie Rasmusson worked for Edward Jones for 20 years with the company. They are both now retired.

They couple said the home, which was built in 1950, has gone through multiple renovations to make it their own since they bought it. At one point a few years ago, they even considered moving and building a new home; however, because there are few lake lots available, they decided remodeling was a better option for them. 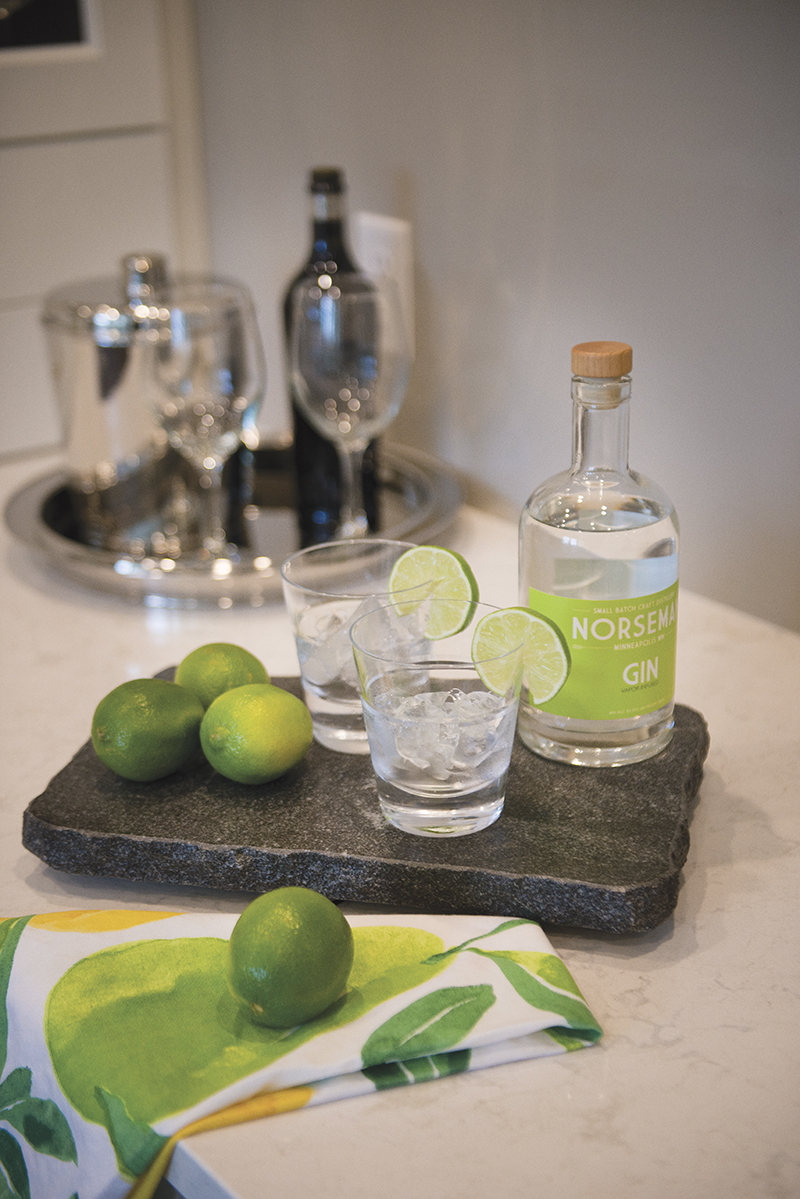 The 4,000-square-foot structure used to be walled off for each room but has since been opened up on the main level to create an open-concept feel with a kitchen, dining room and living room flowing from one room to the next. The couple renovated their kitchen last November for a second time since they’ve owned the house.

“Every room has been remodeled,” Jessie Rasmusson said of how the house looks today compared to when they bought it.

They said they designed the space, along with the help of their daughter, Amy Petersen. Jessie Rasmusson said they walked around and tried to picture where they would like the different parts of the kitchen to be and then designed based on their vision. 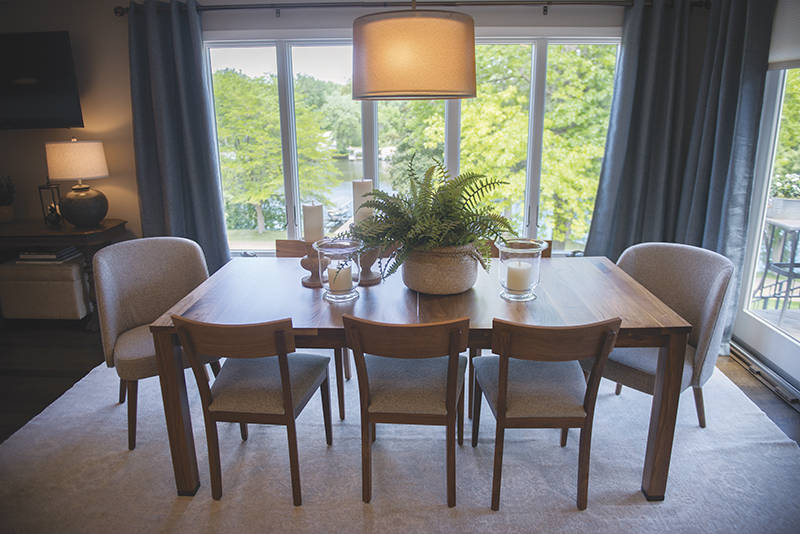 Windows along the back part of the house showcase the view of Fountain Lake. – Colleen Harrison/Albert Lea Tribune

Jessie Rasmusson called the kitchen one of the most important rooms in the house, as this is where everyone usually flocks when they have guests over.

“You do all the entertaining in the kitchen, you don’t even really need the other rooms,” she said with a laugh. 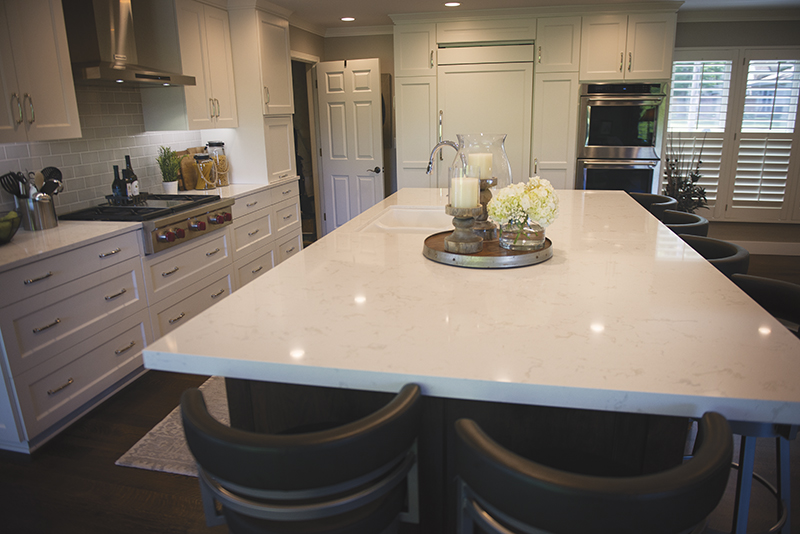 Jessie Rasmusson said people usually congregate around the kitchen, so the Rasmussons made sure there was plenty of space added when they remodeled theirs. – Colleen Harrison/Albert Lea Tribune

The kitchen includes a large island with Cambria countertops perfect for entertaining, along with a double oven and warming drawer and separate bar area with a beverage drawer, to name a few of the features. The kitchen also includes fresh, white cabinets and abundant storage.

The main level is connected by white oak hardwood floors throughout, and the windows along the back of the house offer a generous view of Fountain Lake, with plentiful natural light making the entire house feel bright and alive. 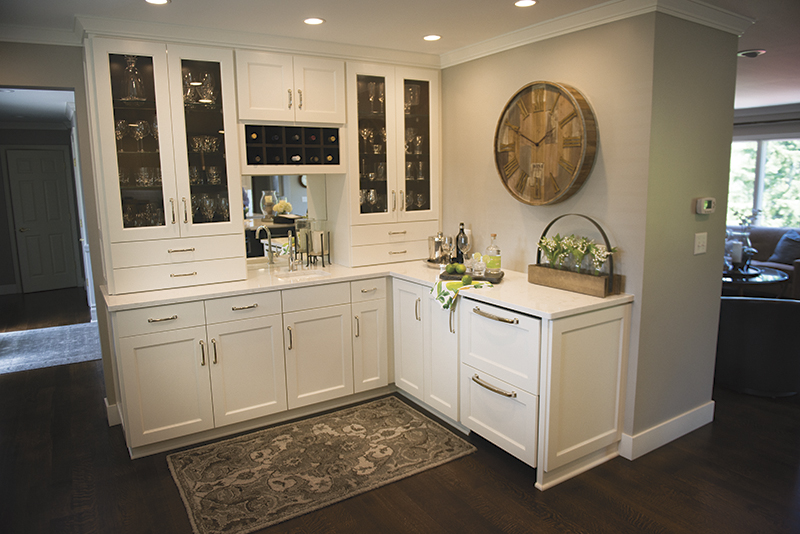 The Rasmussons took out a dining room near the front entrance of their house while remodeling in order to expand their kitchen. – Colleen Harrison/Albert Lea Tribune

Off of the kitchen is a porch area, which has been updated to accommodate year-round use, and which Jessie Rasmusson said is one of her favorite places in the whole house and where she can sit, relax and enjoy a cup of coffee.

Outside the porch area, off the back of the house, is a deck and large patio area that provide the perfect setting for a summer party or get-together. 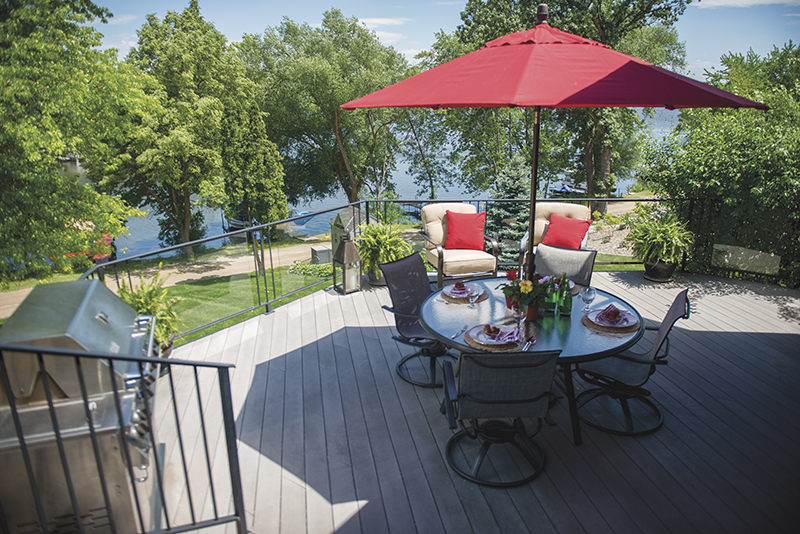 The couple’s deck overlooking Fountain Lake gets plenty of use during the warmer months. – Colleen Harrison/Albert Lea Tribune

She said they had a speaker system installed both inside and outside to play music, and there are numerous seating areas with umbrellas, a grill and even a bar area.

Performance Landscaping updated the landscaping, and Dean Rasmusson also had a system installed to water the array of ferns and red geraniums there. 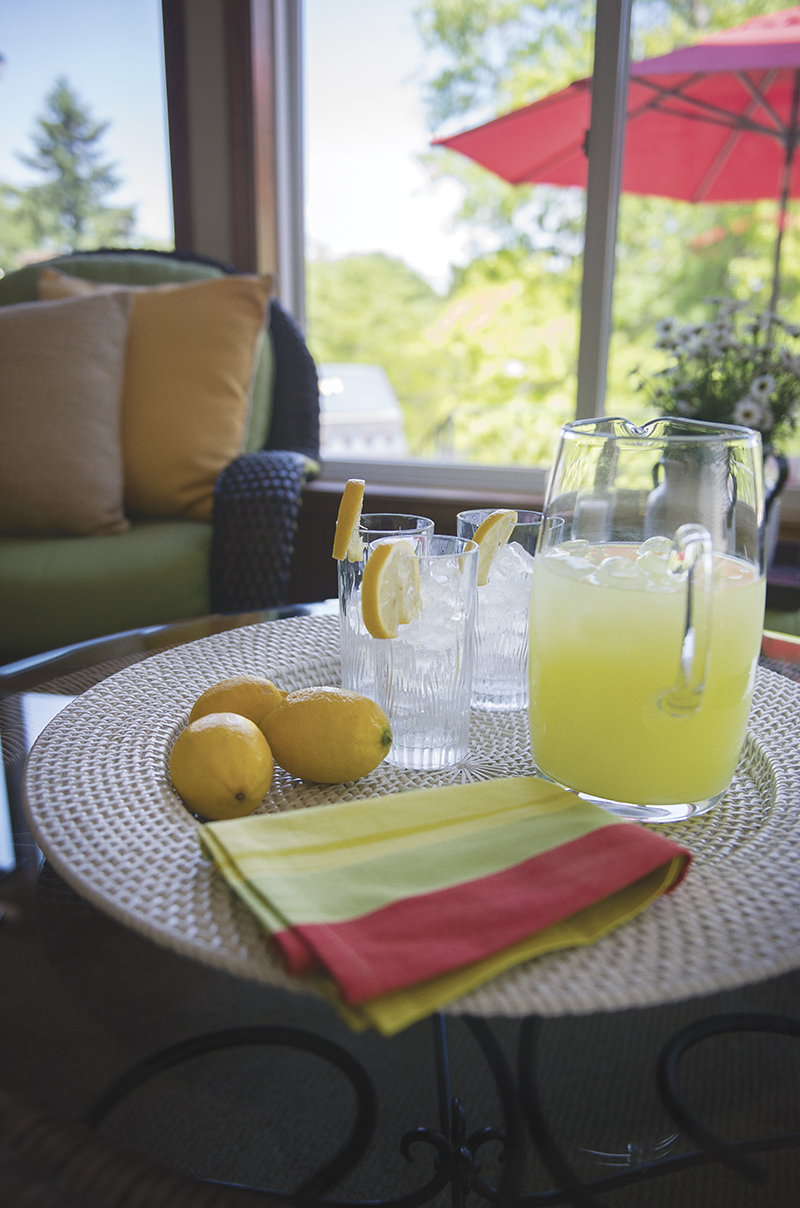 The couple said they have been lucky to be able to use some of Dean Rasmusson’s experience at Dras Cases and incorporate his cabinetry into their home. He played a large role in many of the early remodeling projects.

Though much has changed since they first moved in, some features remain the same — only updated. 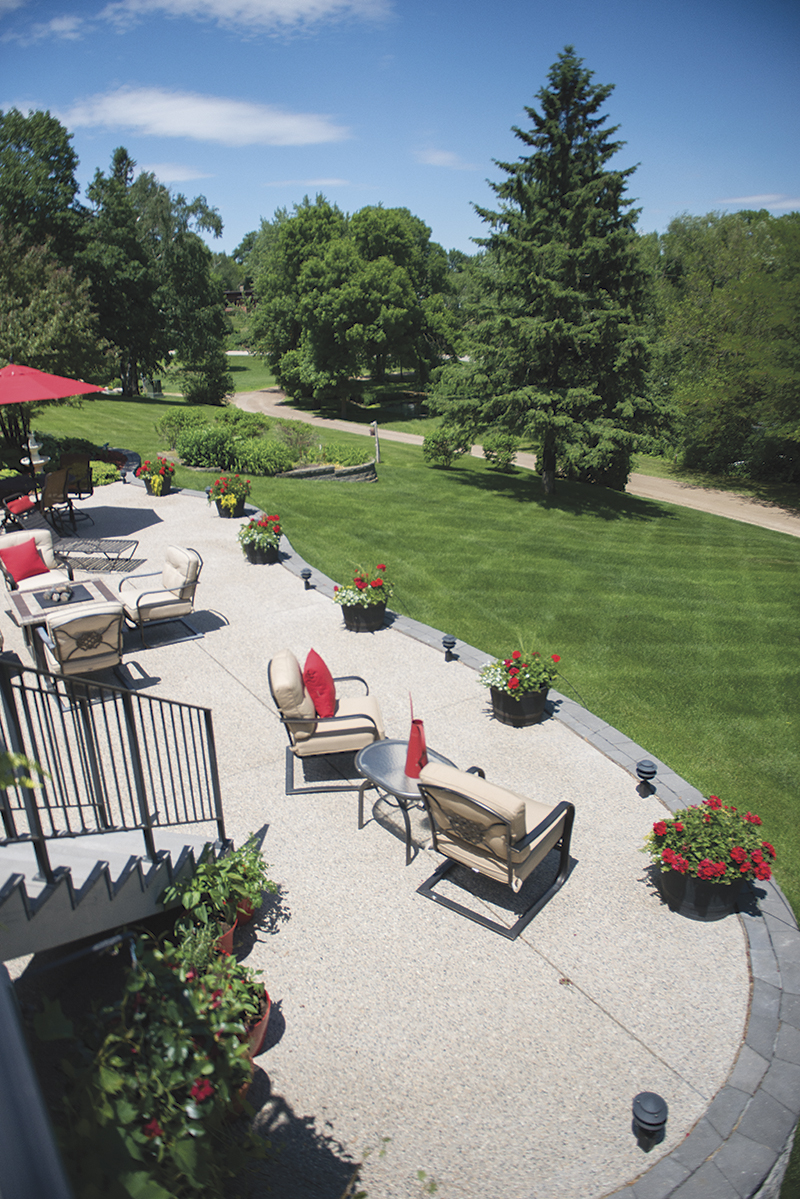 The Rasmussons have an expansive backyard with multiple tiers and seating options. – Colleen Harrison/Albert Lea Tribune

When you walk in the Rasmussons’ front door, there is wainscoting on a wall that came from an old church. They contemplated whether to take it out — it used to be black — but instead decided to freshen it up with white paint.

The Rasmussons have another home in Anthem, Arizona, where they spend a lot of time during the winters, along with several of their other friends from the area. They also have a cabin on Cedar Lake in Rice County. 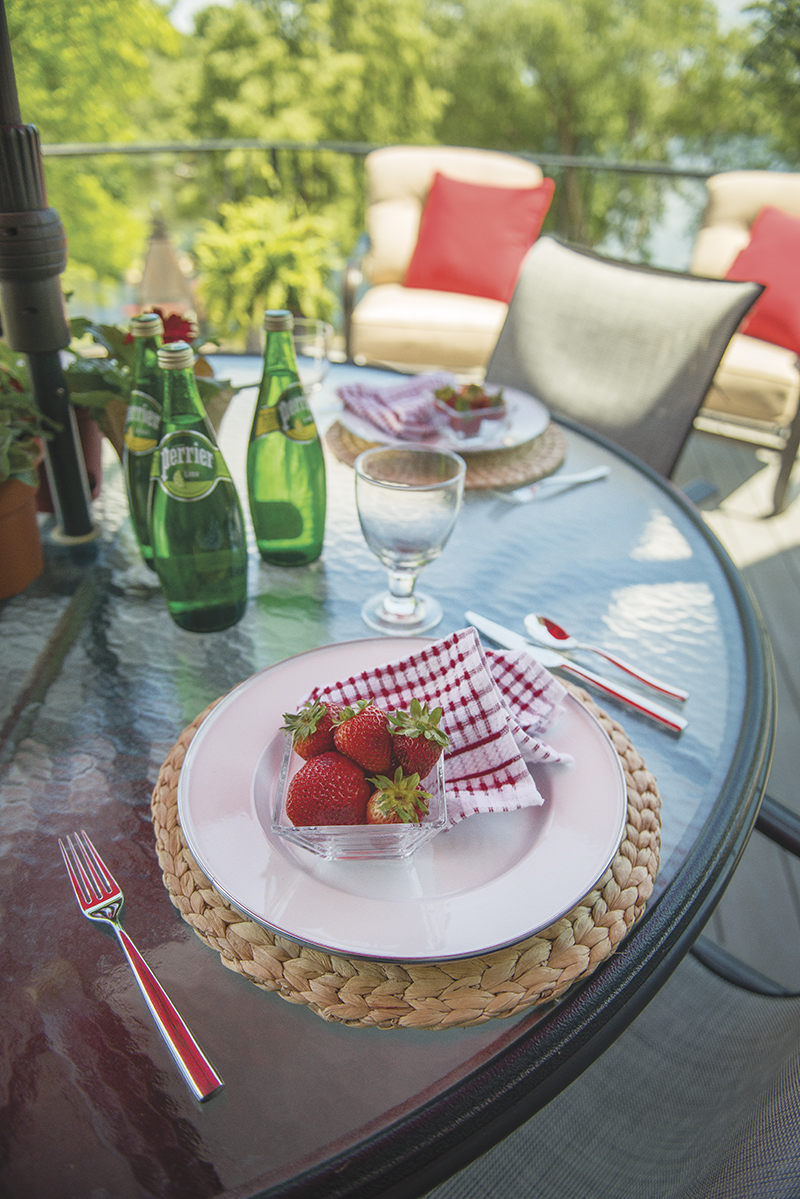 Dean Rasmusson said he and his wife enjoy attending car shows and usually take part in a Corvette trip each summer.

They love that they can see their daughter’s home across the lake.