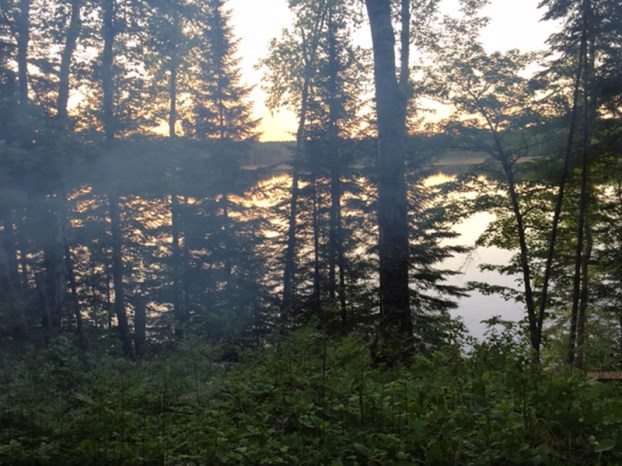 An evening sunset on Boggy Lake is shown here with a little wisp of campfire smoke floating into the picture. - Provided

Dick Herfindahl: Enjoying a Minnesota summer up at the cabin

This week I am happy to be writing my column sitting at the picnic table on the deck at our cabin in northern Minnesota. I am up here with my wife Jean, both of my sons and most of the grandkids. This is a special week as we have not spent a week together at the cabin in quite some time.

We have been spending a lot of time mowing, cleaning up a few brush piles and fallen trees, generally getting the place looking spiffy. After working, we spent time in the evening enjoying the campfire while my son Brad and my grandson Grant entertained us by playing guitar. We have even managed to get in a little fishing in our spare time and we also made a visit to the “Lost 40” which is a forest that was saved from lumbering many years ago and now has trees that are 300-400 years old. It is well worth the visit.

While we were at the cabin, some of the more adventurous members of our family decided to go kayaking and canoeing on one of the many beautiful rivers that abound in this area of our great state.

One of the highlights of the week was when Brad took the two granddaughters fishing. The first evening fishing from shore, Emma caught a bass and her sister, Ava, caught her first fish, which was a dandy bass. Not only did they both catch fish, but they loved it and they now want to go whenever they can get their dad to take them out in the boat. Getting him to do that is not a problem because his chest swells up with pride whenever one of those girls catches a fish.

One evening we visited one of our favorite little lakes not far from our cabin and Emma caught her first northern. This has definitely been a week of firsts for our two granddaughters and I know it makes grandpa proud to see them enjoying the outdoors experience. 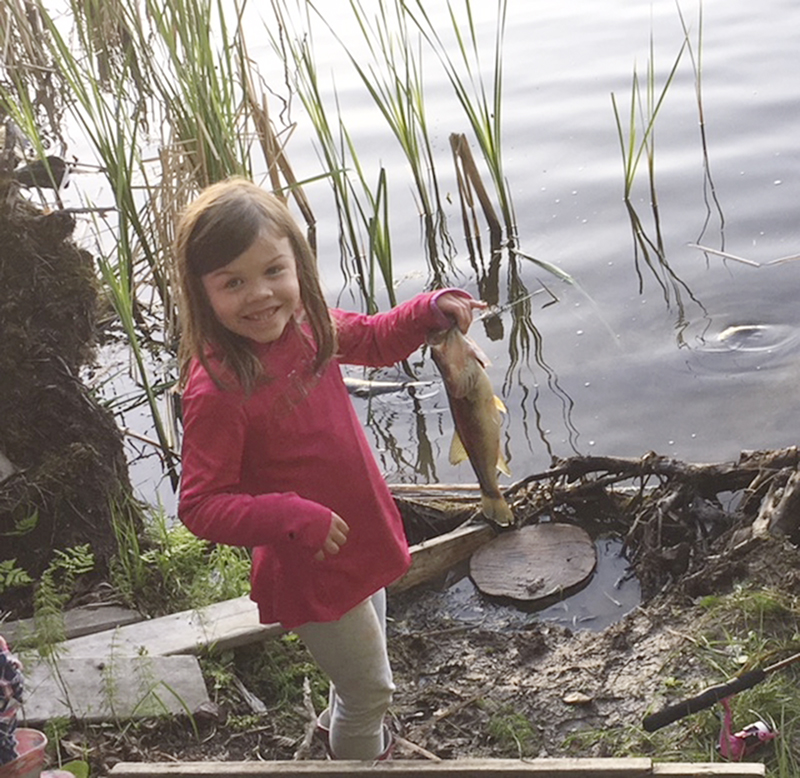 Dick Herfindahl’s granddaughter, Ava, is shown with her first fish, which was a bass caught on the lake by their cabin. – Provided

I mentioned the campfire earlier and I have to say, having family there to enjoy it with is very special. It seems that no matter how windy it is during the day at the cabin, the wind always seems to die down in the evening, which makes gathering around a campfire and looking out on this beautiful little lake very special.

Our little lake was not supposed to have any fish in it when we bought the land, but over the last fifteen years it has given us a lot of enjoyment. Although the species may change from year to year, we have always caught fish. Perch were the dominant species when we first bought it and all of a sudden they disappeared and big crappies and bluegills flourished in the lake for a few years. It froze out a few years ago and only a year later we were catching bass, perch and sunfish. Where these adult fish came from are a mystery because the DNR does not stock this lake as it is classified as an E-1 lake, which means it is an environmental lake and everything happens naturally.

This past week, we have spotted eagles cruising the shoreline in front of the cabin along with osprey and our feeders have hosted humming birds, purple finches and woodpeckers. My trail cameras have captured some deer, a few racoons, a fox, which is a frequent visitor, and a pine marten that has been visiting us almost every night. That pine marten is brave enough to have been captured on the trail camera snooping around on our deck while we were sleeping and it was also spotted in a tree not far from the cabin in the daylight. Another night we had a visit from some coyotes that awoke us with their yelping. One was also captured on the trail cam. Gotta love those trail cameras! The only visitor we haven’t had this year is that black bear that was hanging around the cabin last year.

Spending time at our cabin in the north woods is always special, but when you spend it with family it is even more so.

Until next time, it seems like the hot weather has also gotten the fishing to “heat up” on area lakes. It’s a good time to get out and take advantage of good fishing. Summer is the time to make great memories.

Dick Herfindahl: Looking forward to a nice week at the cabin

Woods & Water by Dick Herfindahl   As the old saying goes, “if you can’t stand the heat, get out... read more