Dick Herfindahl: Looking forward to a nice week at the cabin 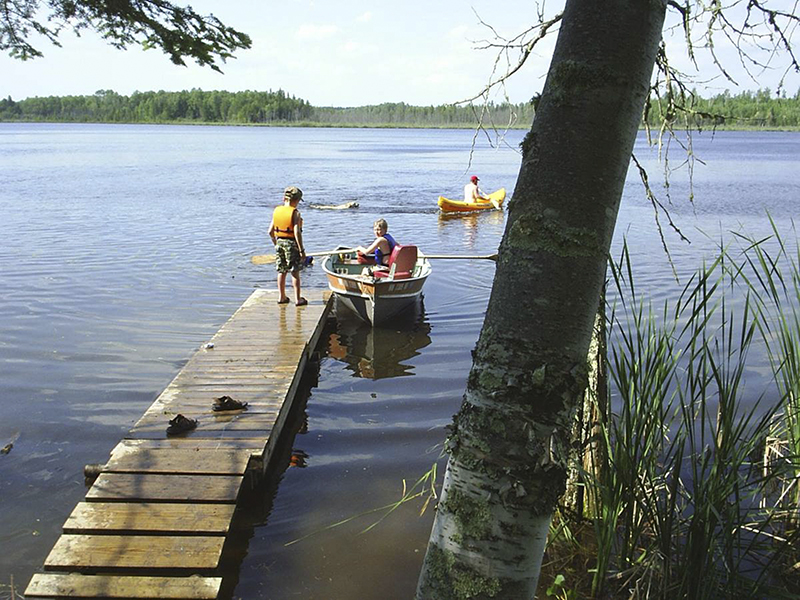 This photo, taken at Boggy Lake in June 2005, shows two of Dick Herfindahl’s grandsons in the foreground while his son, Brad, paddles the kayak while being followed by his dog, Bud. - Provided

As the old saying goes, “if you can’t stand the heat, get out of the kitchen” and in a way, I am doing just that. I will be heading up north to the cabin as this column goes to press.

I am especially looking forward to it this time, as it is probably as close as we will get to an all family vacation. My son, Brian, and my daughter-in-law, Kim, and two of their boys are going. My youngest son, Brad, and his two girls, Emma and Ava are also going. I know Grandma will be busy fussing over them. The rest of the crew all had to work.

We are planning on doing some work on the place while we are there, although we’ll definitely make some time to do some fishing. I know that a week can go by fast, hopefully not too fast.

Whenever I think back to the years when the grandsons were younger and able to be there with us, it makes me feel good. Although the cabin is still pretty rustic, the boys seemed oblivious to the fact and just enjoyed being there. There are times when I am alone at the cabin and if I close my eyes I can almost hear the laughter of the kids as they came running up the hill holding their fish to show to grandpa.

Their grandma had won an inflatable kayak in some contest and the boys just loved it. Trevor, the oldest, was the self-proclaimed skipper of it and he spent most of his time fishing out of it. When Trevor had some non-fishing time, which was not much, the other boys took their turn. We had a small fishing boat and a paddle boat down by the lake so there was always a way to get out on the lake.

As evening would set in, the boys would take the boat out and go swimming. We had bought some environmentally friendly soap and they used that to take baths in the clean lake. Nightfall was campfire time and fish cleaning time. Trevor and the other boys would always fish until dark. We had a couple gas lanterns to use for light while cleaning the fish. We had a cleaning table behind the outhouse and the boys eventually got pretty good at cleaning fish and feeding the mosquitoes.

Taylor, my second oldest grandson, was the campfire guy. There were times when he would wake up in the morning and before grandma was finished making breakfast he’d ask if he could light a campfire. He was very careful, so I would usually let him do it, as long as the fire conditions were low.

I really love going to the cabin in the fall and I really enjoyed the times when myself and Brian and the three boys would go up during MEA break. In October the weather can be pretty crisp and there were times when we had snow on the ground but that’s when the old wood stove came in mighty handy. That stove keeps the cabin nice and cozy and this time of year was when we usually had a campfire going all day long.

The boys were there to hunt, so they along with their dad, would start each day by taking the boat across the lake to their blinds and wait for the birds. I would make coffee right away and then I’d stay behind in that warm, cozy cabin and get everything ready for breakfast. When I heard shots I know that they had probably gotten one or two birds so I would start breakfast because I knew they would be in shortly.

During the day was when they would do some grouse hunting, in most years there always seem to be a few around. The boys have always been waterfowl hunters, but they do hunt pheasant in the southern part of the state and do some grouse hunting while at the cabin in the fall. There were times when we did manage to do a little fishing at that time, but their focus was mainly on birds.

I have to say that I am really proud of my grandsons for being avid sportsmen and loving the outdoors. I never did hunt waterfowl so my contribution to their outdoors experiences was fishing. I’ve taken them fishing since they were little and in some ways, I may have spoiled them a bit by teaching them to fish like I like to do. I have always liked to troll and cast for northern and bass and I love fishing for crappie. I am not saying that I don’t try to seek out the wily walleye, because I do, but I have never had the patience to do a lot of vertical jigging. Drifting with a Lindy Rig or a jig has always been my favorite way to fish walleye, but that’s a story for another time.

When it comes to northern fishing, along with the temperatures, it has definitely heated up. There have been some nice fish caught on area lakes. I have also heard of some descent walleye being caught on Fountain Lake.

Until next time, It seems like the hot weather has also gotten the fishing to “heat up” on area lakes. It’s a good time to get out and take advantage of good fishing. Summer is the time to make great memories.