He was born June 13, 1919, to Joseph and Julia Jacobson in Madison. He graduated from Madison High School and studied at St. Olaf College, the University of Minnesota and MacPhail School of Music. 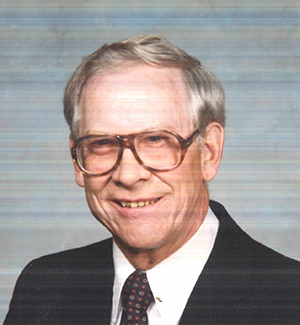 Don was united in marriage to Clarice A. Graff of Madison on Nov. 15, 1942, in Minneapolis.  Claire and Don celebrated their 75th wedding anniversary with family in 2017.  Their joint business, Jacobson Music Co., was established in 1949 and operated for decades in Albert Lea.

Don enjoyed his retirement years in Hayward and was active as a pianist, piano tuner, lecturer and entertainer.  He recently received a gold medal from the Veterans Administration for his piano performance. Well into his 90s he traveled to retirement homes in the Hayward area to, as he said,  “Play for the old folks.”

His other interests included politics, scouting, volunteering and travel — a highlight was a 1974 trip to Norway with Claire. Don organized a coffee club for his Hayward buddies that met weekly and continued during his last months in a nursing home.

He was preceded in death by his parents Joseph and Julia Jacobson; sisters Ethel Lembke, Ruth Estrem and Peggy Whelan; and brothers the Rev. Woodrow Jacobson, Harold Jacobson and Paul Jacobson.

There will be an interment service for family with military honors at the Veterans Memorial Cemetery in Spooner, Wisconsin.