Funeral services for Donna Eileen Petersen of Albert Lea will be at 2 p.m. today at the Bonnerup Funeral Service chapel in Albert Lea. The Rev. Ryan Quigley will officiate. Visitation will be one hour prior to the service at the funeral home. Interment will be in Hillcrest Cemetery. 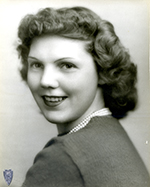 She first married Lloyd E. Chaplin and had two children, Judy Kay and Terry LeRoy. She married Kenneth “Kenny” Petersen in 1953 and together they made their home in Albert Lea. Before retiring they owned and operated Ferguson Co., a small advertising firm.

Kenny passed away in 2005 and Donna spent the last 13 years in Wayzata.