Funeral services for Donovan B. Hauge will be at 11 a.m. Tuesday at Our Saviors Lutheran Church in Albert Lea. The Rev. Michael Lilienthal will officiate. Visitation will be from 4 to 7 p.m. Monday at Bonnerup Funeral Service in Albert Lea and again one hour prior to the service at the church. Military honors will be accorded by the Kiester veterans honor squad. 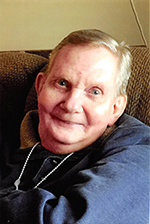 Donovan was born April 25, 1937, to parents Benjamin and Minnie (Walle) Hauge in Winnebego County, Iowa. He grew up on the farm south of Kiester and later moved to Albert Lea with his family.

Donovan graduated from Albert Lea High School and went on to proudly serve his country in the U.S. Army for three years.

After returning home, Donovan held several jobs, including construction on the Green Lea Golf Course with his father, working in the parts department at Sime Equipment in Kiester and working as a custodian at Naeve Hospital. While working at the hospital he met his future wife, Camilla Songstad. The couple married June 16, 1963, at Scarville Evangelical Lutheran Church in Iowa. They were members at Our Saviors Lutheran in Albert Lea, as well.

Donovan was self-employed for many years and owned an upholstery and shoe repair store in Kiester. He enjoyed that work and was skilled at button tufting and reconstructing the interior upholstery of classic cars. He also owned and operated the TV store in Kiester until it closed. Donovan was a member of the Kiester Civic and Commerce organization. In his later years, he was a custodian at United South Central in Wells until retirement in 1999.

In his free time, Donovan enjoyed fishing, bowling, traveling and playing cribbage. He also enjoyed having coffee with friends and spending time with his family. He was so proud of his grandkids, nieces and nephews. Donovan and Camilla loved square dancing together and wintered in Arizona for many years after retirement and until her death in 2006.

Survivors include his son, Donovan A., and his wife, Traci Hauge, of Albert Lea; grandchildren Timothy Hauge and Kylie Hauge; sister, Verna Sporing, of Mason City; brothers-in-law and sisters-in-law Dale and Mary Songstad of Northwood, Bert and Marilyn Songstad of Phoenix and Don Morse of Spokane, Washington; as well as several nieces, nephews, great-nieces and great-nephews.

The family wishes to thank the staff at Good Samaritan for their loving care of Donovan over the years.