After a pleasant day attending church in Rochester and visiting with his son and daughter in-law, Earl went to bed Sunday night and did not wake up in the morning. He died peacefully in his sleep on Monday, June 4, 2018, at his home in Albert Lea. 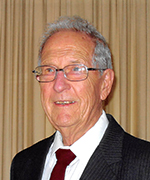 A gathering for Earl “Jake” Jacobsen will be from 10 a.m. to noon Saturday at Bonnerup Funeral Service in Albert Lea with an informal service starting at 11:30 a.m. There will be a light lunch provided following.

Earl D. Jacobsen was born Nov. 8, 1924, to Carl and Minnie (Engen) Jacobsen in Albert Lea.  Jake attended Albert Lea Area Schools, where he enjoyed playing football, hockey and track. He graduated in 1942. He furthered his education at Albert Lea Junior College as a pre-engineering major. Jake then joined the United States Army, where he actively served from 1943 until his discharge in 1946. He was an engineer in basic training, and was a part of the European Theater of Operation with the 12th Armored Division. Following his service, Jake transferred to the University of Minnesota, where he obtained his master’s degree in education in 1957.

On Aug. 31, 1948, Jake was united in marriage to Alyce “Penny” (Doyscher). The couple was blessed with two sons, Carl and Glen.

Jake loved what he did. His career started in Benton Harbor, Michigan, for one year. In 1951, the family moved back to Albert Lea, where he worked for Albert Lea High School from 1951 to 1986, teaching in the vocational department (VICA). VICA students were winners at Minnesota state competitions for 17 years, and two Albert Lea students took first place in national competitions under the direction of Jake’s teaching.

Jake was also involved in activities outside of teaching. He was a real estate salesman for a number of years. He was an avid volunteer, being a part of the food pantry, Habitat for Humanity, Salvation Army and Meals on the Go. He was also a past president of the Rotary Club, an ambassador for Courage Center for the United Way and a guardian ad litem for the Freeborn County court. Jake was also on staff at Camp Courage, a camp run by the Minnesota Society for Crippled Children and Adults from 1966 to 1972.

Jake is preceded in death by both parents, Carl and Minnie; a brother, Stanley R. Jacobsen; and a daughter in-law, Ann Jacobsen.

He is survived by his wife of 69 years, Penny; children Carl Jacobsen and Glen Jacobsen and his wife, Donna Calander; grandchildren, Ayla Jacobsen-Luna and her spouse, Jennifer Luna, and Hunter Jacobsen; as well as many extended relatives and friends.

In lieu of flowers, memorials are preferred to the Albert Lea Education Foundation or Heifer International.

Jake and Penny especially enjoyed spending time in the woods at their scenery farm near Spring Valley. Jake loved being a teacher. A special treat during retirement years was to reminisce with former students.