Funeral services for Edith Mae Jackson, 100, of Albert Lea will be at 11 a.m. Thursday at Bayview/Freeborn Funeral Home. The Rev. Jamie Cameron will officiate. Interment will be at Hillcrest Cemetery at a later date. Visitation will be one hour prior to the service at the funeral home on Thursday. Online condolences are welcome at www.bayviewfuneral.com. 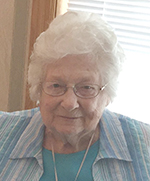 Edith died Sunday, June 3, 2018, in the presence of her family. She had resided at Oak Park Place for many years.

Edith was preceded in death by her husband, Bernard; infant daughter; son, Dick Jackson; and seven brothers and sisters.

After a pleasant day attending church in Rochester and visiting with his son and daughter in-law, Earl went to bed... read more