Evelyn Koetke, 103, of Eden Prairie, formerly of Walters, passed away Sunday, June 24, 2018, at Ridgeview Nursing Home in Le Sueur. A funeral service will take place at 2 p.m. Saturday at United Lutheran Church in Walters. The Rev. Donald Rose will officiate. Interment will be at Walters Cemetery. Visitation will be two hours prior to the service at the church Saturday. Bruss-Heitner Funeral Home in Wells is assisting the family. To leave an online condolence, visit www.brussheitner.com. 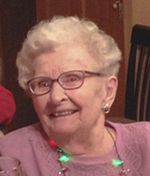 Evelyn was born Jan. 9, 1915, in Albert Lea, the daughter of George and Mary (Jacobsen) Petersen of Alden. She graduated from Alden High School in 1932 and earned her teaching degree from Mankato Teachers College. She married Kenneth Koetke of Walters on June 28, 1936.

She and her husband owned and operated Koetke’s General Store and Locker Plant in Walters until 1960. Evelyn was also a fifth-grade teacher at Kiester Elementary School in Kiester for many years.

She was active in the Walters community, United Lutheran Church and Kiester American Legion Auxiliary. She was a member of the Eastern Star and the Teachers Retirement Association. In 1987, she and Ken moved to a lake home on Mille Lacs Lake in Isle. She was a member of Faith Lutheran Church in Isle and the Isle Lioness Club. She enjoyed her lake home, the birds and wildlife, and the sunsets. Her greatest love was her family. She faithfully visited Ken during his six years in a nursing home in Onamia and she cherished her grandchildren and great-grandchildren; her sister, Ardis; and her family. She was so thankful for her “daughter,” Judy, and the love shown her by Judy’s family. Many former students stayed in touch also. Evelyn told of her early life on the farm and the many things that she had experienced over 103 years, and younger folks would listen to hear about what they could not imagine in their young lives.

Evelyn had to leave her home and move to an assisted living facility in Eden Prairie in 2011, where she spent seven years doing quite well, but recently was moved to a nursing home for more skilled care.