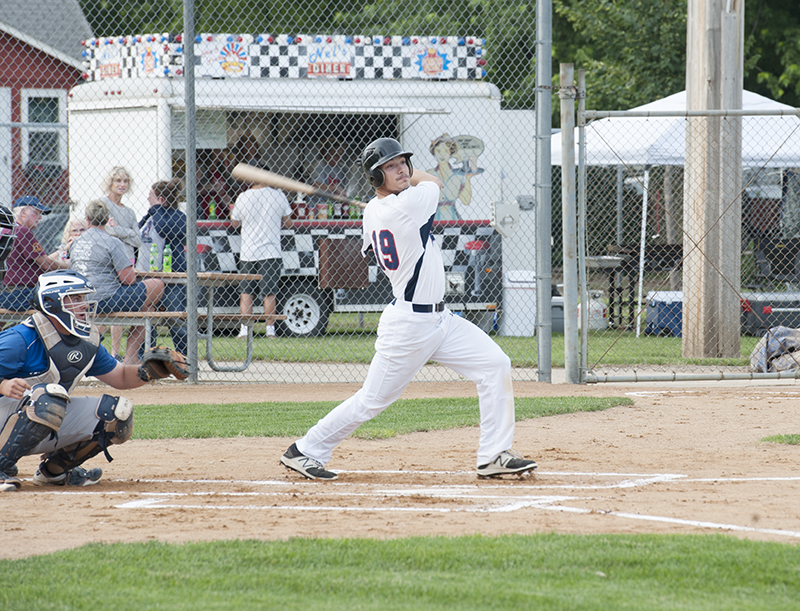 Albert Lea Laker Jack McCarthy watches as his ball towers toward right field for a double in the first inning. McCarthy went 2-4 at the plate for the Lakers in the 11-1 over Carroll. - Tyler Julson/Albert Lea Tribune

The Albert Lea Lakers entered Friday night’s game against the Carroll Merchants looking to extend the team’s winning streak to seven games and build upon their three and a half-game lead in the Pioneer League.

Despite a slow start at the plate for the Lakers, the bats to livened up later to sail past the Merchants, 11-1.

Both teams went scoreless in the first inning, with each getting one base runner into scoring position but failing to capitalize.

After a one-two-three defensive half to start the second, the Lakers scored their first run in the bottom of the inning.

Thomas Krause led off the inning with a single, but was thrown out at second after a fielder’s choice hit by Noah Hemphill. Mitchell Keeran reached on a walk, followed by an RBI double from Joey Ponder that brought Hemphill around to score.

The Merchants would answer right back in the top of the third inning, using a couple of sacrifice bunts to bring their lead-off man in for a run.

Jack McCarthy was walked in the bottom of the third, followed by a single from Josh Dudden, but the Lakers were unable to score after McCarthy was picked off. 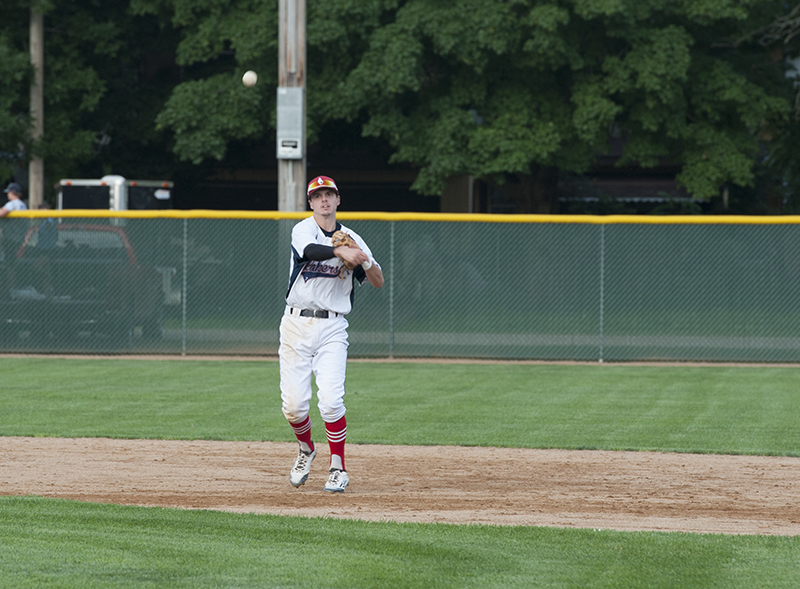 Liam Spence throws to first for the out Friday night against Carroll. Spence would tag a solo home run in the sixth inning. – Tyler Julson/Albert Lea Tribune

The Lakers were able to string together their second one-two-three inning of the game in the top of the fourth inning, thanks to a successful double play. However, they were unable to use the momentum to their advantage in the bottom half of the inning. CJ Neumann and Ponder were able to get on base, but were once again left stranded.

Dudden recorded a two-out single in the fifth inning, but was left stranded as a strikeout ended the inning.

The Lakers were finally able to break out of their offensive slump in the sixth inning. Neumann reached first on a two-out single, followed by Ponder crushing a ball over the left field fence for a two-run home run. Liam Spence followed him with a booming home run of his own, giving the Lakers a 4-1 lead with three innings left to play.

The Lakers added to their lead in the seventh inning after an RBI single from Krause made the score 5-1. A passed ball led to a sixth run for the Lakers, and Ponder hit in his fifth run of the night later in the inning with an two-RBI single.

In the eighth inning, McCarthy crushed the Lakers’ third home run of the game, bringing the score to 8-1. A sacrifice hit from Keeran and a passed ball pushed the lead to 10 runs into the ninth inning.

The lead became too much to overcome for the Merchants, as they were unable to gain any momentum in the closing innings.

Jesse Bloom recorded the save for Albert Lea, pitching the ninth inning and allowing zero runs, zero hits and striking out one.

The Lakers improve to 12-2 on the season and extend their winning streak to seven. They will be back on the diamond Sunday, when they host the Bancroft Bandits at 4 p.m.