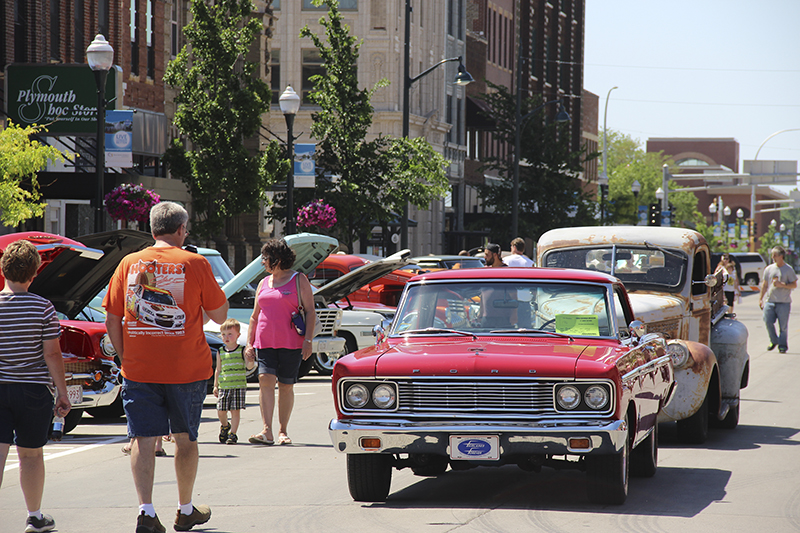 People walk up and down Broadway to check out cars at the Eddie Cochran car show Saturday. In front is a 1965 Ford Fairlane owned by Stan Opdahl. Sarah Stultz/Albert Lea Tribune

For the 32nd year, classic cars will once again grace the street they may have paced several years prior.

“It was a big deal on Friday and Saturday nights to drag Broadway,” said Eddie Cochran Weekend organizer Jerry Monson, thinking back on his high school years. On the south end, drivers would turn their cars around at the former root beer stand, which is now a former Dairy Queen, and head back toward the turnaround at the north end of Broadway Avenue, back when Fountain Street did not connect through to Bridge Avenue.

“You see buddies, you know, in their cars, and somebody might park and ride with you for a while, and vice versa,” Monson said.

This year, as in previous years, that cruise will be re-lived on a 12-mile route beginning at the Freeborn County Fairgrounds and ending downtown after a loop around a portion of the community.

But classic cars are one step removed from the purpose of the weekend, Monson said.

“The thing that a lot of us lose sight with, with Eddie Cochran is he wasn’t really a car guy, but it’s his music,” he said.

The connection between the two, Monson said, is that a large part of the “classic car” era is also the early rock ’n’ roll era — those years in the ’50s and ’60s. This is also the era many people involved with old cars came out of: This is when they were in high school or just out of high school, Monson said.

That’s where Whitesidewalls and The Johnny Rogers Show come in.

“That’s why I really, this year, wanted to have two good bands there,” Monson said. “They’ll both do Eddie Cochran songs. They both respected what he did during his music career and respected him, so it’s really about keeping Eddie Cochran’s name alive, (playing his music) and keeping the music out there.”

Eddie Cochran was a musician and performer born in Albert Lea in 1938. During his life, he made musical waves in rock ’n’ roll, rockabilly, country and rhythm and blues.

This will be Johnny Rogers’ first time performing in Albert Lea and with the festival. The Johnny Rogers show will perform country music from 5 to 6:15 p.m. Friday, take a break for car awards, then move into his rock ’n’ roll revue show starting at 7:30 p.m.

Rogers said the legends of country show will include Hank Williams Sr. through Johnny Cash and Willie Nelson and up to George Strait, and he will also perform some of his own songs. The rock ’n’ roll show is a “Buddy and beyond” experience, and will also include some Cash songs.

And, of course, there will be Cochran.

The performer said he always includes some Eddie Cochran in his rock ‘n’ roll shows.

Rogers will perform across the street from the Convention and Visitors Bureau at the corner of Clark Street and Broadway Avenue. There will be a stage facing west with sandwiches and a bar set up outside operated by 112 on Broadway. The Albert Lea American Legion will also have food outside on the sidewalk, and there will also be food vendors. There will be a similar refreshment setup Saturday for the Whitesidewalls performance in Fountain Lake Park.

“Especially with a rock ’n’ roll show, I always tell the fans to strap on their safety belts and don’t cross the yellow line until the ride has ended,” Rogers said.

Friday’s events also include a cruise-in social from 3 to 10 p.m. on Broadway Avenue downtown.

June 9, the swap meet returns after around six years of absence during Eddie Cochran Weekend. People with car parts, vintage items, records and other things from the ’50s and ’60s era will meet at North Washington Avenue and Water Street.

In the evening, the Whitesidewalls will perform from 7:30 to 10:30 p.m. in Fountain Lake Park.

June 10, the Cloverleaf Lions Pancake Breakfast runs from 8 a.m. to 12:30 p.m. at the Fairlane Building in the Freeborn County Fairgrounds. United Methodist Church will host a 10 a.m. rock ’n’ roll service, followed by a picnic and car show from 11 a.m. to 2 p.m.

Additionally, the Freeborn County Historical Museum, Library & Village will be open from 10 a.m. to 4 p.m. Friday and June 9 for reduced rates. The museum has an Eddie Cochran display with items donated from his family, and the weekend is a fundraiser for the museum, library and village.

Where: Most entertainment is downtown. The 12-mile car cruise Saturday starts at the Freeborn County Fairgrounds.

How much: Free to attend