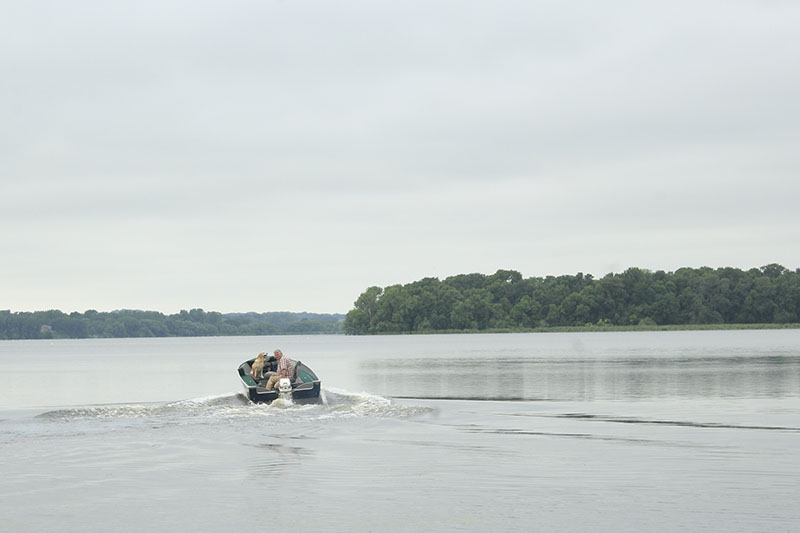 It is not the A-list, but the delist that Shell Rock River Watershed District is working toward for Pickerel Lake.

According to the Minnesota Pollution Control Agency’s 2018 proposed impaired waters list, Pickerel Lake has been listed twice: more recently, in 2016, for aquatic consumption due to mercury in fish tissue, but before that, back in 2008, it was listed for aquatic recreation due to nutrient/eutrophication biological indicators.

According to Shell Rock River Watershed District Resource Technician Courtney Christensen, that listing is something the district would like to change.

Criteria for the listing include water clarity, chlorophyll-a levels and phosphorus levels. Each has its own standard set by the MPCA for shallow lakes — like Pickerel Lake — and after 2009, each of the three values has been toeing the line in Pickerel Lake.

Pickerel Lake is part of a subwatershed named after the lake itself, and current efforts, made possible by an $825,000 Minnesota Board of Water and Soil Resources grant in 2016, are part of an overall push to address watershed concerns from the top-town, Christensen said.

“The ultimate goal from this grant source is have nutrient reductions in Pickerel Lake that are great enough to delist the lake from Minnesota state impaired waters list,” Christensen said.

The approach puts a focus on the upper watershed, including Goose, Pickerel and White lakes.

The Watershed District has four years to use the grant from when it was issued, Christensen said. Currently, it is channeling funding into three bigger projects: two wetland restorations and a streambank restoration. The purpose of all three? Drop those phosphorus values.

Projects now follow the 2009 Pickerel Lake reclamation, in which the Minnesota Department of Natural Resources conducted a fish kill using rotenone, a substance toxic to fish. The treatment and the installation of the Mud Lake fish barrier in 2008 were intended to work together to control the carp population.

According to the Shell Rock River Watershed District’s 2017 Pickerel Lake water monitoring summary, levels for each of the three listing criteria dropped significantly in 2010, pushing the lake closer to a delisting.

“We were able to capture so much nutrient reduction with that large bang-for-your-buck project, but we still weren’t quite at state standards,” Christensen said.

Using Lessard-Sams Outdoor Heritage Council funds, the Watershed District purchased 45 acres of land on which it will be restoring wetlands for one project.

These wetland help drop phosphorus levels because the vegetation growing there helps take up the nutrients and offers sediment a place to settle after heavy flow events.

“A big wetland offers a place for that soil to be deposited into the wetland bottom, and so that nutrient is then in the wetland, where it can be absorbed by that vegetation before it filters out naturally,” Christensen said.

For another restoration project, the Shell Rock River Watershed District is working with the U.S. Fish and Wildlife Service and Pheasants Forever to create 32 wetland ponds totalling 35 acres, Christensen said.

“Collaboration has been amazing,” Christensen said.

The property these 32 wetlands will be restored on is part of a 248-acre parcel owned by the south-central chapter of Pheasants Forever, but it will transition ownership to the U.S. Fish and Wildlife Service after the project is complete. Minnesota Pheasants Forever Habitat Restoration manager Alex Nelson said he anticipates a spring transfer. Nelson said Pheasants Forever purchased the land using the Clean Water, Land and Legacy Amendment and Lessard-Sams Outdoor Heritage Council funds with the intention of providing quality upland habitat and recreation activities, along with protecting and restoring native habitat.

“It just so happened that it fell into the subwatershed of the Shell Rock River Watershed District,” Nelson said, which allowed the district to use its grant money to fund the wetland restoration.

Christensen said wetland restoration will require dealing with drainage tile previously put in place to make the land tillable. To restore the property to wetlands, specifically on the Pheasants Forever property, the tiles need to be broken, making them useless on the property and allowing it to once again capture and hold water. It also involves putting in dikes and berms.

Pheasants Forever took responsibility for seeding 232 acres of the land with a mixture of native wildflower and grasses, including over 30 forb species.

“We will kind of reconstruct, as close as we can, the native prairie that was there prior to being plowed up in the 1800s,” Nelson said.

The seeding took place in the spring and the land will be mowed and managed for annual weeds. Nelson said native species usually take two to three years to fully establish.

Christensen said the goal is for both wetland restoration projects to be competed by the fall.

Phosphorus comes out of streambanks because it often binds to sediment, Christensen said, and when sediment is washed away from the streambank and into the stream, it takes phosphorous with it. The streambank restoration on the south side of Pickerel Lake intends to deal with what are now highly erodible slopes. It will provide grading stabilization for the banks and add riprap and toe wood, a structural technique that uses the root balls of trees and puts them in the stream bank to take the force of the flow, reducing erosion in stream bends and therefore keeping phosphorus out of Pickerel Lake. It would also provide fish habitat.

The district is ready to begin construction on the streambank restoration, but Christensen said they are on hold by order of the U.S. Army Corps of Engineers until after the northern long-eared bat — a threatened species — finishes its nesting season.

These are the big projects, but not necessarily the final touches on work in the Pickerel Lake subwatershed. With the remainder of the BWSR grant funds, the district plans to implement smaller projects, likely establishing rock inlets, on its way toward improving water quality.

Christensen said Pickerel Lake has to meet the MPCA’s shallow lake standards for three years to be delisted.

“More and more lakes are put on the impaired waters list every year,” she said. “Not very many are taken off.”