Funeral services for Forrest “Forrie” Claussen will be at 10 a.m. Monday at Trinity Lutheran Church in Albert Lea. The Rev. Eileen Woyen will officiate. Visitation will be from 4 to 7 p.m. Sunday at Bonnerup Funeral Service, 2210 E. Main St. in Albert Lea, and again one hour prior to the service at the church. Interment will be in Graceland Cemetery with military honors accorded by the Albert Lea area veterans organizations. 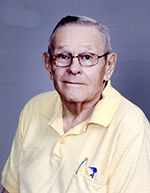 Forrest Dale “Forrie” Claussen, 87, died Thursday, May 31, 2018, at Good Samaritan Society of Albert Lea. Forrest Dale Claussen was born Jan. 20, 1931, in Pipstone, the son of Howard and Verna (Suhr) Claussen. The family lived in southwestern Minnesota near Pipestone and Jasper. He moved with the family to Moody County, South Dakota, in 1936. The family moved to Twin Lakes in 1937 and he finished grade school in District No. 76 in Twin Lakes. Forrie started working for his father in the excavation business at a very early age, around 11 years old. He was baptized at Lunder Lutheran Church in Twin Lakes in 1947.

In March 1951, he enlisted in the U.S. Army. He took basic training at Schofield Barracks in the territory of Hawaii. After basic training Forrie received orders for shipment overseas. Korea was his destination, as the Korean War was in full swing. He landed at Incheon and went ashore there. He then moved on to Seoul and was assigned to the 3rd Infantry Division. He ended up in the 39th Field Artillery Battalion of the 3rd Infantry Division. He returned to the United States in June 1952. He spent the remainder of his enlistment at several army camps in the U.S., including Camp McCoy, Wisconsin; Camp Carson, Colorado; Camp Hale, Colorado; and Fort Leonardwood, Missouri. He was discharged in March 1954 at Camp Carson.

He returned home and worked many years in the excavation business, working for some years with his father, then in business with his brother, Dell. He was self-employed for a while and also worked for Sorensen Brothers for 13 years and Peterson Excavating for five years.

He was a member of Trinity Lutheran Church and a 33-year member of the International Union of Operating Engineers. In 1983 Forrie became active in a number of veterans organizations, holding a number of offices in them. He is a life member of the following: Veterans of Foreign Wars Post 447, American Legion Post 56, Disabled American Veterans Post 166, Korean War Veterans, Arden Rowley Chapter of Apache Junction in Arizona, Society of the Third Infantry Division Post 12 and served as president of the Albert Lea Avenue of Flags. He always tried to be an advocate for veterans rights.

He is preceded in death by his parents Howard and Verna Claussen; brother, Richard Claussen; and sons John and Terry Claussen.

Memorials are preferred to the DAV, VFW and Trinity Lutheran Church.