Get your fish on 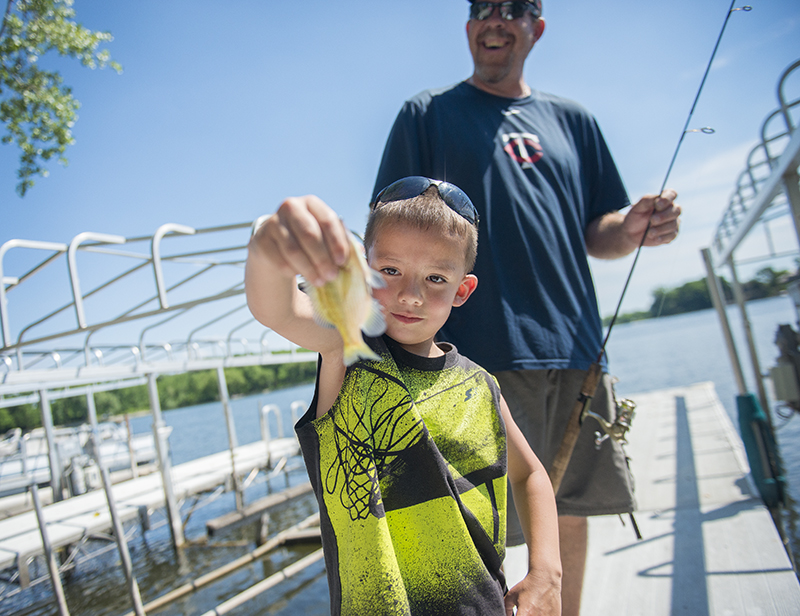 Weekend encourages area children to get out and fish

There wasn’t much left of one grandfather’s 5-pound walleye after his 12-year-old grandson tried to do him a favor by cleaning the fish for him.

“Well, I took it to the cleaning house and I about slaughtered it — butchered it,” Larry Pence said of the childhood memory. “Grandpa wasn’t too happy, but the fish tasted good.”

Pence, a lifelong fisherman and now president of the Fountain Lake Sportsmen’s Club, is continuing to be a part of those early fishing experiences by paying it forward. The Sportsmen’s Club is hosting a local event in conjunction with the Minnesota Department of Natural Resources’ annual Take A Kid Fishing weekend June 8-10. From 9 to 11 a.m. June 9 — or until it runs out — the club plans to hand out 350 free fishing poles and accompanying tackle. The club also provides bait in the form of minnows.

At Edgewater Bay on Friday, the bait of choice was worms. There, Albert Lea resident Jon Woodside pulled up sunfish with his grandson, Ayden Woodside.

Jon Woodside said he likes the opportunity fishing provides to get together and do something with his grandson.

“We both enjoy doing something that doesn’t cost much, and we can have a good time,” he said. 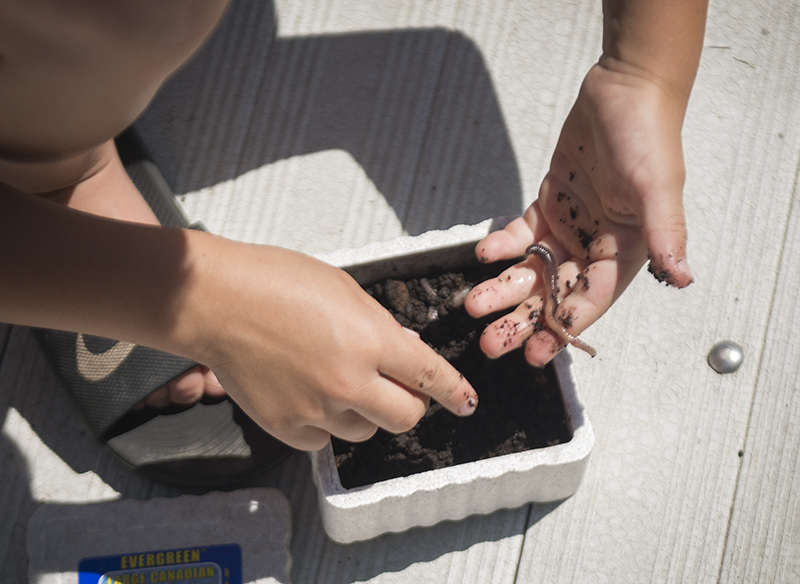 The bait of choice was worms on Friday for Ayden and Jon Woodside. – Colleen Harrison/Albert Lea Tribune

It is a sentiment MinnAqua education specialist Deb Groebner said the Take a Kid Fishing weekend taps into, too. MinnAqua is a DNR fishing education program.

“It’s not just about taking the kid fishing, but also a good excuse for the adults to get out as well,” she said.

Groebner offered some tips for starting with young fishers. She recommends:

• Be open to a short fishing trip. Kids aren’t always up for five hours on the water. Break up the trip with other activities, or just keep it to half an hour.

• Be prepared. Bring snacks, drinks, hats, bug spray, sunscreen, a first aid kit and anything else you might need.

• Make the activity about enjoying the outdoors and each other rather than catching fish. “Have fun, and (I) hope you catch a fish, but if you don’t, it’s not the end of the world,” Groebner said of the weekend.

• More tips for beginner fisherpeople are available on the DNR website: dnr.state.mn.us/takeakidfishing.

At the local event, children can pick their fishing pole. Pence said about 75 percent of the reels will be closed-face, while 25 percent will be open-face spinning reels.

“It’s fun,” Pence said. “You should see them line up down there.” 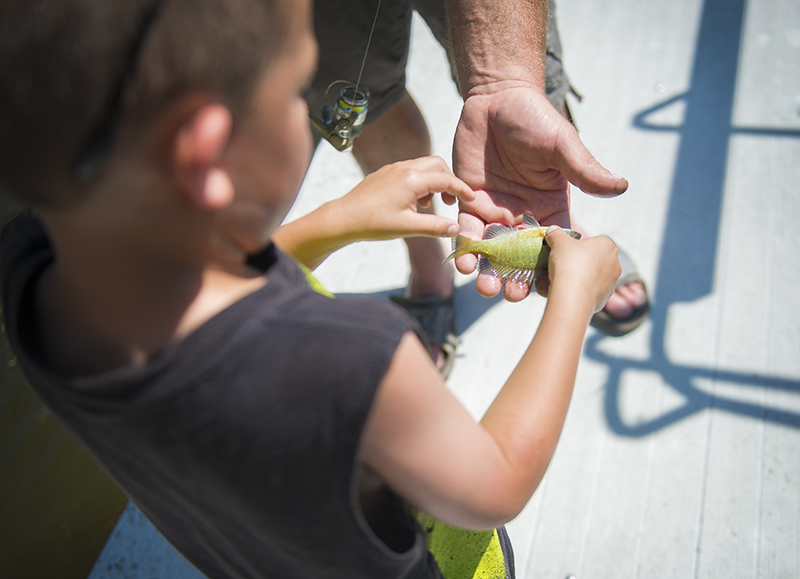 Jon Woodside unhooks a sunfish so his grandson, Ayden Woodside, can take a look at it before releasing it back into Fountain Lake on Friday. – Colleen Harrison/Albert Lea Tribune

The supplies are funded partially by Moose Lodge, partially by REG in Glenville — which will also be at the event with free bobbers — and is also funded through money the Sportsmen’s Club raises through raffle ticket sales at the Freeborn County Fair. The Albert Lea Anglers will also participate in running the event.

“If you look around Albert Lea, you know, we have the lakes here, how many kids are running around here on bicycles with fishing poles hanging off their bicycles and a minnow bucket or a net?” Pence said. “You know, and we want to get more kids involved with fishing.”

Minnesota DNR hunting and angling recruitment, retention and reactivation coordinator James Burnham said the weekend is an effort by the DNR made in hopes of encouraging people into fishing as a pastime, a hobby or a sport.

“The end goal is literally as simple as getting them hooked on going fishing and being outdoors,” Burnham said.

Because the weekend means children 15 or under and their adult counterpart 16 or older both can fish all three days without a license, Burnham said it is hard to quantify the weekend’s success. Nonetheless, that incentivization of a free weekend of fishing creates one less hold-up, either fiscally or convenience-wise.

“Part of this is to take away those barriers, perceived and real, to get those people out doing this stuff that might not otherwise do it,” Burnham said.

Additionally, Burnham said several state parks are having events associated with the weekend, and for state parks that have fishing gear to check out, equipment rental will also be free June 8-10.

“When I go out fishing, when I go out hunting, for me, the reward is being on the woods or in the water, so if I get anything, it’s just the gravy on top,” Burnham said. 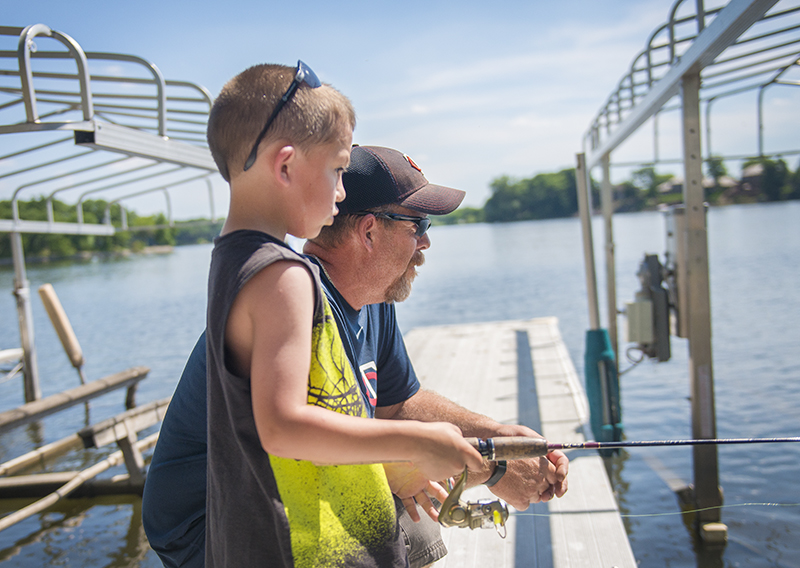 The grandfather-grandson duo regularly fishes together, and were fishing off of Edgewater Bay on Friday. – Colleen Harrison/Albert Lea Tribune

Larry Pence said Albert Lea is a community with a high population of shore fishing. Three spots he recommends on Fountain Lake are:

• Below the dam, near China Restaurant 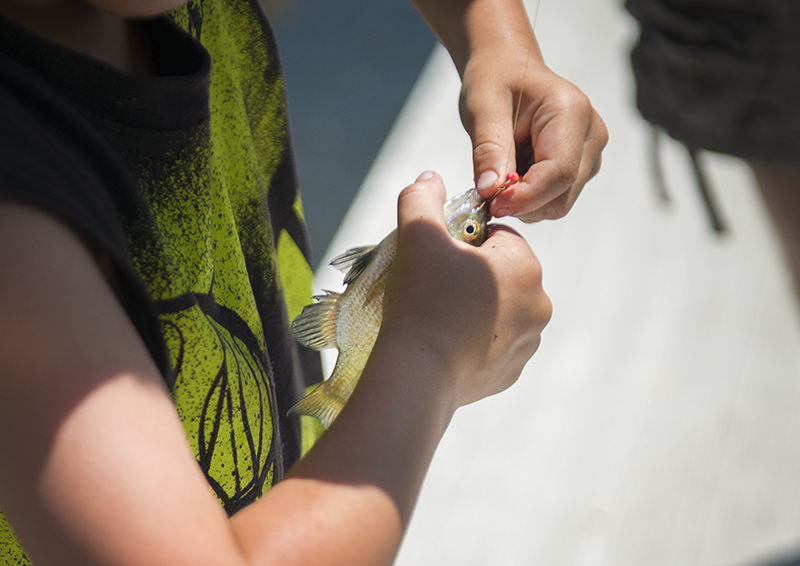 Ayden Woodside unhooks a sunfish he caught Friday along Edgewater Bay with his grandfather, Jon Woodside, before releasing it back into Fountain Lake. – Colleen Harrison/Albert Lea Tribune