Memorial services for James Willard Hanson will be at 1 p.m. Wednesday at Bonnerup Funeral Service in Albert Lea. The Rev. Kent Otterman will officiate. Visitation will take place one hour prior to the service and interment will follow the service at Hillcrest Cemetery. 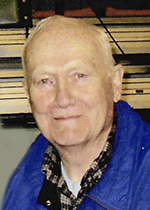 James W. Hanson of Albert Lea went to be with his heavenly Father on Friday, June 22, 2018, at Good Samaritan Society of Albert Lea from complications of multiple sclerosis and Parkinson’s disease. He passed away peacefully in his wife’s arms and was surrounded by his loving family.

James “Jim” Hanson was born Sept. 20, 1938, in Wells, the fourth child of 11 to Orville and Nellie (Haas) Hanson. Jim graduated from Albert Lea High School in 1956. In 1961, Jim married Mary Koester, and to this union one son was born: Douglas. The couple later divorced.

Jim owned and operated his barber shop in Good Thunder. He also volunteered with the local fire department. In 1977 Jim worked for the state of Minnesota Department of Corrections in Stillwater for 25 years, retiring as a lieutenant. In 1996 he moved back to his hometown of Albert Lea to be closer to family. Jim was a hard worker, picking up many odd jobs after retirement.

He had a great love of the outdoors, but — most of all — he cherished his special bond with his grandchildren. A favorite memory was spending time with them at the family cabin on Tom Lake, teaching the grandkids how to fish and the ins and outs of the woods. He also enjoyed grouse hunting season and always looked forward to going up north, hunting with his best friend, David Wimes.

“Rest in peace my love.  Blessed be your memory … and yes, dear, there are caramel rolls and chocolate malts in heaven!”