Janet Carol (Solem) Drangstveit passed away peacefully at home Thursday, May 17, 2018,  surrounded by her family. Janet was born in the afternoon on Aug. 27, 1937, at her family farm in Grygla. Janet graduated from Lincoln High school in Thief River Falls on  June 3, 1955. 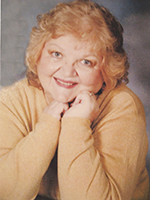 After being bribed by a friend with steaks to go on a blind date with Orvin Drangstveit, she did. They were married six months later on Nov. 4, 1957. Janet and Orvin’s 60 years together brought many blessings that include three beautiful children, Melody, Tami Jo and Dion; six grandchildren, Tara, Lance, Kyler, Carson, Hunter and Ryder; and three great-grandchildren, Tristan, Mija and Kellen.

Janet’s family was her pride and joy. She loved being a grandma and had a soft spot for her “babies” (grandchildren) and her “great’s” (great-grandchildren).

Janet loved to travel, which included Norway, Denmark, Israel,  Italy,  Vatican, Cooks Island, all of the islands of Hawaii, the Bahamas, Tahiti, Canada and countless trips to the Oregon coast.

Janet was a talented painter, loved to read, was part of the UFFDA band in Minnesota and was learning to play the banjo. She also loved to embroider; her beautiful embroidered dish towels are treasures which she had donated several sets to the Shriners as fundraisers. Her fundraising activities for the Shriners provided several children with free wheelchairs. Janet was also a lifetime Sons of Norway member.

Janet had a warm heart and loving nature about her. She would help anyone who needed it. She had an infectious smile and will be missed by her family and friends dearly!

A memorial service to celebrate her life will be at 1 p.m. Saturday at St. Luke Lutheran Church in Portland, Oregon.