A memorial service for Janice K. Paulson Jacobson will be at 2 p.m. Saturday at the Vineyard Church in Albert Lea. The Rev. Matt Hundley will officiate. Visitation will take place one hour prior to the service. A private burial will take place at Calvary Lutheran Cemetery near Rapidan at a later date.

Janice passed away in her sleep on Monday, June 4, 2018, at Thorne Crest Senior Living Community in Albert Lea. She was 77. 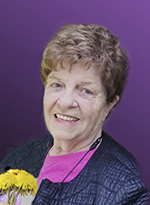 Janice Kay (Bement) was born April 16, 1941, to Alfred and Gwendolyn (Jaycox) Bement in Blue Earth County. She was raised near Rapidan, where she would graduate from high school. She continued her education to become an operator.

On Nov. 7, 1959, Janice was united in marriage to Lloyd Paulson, and to this union, Kenneth, Lori Kay, and Kari were born. She would also get the privilege of being a stepmom to Lloyd’s son, David. Lloyd would pass away in 1984. Jan would marry Arlyn “Jake” Jacobson on June 22, 1985. The couple spent many years together until Jake’s passing in 2004.

Janice spent most of her life living in rural Rapidan. She moved to Albert Lea in 1999, and has been a resident here ever since. She was the owner of Moniques Boutique Consignment Store. She was also a professional manicure and pedicure technician at Classic Reflection Salon and Spa. Janice was deeply rooted in her faith. Most recently, she was a member of Vineyard Church in Albert Lea. Previously, she was active in the Lutheran faith in Rapidan, where she served many various roles in the church. In her free time, Janice enjoyed teaching folk art painting, working in her flower gardens and loved anything that was pink. If Janice wasn’t working on something, you could most always find her reading her Bible.  She can be described as a loving caregiver who was friends with everyone, always giving hugs and kisses.

She is preceded in death by husbands Lloyd Paulson and Jake Jacobson; a daughter in infancy, Lori Kay; and both parents Alfred and Gwendolyn.