Memorial services for Jean L. Wilson will be at 11 a.m.Wednesday at South Blue Earth Lutheran Church in rural Bricelyn. The Rev. Reid Ellis will officiate. Interment will be in Graceland Cemetery in Albert Lea. Friends may visit with family one hour before services at the church. 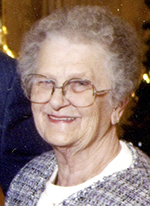 Jean Lucille was born June 16, 1935, in Worth County, the daughter of Gilman and Cora (Troe) Groe. She and her 10 siblings grew up in the Joice, Iowa, area.

She married Samuel D. Wilson on July 5, 1953, at Salem Lutheran Church in Lake Mills. Sam was in the wholesale plumbing business and they moved around until settling in Albert Lea, where they raised their family. They retired to their lake retreat on First Crow Wing Lake and later returned to the Bricelyn area.

Jean enjoyed her church family at South Blue Earth Lutheran Church. She served as lector at church services and was very active and held offices in WELCA. She quilted and did other church projects for charity, as well as assisted with bingo at St. Luke’s Care Center. Over the years Jean was very passionate about her involvement with the Legion Auxiliary — locally and at the district level. In earlier years she was active in the Order of the Eastern Star.

Jean loved to travel. In early years the family tented and camped and in later years she and Sam enjoyed their adventures in their motor home.

In addition to raising her family, Jean had many interests: playing cards — especially bridge and 500, quilting, knitting, crocheting, cooking, reading, jigsaw puzzles, gardening and canning, to name a few. Her canine friends were a very important part of her life. Spending time with her children and her siblings were always joyful times for her. Whether it was baking cookies, making applesauce donuts, lefsa or salsa, fishing up north, binge watching “Blue Bloods” or a competitive games of cards, being together made it better.