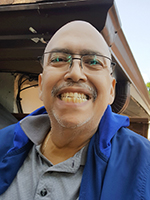 He was born Aug. 13, 1955, in Tacoma, Washington, the son of Duane and Betty (Hoium) Haines. John graduated from Glenville High School and served in the U.S. Army. After his military service he returned to Minnesota and lived in Owatonna for the last 40 years. John worked for Viracon and Minnesota Correctional Facility-Faribault. Health issues forced John’s retirement in 2010.

John was a member of the Jaycees and Big Brothers Big Sisters of America. He enjoyed collecting coins and matchbox cars. John loved playing games with his family. Among his favorites were Farkle and playing the “Train Game” with his grandkids. John’s grandchildren were always a main focus in his life, whether they were living near him or several states away.

He is survived by his daughter, Katie (and Calvin) Mitchell, of Covington, Georgia; brother, Jack Haines, of Glenville; sisters Judy (and Tim) Clear of Owatonna, Joyce (and John) Remkus of Rosemount, Jenne (and Kenneth) Schumacher of Hollandale; and many nieces and nephews.

He was preceded in death by his grandson, Alex; and brother, James.

Visitation will be from 2 to 4 p.m. Sunday at Michaelson Funeral Home with military honors provided by the Steele County military funeral unit at 4 p.m. In lieu of flowers, memorials are preferred to the family to be given to the charity of their choice.