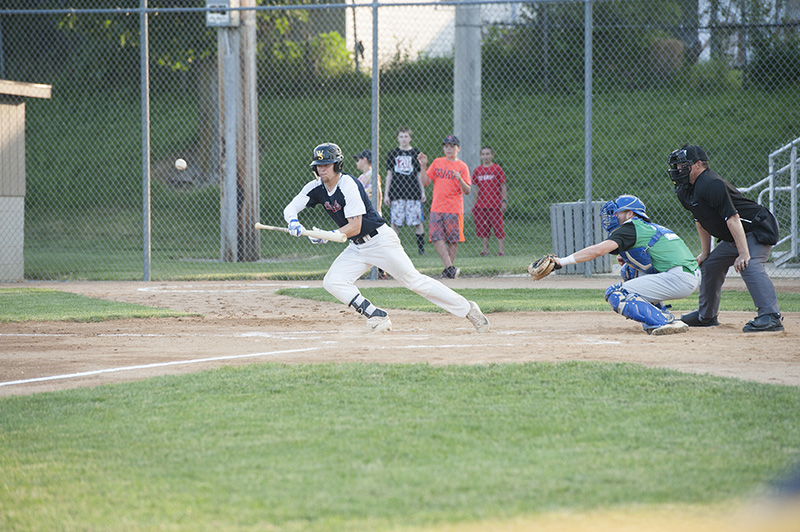 Lakers' third baseman CJ Neumann lays down a bunt early in the game against the Whitecaps Friday night. The Lakers would win the game in the 10th inning. - Tyler Julson/Albert Lea Tribune

A late home run willed the Lakers into extra innings, where they were able to pull out the win over the Whitecaps 9-8.

The Whitecaps started the scoring in the first inning with three runs. They led off with a triple, which came across the plate the very next at bat with a sacrifice hit. A single and a walk would put two runners on base and both were brought in by a double. 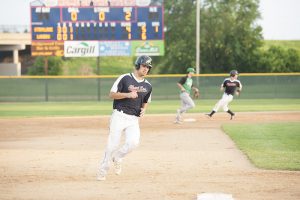 The Lakers got two runners aboard in the bottom of the first after back-to-back singles from Jack McCarthy and Mitchell Keeran, but they were left stranded after a strikeout ended the inning.

After a one-two-three inning defensively, the Lakers got Thomas Krause and Colby Schmidt into scoring position after they were advanced by a sacrifice bunt by CJ Neumann. However, they were once again unable to push the runs across, ending the second inning down 3-0.

Storm Lake added another in the third, but Albert Lea would respond in the bottom half of the inning by scoring a run with a double off the bat of Krause.

The Lakers would play stellar defense in the fourth and fifth inning, putting down the first six batters they saw. Unfortunately, they couldn’t capitalize on the scoreless defensive innings. 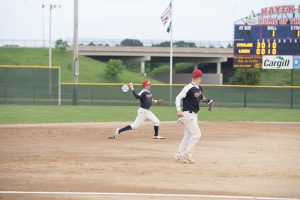 Albert Lea would climb closer to Storm Lake in the sixth inning by adding two runs. Schmidt started the inning with a lead off walk, followed by another walk from Keanu Van Kuren. They were both batted in by a monstrous double from Liam Spence.

The Whitecaps expanded on their lead in the eighth, by adding four more runs and taking a five-run lead into the bottom of the inning.

Spence got another RBI in with a two-out single in the eighth. He would then come in for a run himself after McCarthy stole second, trimming the Whitecap lead to three.

Down by three entering the ninth, the Lakers needed a rally, and a rally is what they got. L’Donta Howard led off with a single, followed by another single from Schmidt. Josh Dudden then stepped up and crushed a three-run homer to tie the game at eight, sending the game to extra innings.

Three walks from Spence, McCar- thy and Keeran put Zach Hutchison in a spot to win the game. Hutchison would capitalize by hitting a sacrifice fly to center, winning the game in the 10th.

Robin Allen finished the game on the mound, allowing two runs and striking out three batters.

The Lakers win streak extends to four as they climb to 9-2 on the season and will play again on Saturday against the Bancroft Bandits.