The Little Falls man arrested Friday after stealing a car from Albert Lea and leading authorities on a high-speed chase that ended on Interstate 35 near Clear Lake is facing multiple charges in Iowa tied to the incident. 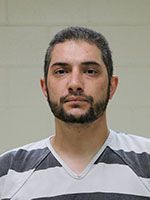 Jacob Aaron Eberly, 32, is being held in the Cerro Gordo County Jail on charges of eluding authorities, second-degree theft, operating while under the influence and leaving the scene of an injury accident.

Eberly allegedly stole a 2000 black Expedition from 2340 Crossroads Boulevard in Albert Lea and then left southbound on I-35.

Court documents allege speeds reached 100 mph during the chase. Officers attempted to stop Eberly,  but he failed to stop even when lights and sirens were activated.

At one point, officers attempted to use stop sticks to get Eberly to stop his vehicle, but he allegedly went around the sticks and struck another vehicle, causing it to go into the median. The driver of the other vehicle was injured.

Officers attempted to use stop sticks a second time, when Eberly then reportedly exited the interstate at Exit 193 and ran a stop sign.

Officers reportedly rammed the vehicle to end the pursuit, which caused the Expedition to roll.

Eberly was taken to the hospital to be examined by medical personnel, where he reportedly exhibited signs of intoxication by methamphetamine, including paranoia, rapid speech, elevated heart rate and elevated blood pressure.

A search warrant was obtained for a blood sample, which will be tested for toxicology.

Eberly reportedly has a revoked driver’s license in Minnesota and has a previous operating while intoxicated conviction from Aug. 28, 2017, in Minnesota.

As of Wednesday morning, he had not yet been charged in Freeborn County on the case.