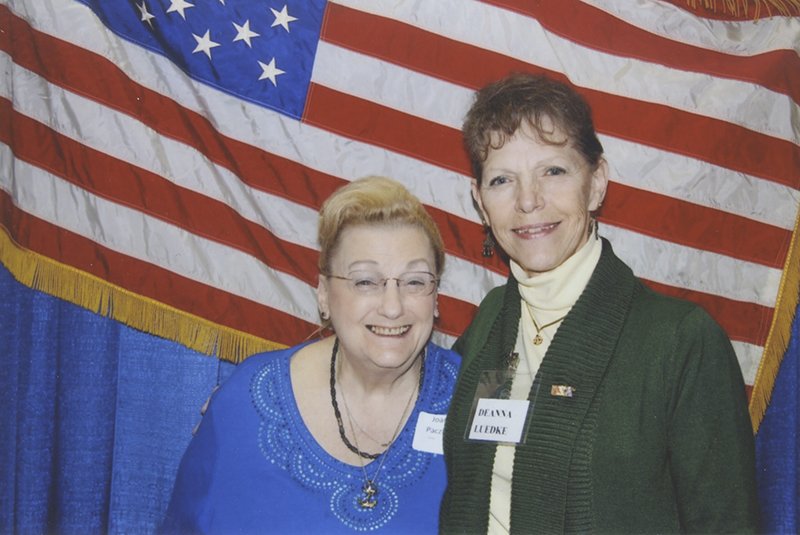 Joan Paczkowski, SA, was chosen to be a member of the 21st Freedom Honor Flight. She was accompanied by Deanna Luedtke, CW2-Retired. Provided

Deanna Luedtke is the first commander of the Women Veterans of Freeborn County.

On May 11 Joan Paczkowski, a veteran from the Korean War era who worked in communications, was chosen as a member of the 21st Freedom Honor Flight out of LaCrosse, Wisconsin. Accompanied by myself, Deanna Luedtke retired chief warrant officer two, we flew to Washington D.C. on a chartered jet.

Arriving at the airport at 5:30 a.m., we were met by the Legion Riders Honor Guard at the door. We enjoyed a light breakfast, passed through security and were given a ditty bag with snacks and water. School children sang patriotic songs as we got organized. We were sent off with a contingent of National Guardsmen, Scouts, Legion Riders and others, all saluting our very emotional departure.

Upon landing at Reagan Airport, we were greeted with a water salute from the fire department and a block long, up both sides, of a welcoming group. Patriotic music played and the group shook the veterans’ hands and gave a verbal welcome as often as possible.

We had a police escort for the entire day due to the heavy traffic and our tight schedule. We began at the World War II Memorial, with a beautiful reflecting pool. Sen. Bob Dole sat on a chair outside the memorial to help welcome us. Lunch was Arby’s Market Fresh boxes. From there we went to the Vietnam Wall, the Lincoln Memorial and the Korean Veterans Memorial. After that we got to observe the changing of the guard at Arlington Cemetery. Roll call was taken every time we got back on the buses.

We went to the Air Force Memorial for pictures of the veterans under the three spires. Then, the drivers took us around the city and pointed out various famous buildings, and finally went by the Marine Memorial, Iwo Jima. Our last stop was at the newly opened Sept. 11 Memorial, which was a rather unusual design in front of the Pentagon.

Additionally, it was easy to see where the Pentagon walls were repaired after the plane crash as the new bricks are a slightly different color.

Due to some complications, we didn’t leave Reagan National Airport for over two hours after our original scheduled take-off. We had a bag dinner on the plane while we were waiting. We arrived back in LaCrosse about midnight to an incredible contingent of people to welcome us, in spite of the late hour. The homecoming was even more impressive than the send-off. A wonderful band was playing. Military personnel, civilians and scouts lined up from the hangar to the plane and saluted us. They even had fireworks on the tarmac.

Overall, it was a very long, well organized and incredibly exciting day for the veterans as well as the guardians.