Making it their own 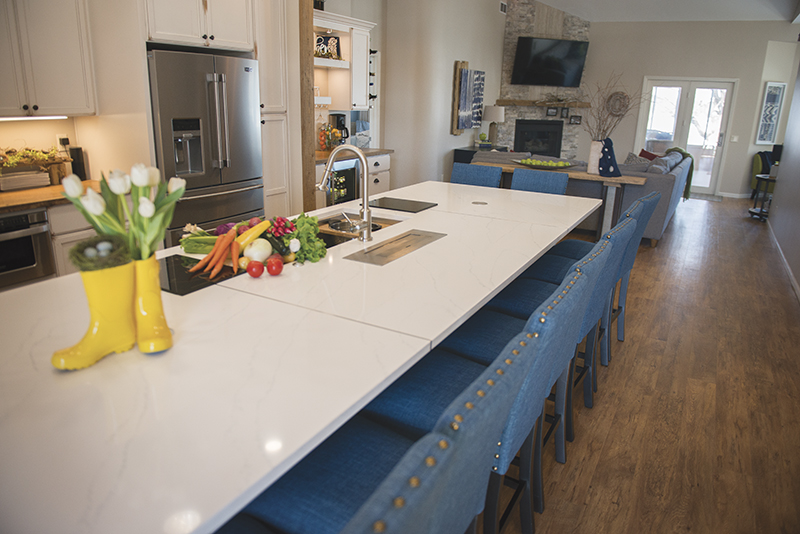 Every house Albert Lean Cyndy Bartness has ever lived in, she has remodeled. So it came as no surprise when she and her husband, Lynn, decided to purchase a house on Campus Lane last year that she would do the same there.

“My background is I just re-do stuff all the time,” she said. “I’ve loved to do it.” 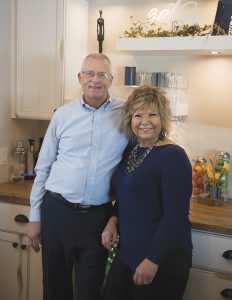 The Bartnesses took possession of the house at 2810 Campus Lane, formerly owned by Herb and Barb Anderson, in June of last year.

They said they sold their 5,000-square-foot house in Lake Mills — along with all of their old furniture — and moved into the the 2,000-square-foot twin home. Their old house, they said, was too large and had too big of a yard.

“We were going to build a new house, but when I came here, I thought there’s something about it that’s right to me,” Cyndy Bartness said.

They liked that the new house was on one level and that the yard was smaller — and the fact that it overlooks White Lake was a bonus.

Before they bought it, however, she said she called a carpenter and asked if the home would still be structurally sound if they removed one of the walls separating the front entryway and the kitchen. Once that was approved, they moved forward with the purchase. 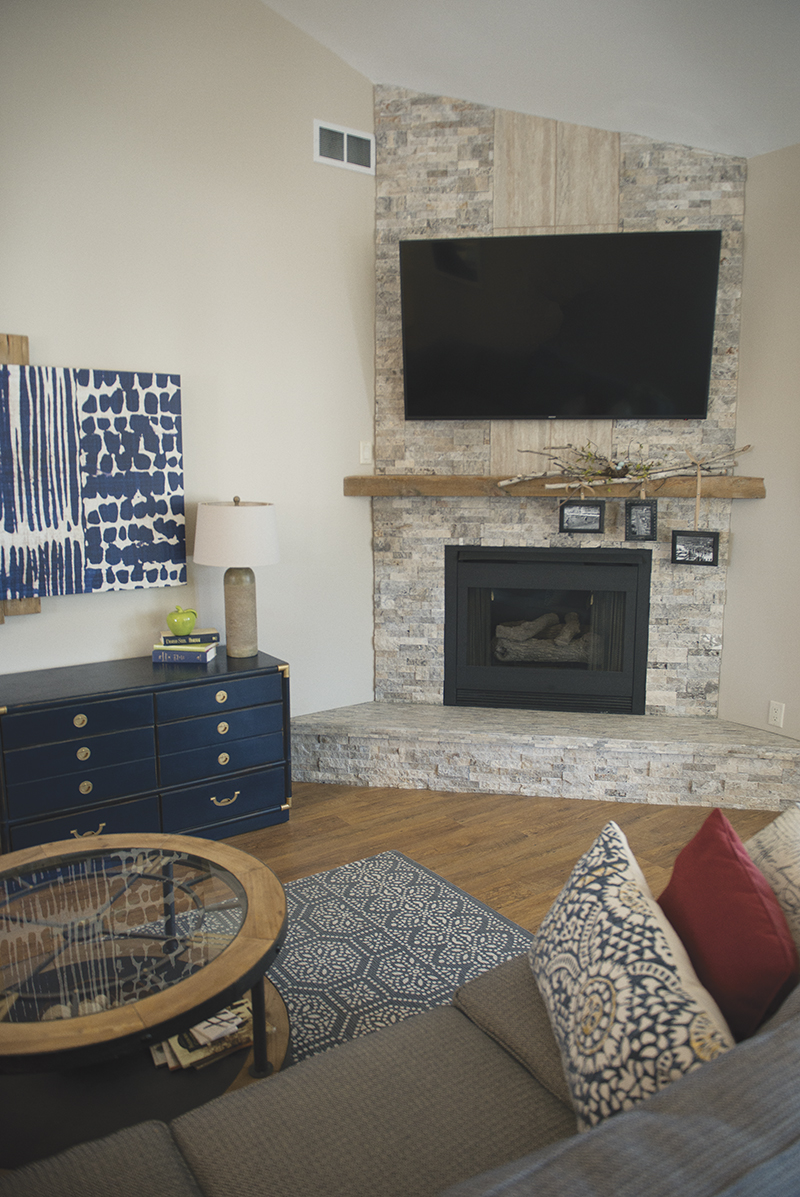 Cyndy Bartness did the stonework on the fireplace in the living room. – Colleen Harrison/Albert Lea Tribune

Without the wall, the space is now open — from the front entryway to the kitchen, the living room and then the porch overlooking the lake. Hickory wood floors greet visitors from the front of the house to the back.

The kitchen was completed with the help of Broadway Home Design. A promoter of re-using when she can, she said the old cabinets have been renovated and are in other parts of the house, including the garage and bathroom.

The kitchen includes stainless steel appliances, a double oven, two induction burners, a Galley sink and HanStone quartz countertops on the kitchen island. The appliances and televisions in the home came from Sorenson’s Appliance in Geneva. 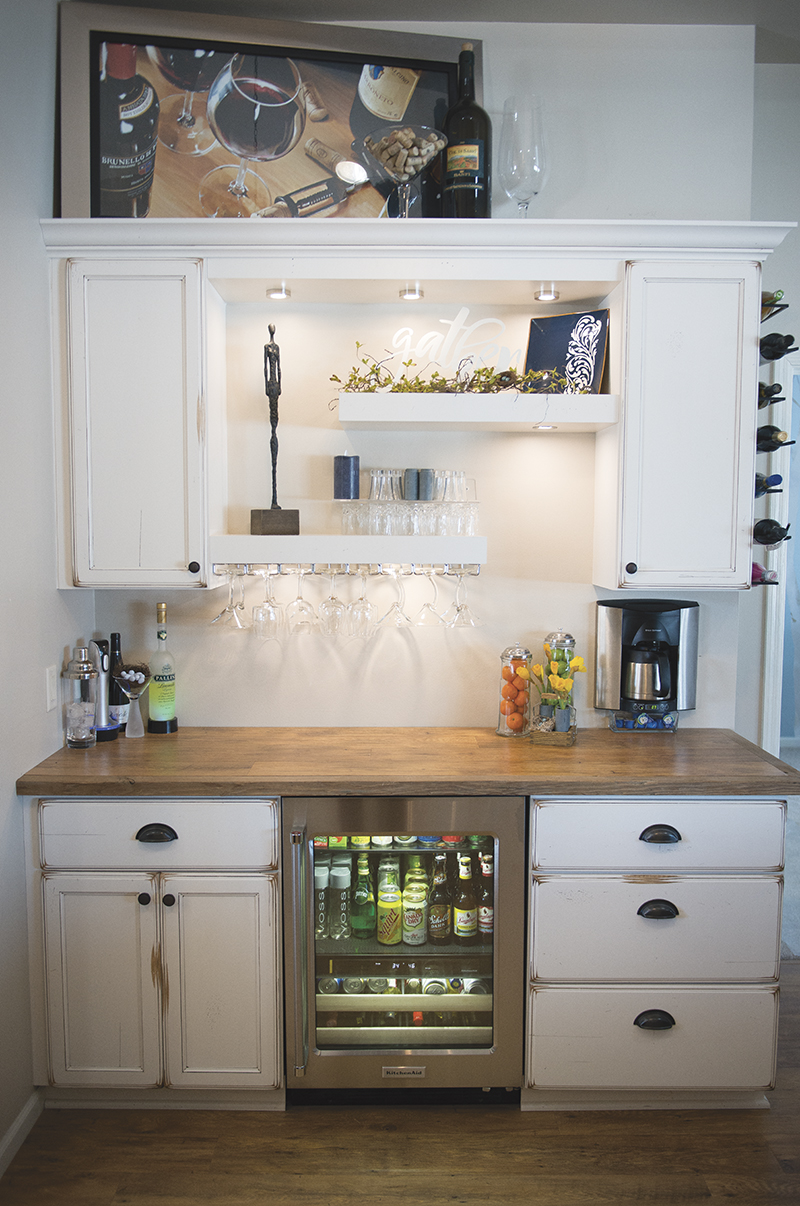 This area in between the kitchen and the living room is dedicated to the three Cs, according to Cyndy Bartness — candy, cocktails and coffee. – Colleen Harrison/Albert Lea Tribune

Cyndy Bartness said she used wood from a 150-year-old barn that belonged to the family farm of a friend’s husband, which had fallen down, as accents throughout the house. There are wood beams along the ceiling in the kitchen where the wall was taken down, framing on the wooden countertops underneath the cabinets and in other locations throughout the house. The same wood is used for their fireplace mantel and as an accent with a piece of art on the wall.

She power-washed the wood and said she purposely left some of the imperfections in it. Her handyman, Ruben Falcon, used some of the wood to make a sofa table. He also made sliding barn doors and installed them. 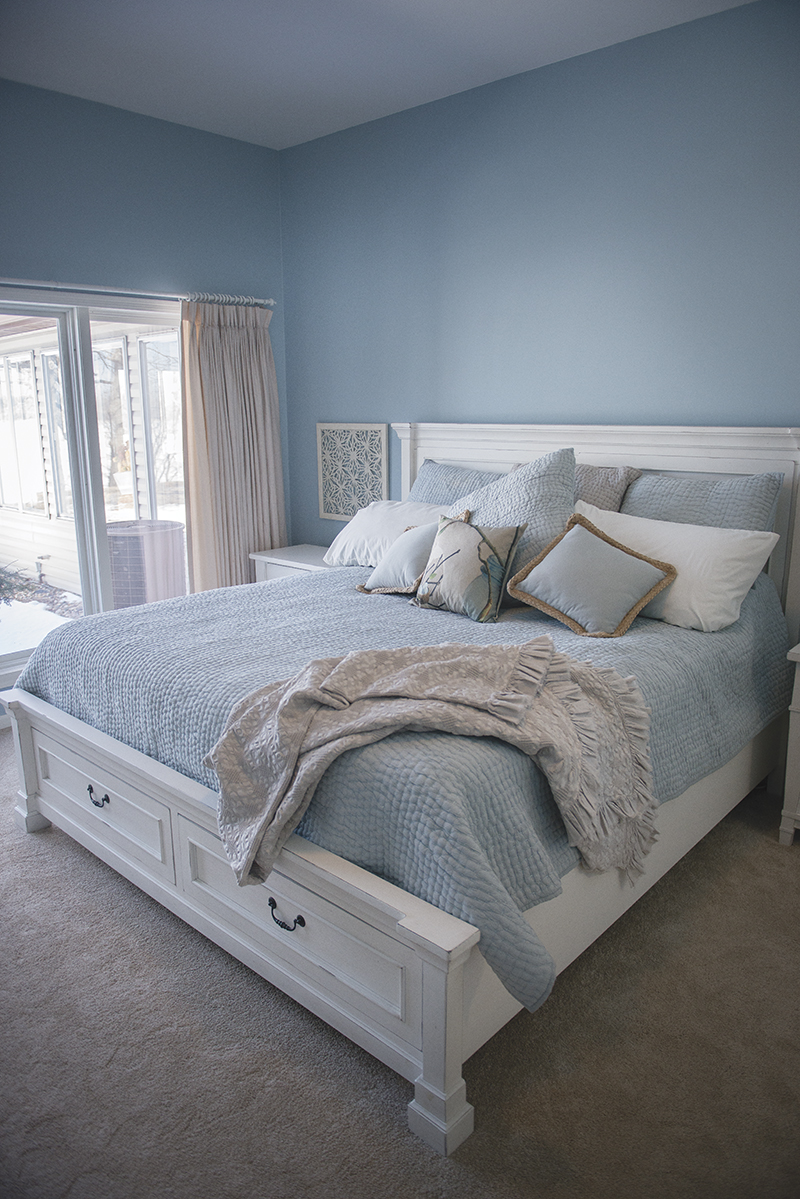 Cyndy Bartness said they had a large dining room in their old house but only sat in there a couple times a year. Instead of having a dining room that would go unused at their new house, they said they wanted to have a large island with a big counter, where their guests can be seated around the island while she cooks and entertains.

One feature in the island that accommodates the entertaining is a space she can either fill with ice and drinks when entertaining, insert a custom-made fireplace or otherwise grow wheat grass. 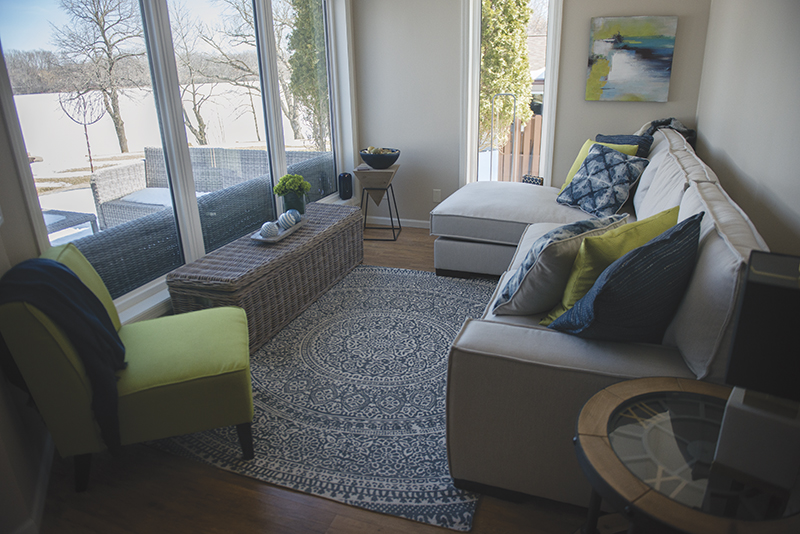 The rooms along the back of the house all boast expansive views of White Lake. – Colleen Harrison/Albert Lea Tribune

There is also a bar area with a separate refrigerator for drinks, where the Bartnesses can set each shelf to a different temperature and a space for growing herbs. Cyndy Bartness joked it was her area for cocktails, coffee and candy.

In the living room, she renovated the fireplace, adding new stacked stone and a wood mantel.

The master bedroom is painted a light shade of blue, which provides a calming feel, and one wall she painted birch branches on. 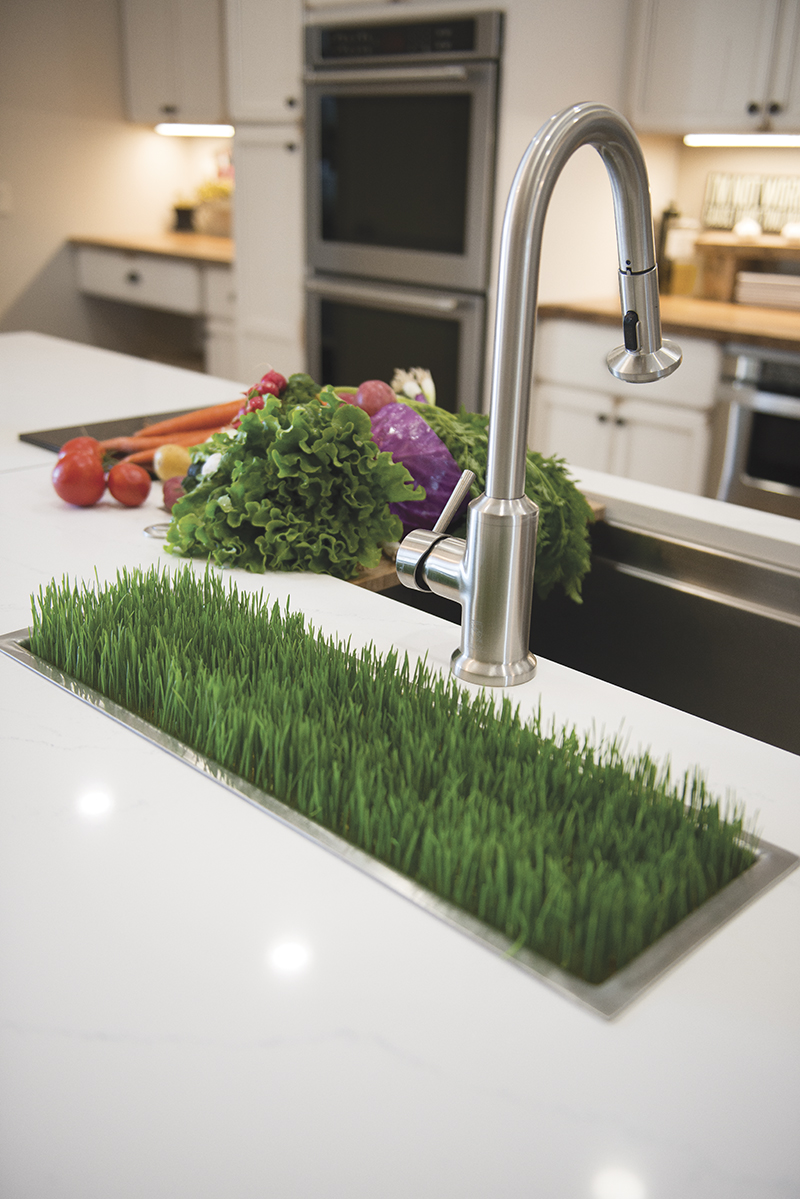 A tray cutout with a drain inside of it by the kitchen sink can house wheat grass Cyndy Bartness is growing, ice for drinks during parties and a fireplace. – Colleen Harrison/Albert Lea Tribune

She has also renovated one of the bathrooms and is working on the second.

When asked about her style, she described it as contemporary, with “a little bit of everything.”

She joked that while her husband has many talents, construction isn’t one of them. 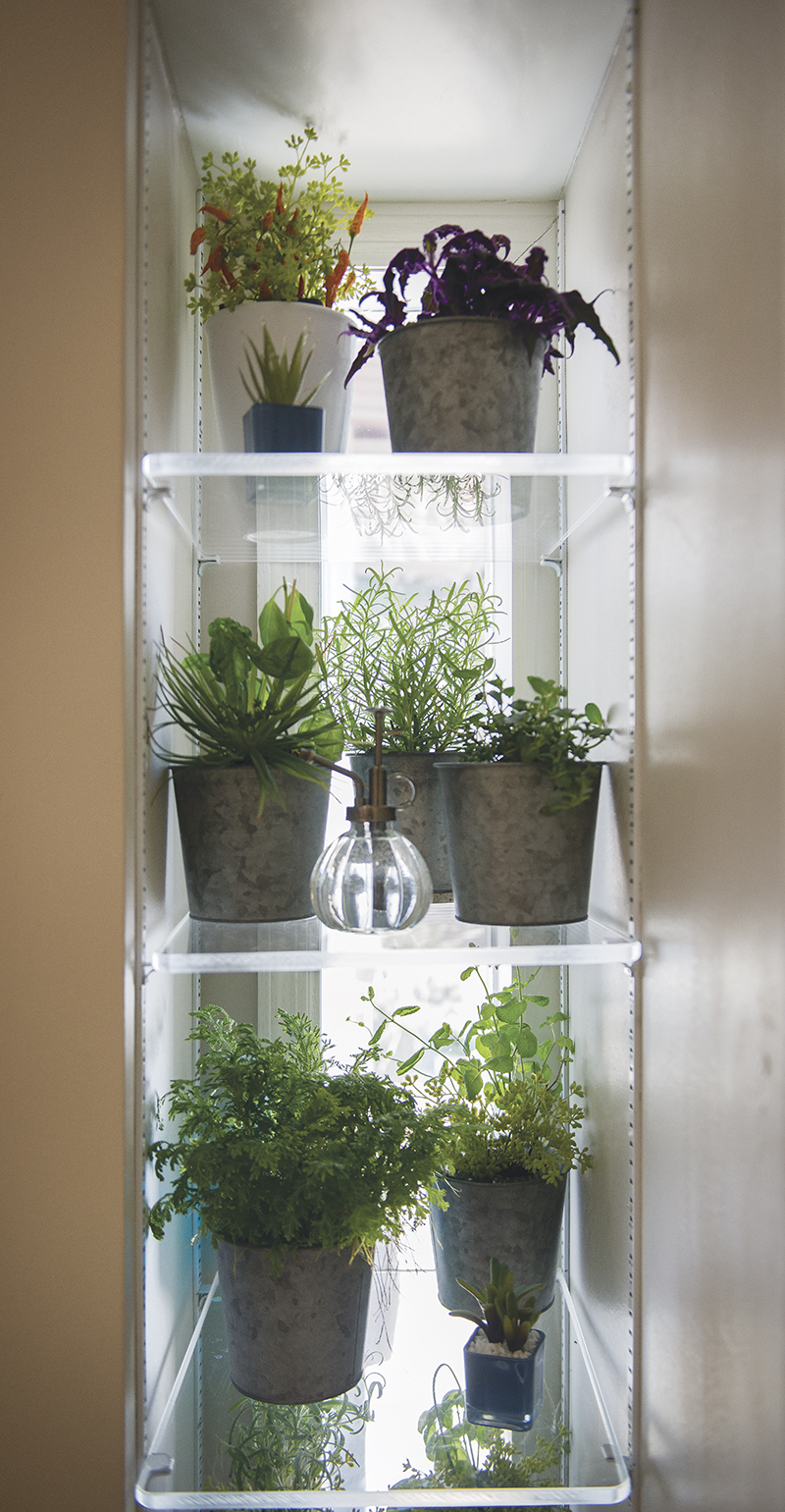 Rows of herbs sit on shelves in the corner of the Bartness’ kitchen. – Colleen Harrison/Albert Lea Tribune

“It’s better if I just stay out of the way,” Lynn Bartness said with a laugh. “Cyndy, for sure, is the designer and did a wonderful job on detail.”

He said he and his wife enjoy their new neighborhood.

Lynn Bartness, who has worked for Cafourek Insurance in Albert Lea for 34 years, said he and his wife were already familiar with the city but are enjoying the recreational opportunities available here now. 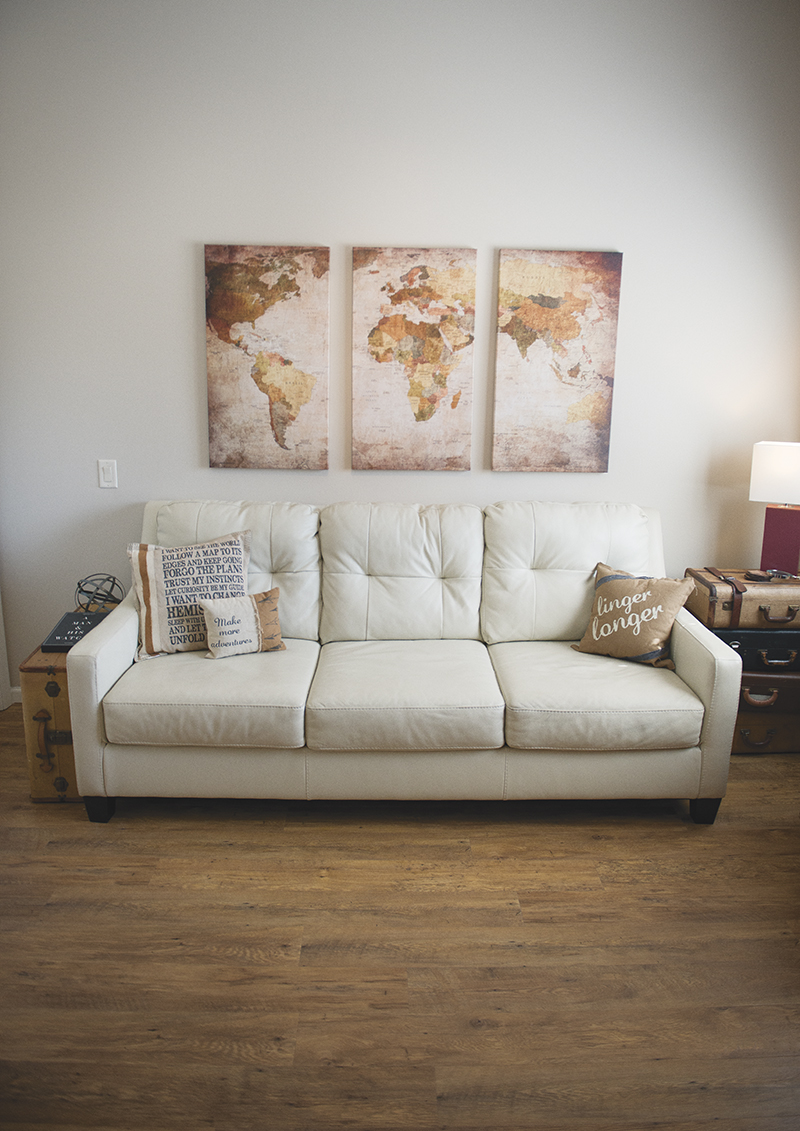 Lynn Bartness likes to sit in this room near the front of the house. – Colleen Harrison/Albert Lea Tribune