Man charged with having knife in courthouse

An Albert Lea man was charged Wednesday in Freeborn County District with possessing a knife when he met with a probation agent earlier this week at Freeborn County Courthouse. 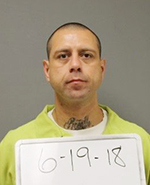 Anthony Bernard Hernandez, 41, faces one count of felony possession of a weapon in a courthouse complex.

Hernandez was arrested after two deputies were requested to assist with a disorderly person Tuesday in the Court Services office who was going to be taken to the jail on an arrest and detain hold, according to court documents.

Hernandez reportedly began to bargain with the agent about the length of his incarceration and at one point stood up and put his phone to his ear, allegedly revealing a silver folding knife sticking out of his right front pocket, the court reports state.

A deputy secured the knife from his pocket without incident, and no other weapons were found.

The knife was a Fossil folding silver knife about 8 inches in length.

The Freeborn County Courthouse has numerous signs near the entrances to the building that state no weapons are allowed in the building unless otherwise approved by the sheriff.

Hernandez is next slated to appear on the charge July 5.