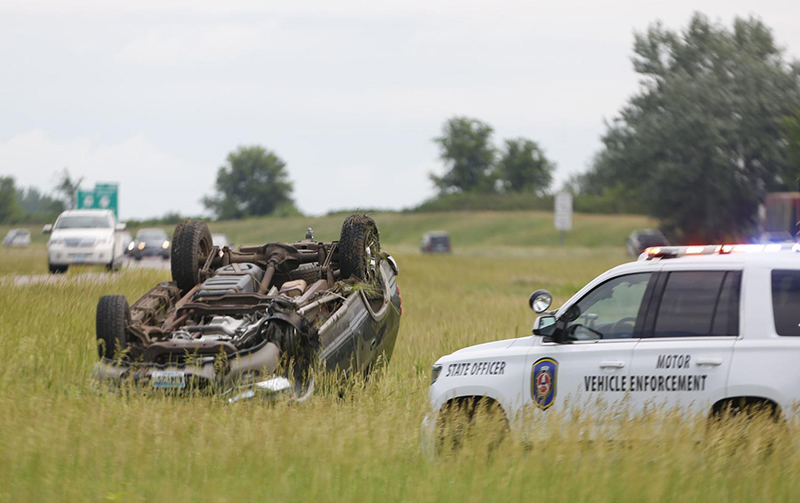 A vehicle involved in a rollover sits on its roof in the median Friday south of exit 194 on I-35 in Clear Lake. - Chris Zoeller/Mason City Globe Gazette

A Little Falls man is in custody after he reportedly stole a vehicle in Albert Lea Friday afternoon and led authorities on a high-speed chase that ended when his vehicle crashed in the median of Interstate 35 near Clear Lake.

An attempted carjacking in Ellendale was reported 16 minutes prior to the theft of the car in Albert Lea, but at this time it is unclear if the two incidents are related.

According to the Albert Lea Police Department, the Freeborn County Sheriff’s Office received information from Steele County at 2:45 p.m. of an attempted carjacking involving a gun at the Ellendale Casey’s at the intersection of State Highway 30 and Interstate 35.

Police stated the suspect vehicle from that incident was described as a black Honda Accord with a dark-skinned male as passenger and a female driver. The vehicle was driving southbound on I-35.

After receiving the report from Steele County, deputies from the Freeborn County Sheriff’s Office and officers from the Albert Lea Police Department deployed in areas to watch southbound I-35 for the suspect vehicle.

At 3:01 p.m., police received a report of a black Expedition that was stolen from 2340 Crossroads Boulevard. The caller stated the person who stole the SUV had driven a vehicle onto the property and then taken the Expedition. 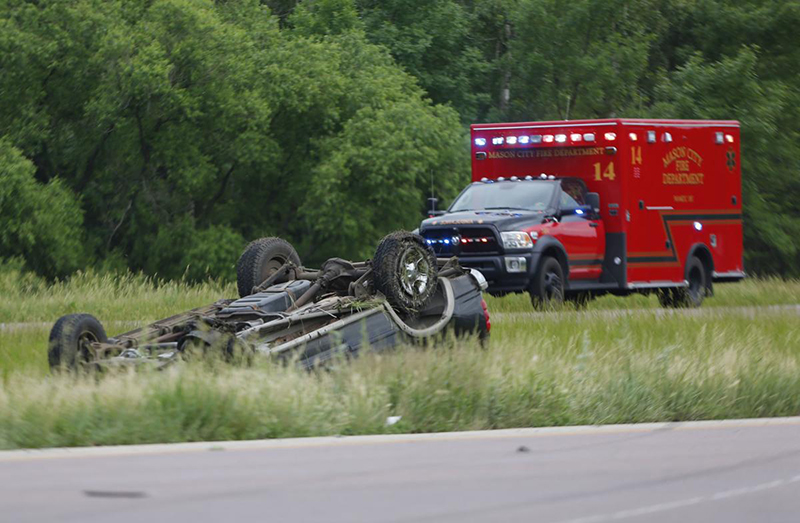 A vehicle involved in a rollover sits on its roof in the median Friday south of exit 194 on I-35 in Clear Lake. – Chris Zoeller/Mason City Globe Gazette

The car left behind was a dark blue Hyundai reported stolen from Eagan.

The driver was described as a dark-skinned male and was the lone occupant in the blue Hyundai and the sole person to enter the Expedition.

Officers of the Albert Lea Police Department and deputies of the Freeborn County Sheriff’s Office attempted to catch up to the stolen vehicle and people following before entering Iowa, but because of the speed of the stolen vehicle, they were unable to do so before crossing the Iowa state line.

Police stated Iowa State Patrol troopers caught up to the stolen vehicle at about the same time the Minnesota officers did, and the driver fled when emergency lights were activated.

According to police, speeds during the chase reached up to 100 mph. The chase ended near southbound milemarker 196 when the Expedition rolled over in the median. Eberly was the lone person in the vehicle.

At least two Iowa State Patrol vehicles were damage during the pursuit, along with an unrelated civilian vehicle.