Marvin Kenneth Flugum, 94, went to his final home in heaven and into the loving arms of his Savior, Jesus, on Friday, June 22, 2018.

Interment will be at Sunnyside Cemetery in Lake Mills following the service. He will be placed alongside his beloved wife, Deon, who went on ahead in 2015 to help our Lord prepare a fishing hole and a garden for him to tend. Emmons Louis/Tveite American Legion Post 317 will provide military honors. 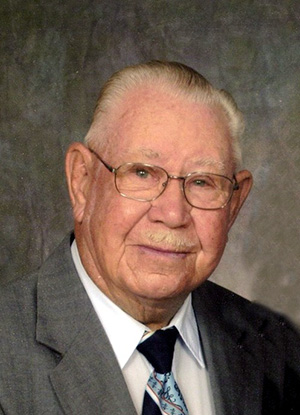 Marvin was born to the union of “Ed” Neils E. Flugum and Andrina J. (Holstad) Flugum on Dec 2, 1923. Marvin attended country school northwest of Leland in his early years, where he learned the English language. His latter years were taught in Leland School until about the ninth grade. He desired to go on with high school, but due to his father’s sudden passing, he needed to help his mom and siblings with the family farm. He had a great work ethic learned from a young age. Marvin, along with his other siblings, worked extremely hard in their attempt to assist their mom with the many chores at home. This was so she could keep the farm that his father had purchased only a few years before his passing.

It was at the popcorn stand in Lake Mills he met the love of his life, Deon Stewart. It was well known that Marvin fell head over heels for Deon the moment he first met her at her young age of 15. Marvin patiently waited and proposed to Deon when she was almost 18. They were married on May 20, 1945, and that wonderful partnership of 70-plus years began. Marvin lost his lovely wife on Aug. 1, 2015. To their union was born a little white-haired daughter, Laurel, in November 1947. Almost three years later, they were blessed with a son, Greg, in June 1950. They waited nearly another seven years until their last child, Nancy, was born in January 1957.

At 17 years of age, Marvin decided he would enlist in the Navy since it was only for a year to serve when the U.S. is not at war. He was stationed on the infamous ship Arizona. His discharge from the Navy was just one week before the attack on Pearl Harbor, where the Arizona was sunk with his 3,000 shipmates. He then enlisted along with his brother, Elmer, in the Coast Guard Merchant Marines and served there from about 1943 through 1945, when World War II ended. He was able to save enough of his military pay for a down payment on a farm two miles east of Scarville, Iowa, where he and Deon began their lifelong, hard and rewarding work of farming.

Marvin and Deon, though very dedicated to farming, as well as many church duties, had their joyous hobbies and activities as well. These included activities such as motorcycle riding, boating, skiing, fishing, hunting, gardening and many, many travels across the United States, including a few trips to Alaska and Hawaii.

Marvin decided to retire from farming full time in 1984 due to a back injury. They had left the farm and moved into Emmons about 10 years earlier. At the time of his retirement, he and Deon began to travel even more, plus wintered in the south of Texas for many years. From that southern home, they traveled to Mexico many times as well as surrounding states, plus took a few cruises to exotic places. Once the temperatures neared 100 degrees down there, they rushed to Minnesota to enjoy the beauty of the Iowa/Minnesota summer and fall. Marvin loved to garden, which was his way of keeping his “fingers dirty” after retiring from his farming operation. He stayed at gardening right through last year. If you knew Marvin, you knew he loved to visit with people. That visiting with people was one of his joys when he sold produce from his garden at the farmers market.