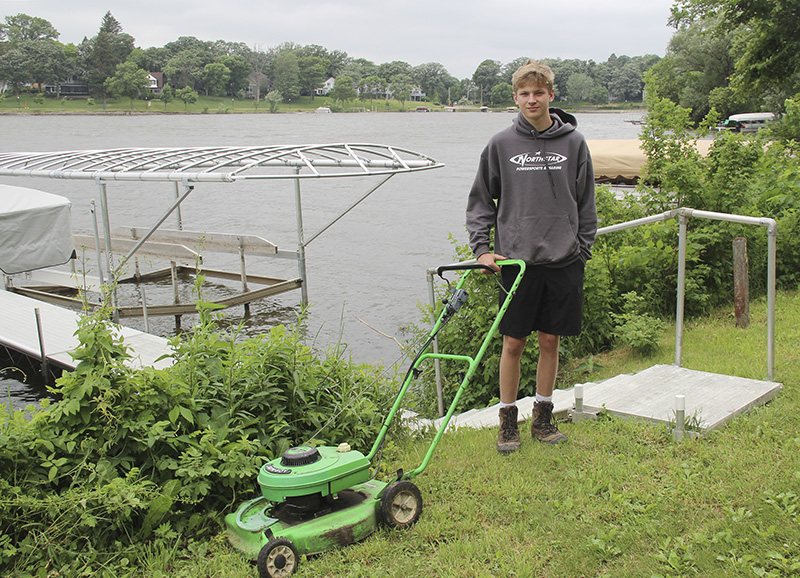 Fifteen-year-old Jack Jellinger mowed his first lawn when he was 11.

Now, four years later, he has started up a new lawn care service for people looking to have the grass mowed around their dock sites on Fountain Lake.

Jellinger, the son of Mike and Michelle Jellinger, said he started out mowing one dock site, a neighbor’s lawn and a few other yards when he tried to figure out a way to expand and come up with a service that wasn’t as tapped into. He figured expanding to more dock sites would be more successful.

“People don’t like having to bring trimmers and mowers,” he said.

He charges $150 a year for the mowing service, but because the season has already begun, he said that price has been prorated to $125. He mows once a week.

His mother said they have advertised the service on Facebook and on fliers and thus far have received a lot of good feedback.

Though he doesn’t think the service will be a long-term career after high school, he said it is giving him some good work in the meantime.

He doesn’t know yet what he wants to do for a career once he graduates high school.

Aside from the lawn care service, Jellinger said he plays a lot of baseball and has been working at his grandmother’s house.

He is on the VFW baseball team, and umpires little league baseball once a week. He also enjoys playing hockey.