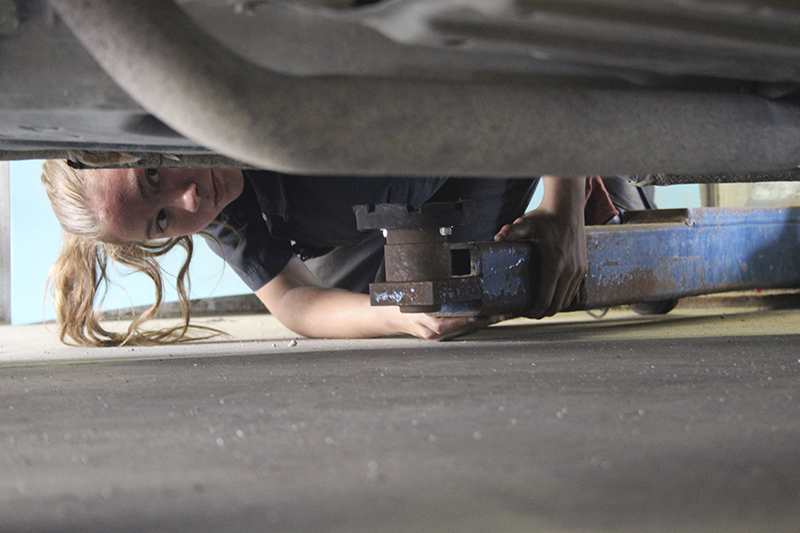 Sydney Collins adjusts part of a lift that will hoist the car up before she starts an oil change. Sarah Kocher/Albert Lea Tribune 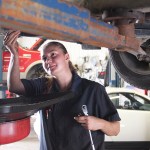 Syndey Collins starts an oil change at Collins Auto Repair. She has been working her way up toward more and more jobs since she started cleaning up around the shop at age 7. Sarah Kocher/Albert Lea Tribune 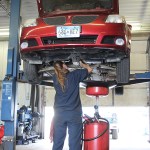 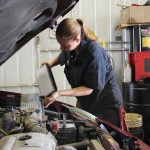 Marc Collins, Sydney Collins’ dad, said he enjoys working with his daughter, as it gives them a chance to spend time together in a different environment. Marc Collins owns Collins Auto Repair. Sarah Kocher/Albert Lea Tribune 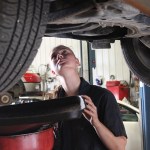 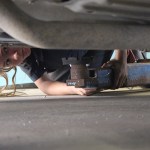 Sydney Collins adjusts part of a lift that will hoist the car up before she starts an oil change. Sarah Kocher/Albert Lea Tribune

On Thursday, in a shirt with her dad’s name on it, Sydney Collins joined him at work. She does this three days a week during the summer, picking up more responsibility as the years have passed.

To start, about eight years ago, Marc Collins said his daughter would clean up around the shop, sweeping floors, washing and painting walls and crushing oil filters.

“She loved it,” Marc Collins said. “She was so proud, I mean, when she was little, yeah, just proud to be here and working. She’s always enjoyed it.”

By now, Sydney Collins said those responsibilities include inspections, oil changes and tire rotations and replacements.

“I just like learning more stuff — each year being able to do more and more on cars,” Sydney Collins said.

Sydney Collins’ position with Collins Auto Repair is most like that of an intern, Marc Collins said: She has the time to learn every task at the pace she needs to get it just right. So there she still is, eight years later, three days a week, working and learning.

“It’s always looked like it was possibility, but they, you know, as you get older, minds change, so I figured she would have changed her mind by now,” Marc Collins said.

Now 16, she has been doing oil changes and more car-related work for one or two summers, Sydney Collins said.

“I’ve always just liked working with things, taking things apart and fixing them,” Sydney Collins said. This summer, she hopes to continue learning and pick up more tasks in the shop.

There is an interest in not just fixing, but in creating: Long-term, she is looking into pursuing mechanical engineering. Before taking an engineering class at school last year and learning more, Sydney Collins said eventually taking over her father’s business was the primary game plan. Currently, it’s a toss-up between that and seeing where the engineering field could take her.

“It could be hers when she’s done, if she wants (it),” Marc Collins said of the shop.

He knows Sydney Collins is considering engineering, and that the future is open-ended in that regard.

“I just, you know, want her to do whatever she enjoys,” Marc Collins said. “I enjoy working on cars myself. I don’t — can’t  — see myself doing anything else, so if she feels the same, then yeah, just as soon as she, she’s doing it as well, to do it in this shop would be the best place.”

In the shop, she enjoys the hands-on work, though she said it can be a challenge to remember everything that could be going on under the hood.

“(My) favorite thing is being able to get my hands dirty, and fixing stuff,” Sydney Collins said.

It is also an opportunity to spend some time with dad.

“It’s fun to work with her,” Marc Collins said — to spend time together to bond in a new atmosphere and to see her learn. She is learning from him, and he is how she got interested in the first place.

“It’s been more like looking at my dad, watching my dad doing it, looking up to him, liking what he’s doing,” Sydney Collins said.