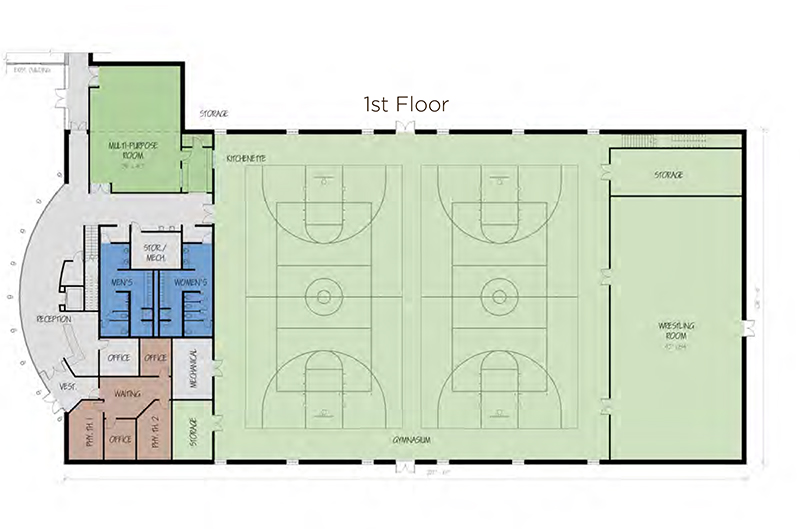 Pictured is a rendering of the first floor for the proposed community recreation center in Northwood. - Provided

NORTHWOOD — A group of parents and community members in the Northwood-Kensett school district formed a committee and have announced plans to build a community recreation center on school grounds.

The plans were made public after the annual Northwood-Kensett Booster Club Golf Tournament on Saturday.

The committee began formulating plans and setting things in motion in June 2017. With the help of the architecture firm Atura, the committee released the initial designs of the proposed recreation center.

Although it is planned to be attached to the school, the wellness center will be available to all members of the community through membership opportunities.

The first design plans for the bottom level include two full-sized wooden basketball courts; a wrestling room capable of fitting two full-sized mats, which can also double as a cheerleading practice room; a multi-purpose room; a men’s and women’s locker room and one or two office spaces that can be leased out to separate entities. The top floor contains a walking/running track, a space for cardio machines and a space for weightlifting.

Pictured is a rendering of the second floor for the proposed community recreation center. – Provided

“The school has had something like this in their vision down the road,” said committee member Ron Hengesteg. “Our committee’s job is to maybe push that vision forward, because if we can start raising money and raising community support, it will give us a good idea of what we can do do get this project off the ground.”

The committee has made trips to several other wellness and recreation centers in the surrounding communities and has come back with favorable impressions.

In the town of Sheffield, Iowa, roughly half the size of Northwood, the community rec center is maintained and keeps up with expenses in large part thanks to the membership numbers. The office spaces also open up another avenue of addition revenue for the recreation center.

Cost to construct the building came in at about $5.4 million, pending that the construction didn’t start until 2021. If started earlier, the cost could be cut down some based solely on the rate of inflation.

Funding for the building is coming solely from community projects, public and private donations and grants. The committee is unsure about how much money it will raise for the project; the hope is to draw enough community support to convince the school board to put the center into its budget.

“I don’t think the school board has an idea of what kind of community support they could get for this,” said committee member Bradley Christianson. “Our job, as a committee, is to not only raise the funds for it, but to get community support behind it, too. Even if we only raise a few hundred thousand dollars, on a five million dollar budget, that’s not a whole lot, but to get the community behind it is the main focus right now.”

Right now, the district has two basketball courts, a small wrestling room and weight room, however, none are open to the public. The addition of the rec center would eliminate the competition for teams and gym times as well as provide a local space for the public to come and workout.

“Me personally, when this started, I thought there was no way we could afford this,” Hengesteg said. “After visiting with the superintendent down at West Fork and seeing what they did and how they’re handling it, there’s no way that Northwood should not have this. With our population and our community needs, we should have this here.”