Memorial services for Roland “Rollie” R. Marquardt of Albert Lea will be at 11 a.m. Tuesday at Bonnerup Funeral Service in Albert Lea. The Rev. Jennifer Gonsalves will officiate. Military honors will be accorded by Albert Lea veterans organizations. Friends may visit with family one hour before services at the funeral home. 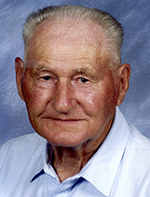 He was born April 6, 1921, in Bowler, Wisconsin, the son of Paul and Clara (Raddant) Marquardt. Rollie grew up with three brothers and a sister — the four siblings exactly matched the number of other people who were in his graduating class. He grew up on a farm and, like most others, loved baseball. His brothers convinced him to go to a tryout at a baseball school in Fond Du Lac, Wisconsin. He ended up signed by the Brooklyn Dodgers organization as a pitcher. In the 1940s there were more levels and leagues; he ended up finishing his first season in Reading, Pennsylvania. He was united in marriage to Florence Fuhrman on Feb. 7, 1941. He continued to play baseball until 1942, when he took time away to serve in the U.S. Navy. Following his honorable discharge, he went back to farm for a couple of years. He got back into baseball in 1946, playing for Class-B, and in 1947 moved to the Triple-A Montreal Royals. While with the Royals, he went through spring training with Jackie Robinson and was proud to be in the stands when Jackie made his debut in Brooklyn in April 1947. Rollie hurt his arm in the spring of 1947, ending his pro career. After his time in Triple-A, a job and the opportunity to pitch for the Packers of the Southern Minnesota League brought him to Albert Lea. He worked for Wilson & Co. as a delivery driver until he retired in 1983. He continued to pitch for the Packers until an arm injury caused him to call it a career.

Throughout his life he enjoyed watching and participating in sports. He bowled in earlier years, and enjoyed four to five rounds of golf a week into his early 90s.

Rollie is survived by his sons Larry and Bob, both of Albert Lea; sister-in-law, Althyn Marquardt, of Mankato; and nieces and nephews.

He was preceded in death by his wife, Florence; his parents Paul and Clara; his stepmother, Mary; brothers Earl, Edgar and Delmar; and sister, Gladys.