Ronald Dean Johnson Sr., 71, of Austin passed away Sunday, June 3, 2018, at his home in Austin. He was born Jan. 15, 1947, in Albert Lea, to Roland and Jurine (Arett) Johnson. Ron grew up in Albert Lea and attended Albert Lea High School, graduating with the class of 1965. Following his graduation, he went on to serve his country in the National Guard. On Feb. 22, 1974, Ron married Barbara Newman in Austin. They made their home in Austin and were blessed with five children. Ron worked as an energy tech for Semcac in the weatherization program for over 25 years, retiring in April 2005. Ron was a hard worker and loved to stay busy. He enjoyed boating, riding motorcycle, hunting, fishing, collecting Coke memorabilia and playing Yahtzee. Ron most enjoyed the time he spent with his family. 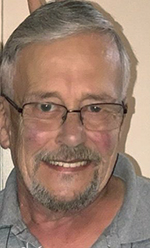 Memorial services for Ron will be at 2 p.m. Thursday at the Worlein Funeral Home in Austin with Capts. David and Laura Amick officiating. The Johnson family will greet friends from noon to 2 p.m. prior to the service at the funeral home on Thursday. Interment will be in Grandview Cemetery in Austin. Services are prearranged and performed by Worlein Funeral Home of Austin. Condolences may be expressed to the family online at www.worlein.com.